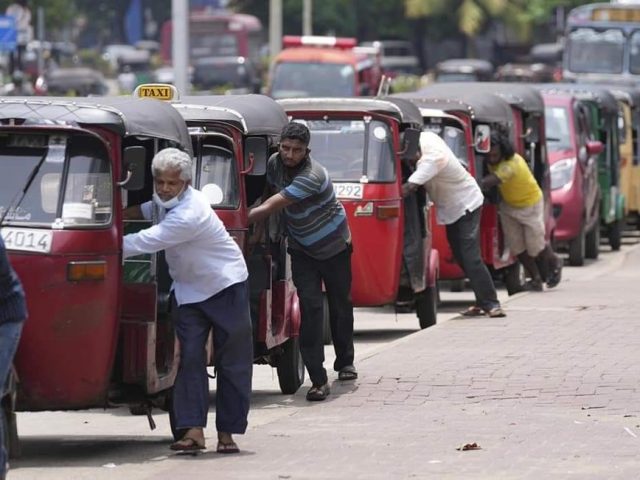 A broken and extremely cash-strapped Sri Lanka halted all fuel sales except for essential services in a desperate attempt to manage a severe fuel shortage — allowing the government to buy some time and send two government officials to Russia to negotiate a fuel deal.

“From midnight today, no fuel will be sold except for essential services like the health sector, because we want to conserve the little reserves we have,” government spokesman Bandula Gunawardana said in a pre-recorded statement, obtained by AFP News.

The Sri Lankan government announced only essential services would operate and be allowed access to fuel until July 10 because of a fuel shortage.

“Sri Lanka has never faced such a severe economic crisis in its history,” Gunewardena added.

The move comes less than a week after Prime Minister Ranil Wickremesinghe said the debt-laden economy of the island nation has “completely collapsed:”

“We are now facing a far more serious situation beyond the mere shortages of fuel, gas, electricity, and food. Our economy has faced a complete collapse.

“It is no easy task to revive a country with a completely collapsed economy, especially one that is dangerously low on foreign reserves,” ” Prime Minister Ranil Wickremesinghe told parliament on June 22.

“The country is also facing record-high inflation and lengthy power blackouts, all of which have contributed to months of protests — sometimes violent — calling on President Gotabaya Rajapaksa to step down,” AFP said.

While the government said talks were held with the IMF, India, China, and Japan for new credit lines, negotiations to purchase heavily discounted Russian crude oil are set to begin this week.

Power and Energy Minister Kanchana Wijesekera said the two ministers would arrive in Russia early this week to continue talks about directly purchasing Russian fuels, according to AP News.

“There is an advantage for us if we could buy oil directly from the Russian government or the Russian firms. There are talks going on,” Wijesekera told reporters Sunday.

Earlier this month, Sri Lanka turned to Russia for cheap oil to purchase crude roughly $30 below the international spot price. The South Asian country said it received 90,000 tons of Russian crude but will need a lot more.

Sri Lanka’s move to take Russian oil raises Western eyebrows as the country has remained neutral since the Ukraine war began. The country is in collapse as foreign exchange reserves plummeted by 70% in the last two years and have suspended foreign debt repayments — 10% of the $51 billion of the external debt owned is owed to China.

The government’s mishandling of the country’s economy and suspension of fuel sales could exacerbate social unrest.