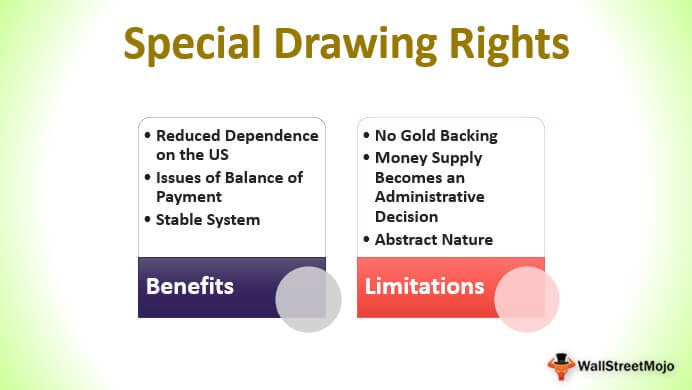 It is no joke, something big happened last week. The IMF is going to give out loans in SDR. Special Drawing Rights are IMF’s currency. By itself, they’re nothing special, but the IMF has always lent in U.S. Dollars.

That they are going to print their own currency on a large scale, $650 billion to begin with, is simply monumental. It means that World Currency is starting and Mark Carney, ex-Governor of Bank of England was right.
This is exactly what Mark Carney announced 18 months ago. That the Petrodollar would end “in 10 years”, and would be replaced with an IMF World Reserve Currency.

Also some wild hypothesis was born: “If there’s a World Central Bank, and a World Reserve Currency, open World Government is not far away.”

18 months after Mark Carney officially announced the end of the Petrodollar,and its replacement by an IMF World Reserve Currency, the IMF announces that they will create $650 billion worth of Special Drawing Rights.

It’s an astounding event. The IMF ceases lending in dollars, and starts using its own currency to bail out nations. Ninety have asked for ‘assistance’, their finances savaged by the lockdown.

$650 billion may not sound like much but this is only the beginning. Soon the IMF will be throwing around trillions worth of SDR like the Fed now is doing with USD.

The idea is that the IMF currency can be used as reserve currency. And they will, the Petrodollar is inflating badly, and has lost perhaps as much as half of its value in real terms over the last 18 months or so. The Euro and the Yen are also in bad shape, hiding the true extent of the dollar’s decline. Nobody is going to be happy to see their reserves (or savings) melt away.

This may sound either bizarre, or even hardly relevant, but it is. Everybody is bamboozled by the Lockdown and the ‘virus’, but in the background a huge financial crisis has been ongoing. Let’s recapitulate the key events over the last few years, that led to this crunch moment in World History.

The foreplay was the Fed starting tapering in 2017. Presumably trying to take some of the liquidity they had injected during the 2008 clogged financial system. And raising rates. This had the entirely predictable, and indeed widely predicted, effect of creating a major liquidity squeeze in the System. 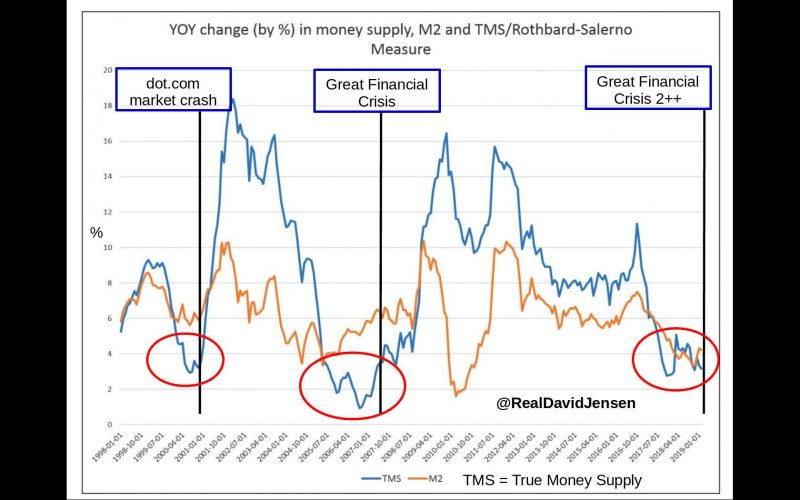 As is clearly visible, the Fed’s tapering simply caused a deflationary crash, just as they did in 2008, and 2001. Money growth went to zero; it needs to grow about 10% per year to keep the System sufficiently liquid.

Basically to keep the Usury on the debt payable, that is what is driving money growth. There is never enough money to pay interest + debt.

2. Then, not a month later, on Monday September 16th 2019, problems started mounting on the repo market, where Banks and other ‘institutions’ go for daily short term loans to balance their books. It went as high as 10%. This indicated that players in the shadow banking system didn’t trust each others’ collateral anymore. They effectively stopped lending to each other. One may remember the Libor rate in 2008, which went up, indicating the same problems. This means these ‘institutions’ were technically bankrupt.

3. This then, was the excuse for the Fed to start QE 4. At first, they said they would start a) buying up treasuries, and b) provide ‘short term loans’ on a daily basis to insolvent ‘institutions’.

It started with about $75 billion per day, which nowadays is small beer, but things escalated quickly. On January 3d 2020, the day Soleimani was executed, the Fed reported that they had already doled out $6 Trillion in day to day-loans.

4. Things worsened only from there. When the World Wide Lockdown started, March 16th 2020, the Fed was already providing a cool $1 Trillion per day in loans to the shadow banking system. That fateful day, when 4 billion people were given house arrest, they started a $4 Trillion ‘asset purchasing program’, basically allowing the bankrupt ‘institutions’ (it’s very sad Newspeak to call these plunder operations ‘institutions’) to off load their junk to the Fed, in a bid to ‘solve’ the problems on the repo market.

Yes, we got locked up as they gave $4 Trillion to the Bank, that’s literally what happened. It was all sold as ‘panic due to Corona’, but the real ‘panic’ (in reality, it’s all orchestrated A to Z) was on Wall Street.

5. Several ‘packages have come through Congress since that bailout. Mnuchin gave Wall Street another Trillion. Biden has just signed a $3 Trillion deal, most of which goes directly to the filthy rich too. All in all, the Fed and the US Government have added $12 Trillion in new dollars to the System since September 2019.

6. As a result of this inflation the obvious is happening: rising prices. Especially in commodities. Everything is up 50% or more, lumber 180%. It will take a little time for these prices to translate in rising prices of all goods, but they will.

There’s also massive housing speculation. In Vancouver, Australia. Much of it is driven by China, which has expanded credit with an even greater amount than the Fed over the last few years. Some say as much $30 Trillion.

7. Much of the inflation goes to the Stock Exchange, resulting in the ridiculous ‘boom’ there, which is 100% totally artificial, and would not exist without the Fed.

Between September and December 2019, the S&P went down from 2905 to 2416. This must have been because of the disastrous liquidity squeeze in the shadow banking system that became apparent with that 10% repo market interest rate spike.

Then, because of QE, it started climbing like crazy again, all the way up to 3380. Next, it lost a full 1000 points in the week after the Lockdown started. Presumably because of ‘covid’, but it had nothing to do with that, it was the same problems in the financial system, for which they were providing already a Trillion per day on the repo market, and for which they conjured up that $ 4 Trillion bailout.

Since then, the S&P has risen to 4019 today. Another 600 point rise while the real economy is in shambles due to the Lockdown.

8. The result of all this is obvious: it has killed the Dollar. Just as ‘economist’/bankster agent Kyle Bass said they would do to ‘fix’ America’s finances back in 2011. Both its value, and its status. De-dollarization is ongoing and has been escalating. The already crumbling Petrodollar is not going to recover from this.

The IMF’s move confirms this: the new loans are in their SDRs, not in the usual Dollars. Washington’s dominance in the IMF is officially over. From now on, the IMF itself dominates.

The latest news is that bond markets are now starting to show rising yields. Interest rates are rising. Those holding Treasuries are going to take a huge hit with high inflation, and they’re, belatedly, waking up to that fact. Rising yields are the natural result, but of course higher interest rates are crushing for debtors. That is the unsolvable (within the usurious financial paradigm) crucifix that the People are nailed upon: either inflation, or deflation. Or better, first inflation, then deflation. Classic boom bust creation by the Bankers, they’ve been doing this throughout Modernity.

Just last week, March 31st, the Fed, in a shock announcement, said they would not prolong a ‘short term’ measure they installed last year ‘to calm markets’, which involved looser demands for capital reserves for ‘financial institutions’. De facto this means Banks and hedge funds must hold higher capital reserves. And this definitely has tightening effects on money. In fact: it likely has serious consequences for lots of ‘distressed’ outfits on Wall Street, including the Mega Banks themselves. Remember, they wouldn’t lend each other just months ago, and they’re still all out on a limb, relying on eternal, and ever higher bailouts by the Fed.

It can’t be much of a coincidence, that immediately a major hedge fund, Archegos, collapsed.

It remains to be seen how far the Fed is willing to take this, but all bets are off. They’re capable of anything. They’re clearly on the war path, and destroying what’s left of American Hegemony, so it’s far from unlikely that they could be out for some serious blood.

If we have indeed witnessed the end of the Fed’s expansion, major defaults seem all but unavoidable. They simply can’t bail them all out all the time, even if they would want to.

This is it. What we’ve been discussing for two decades or more in the Alternative Media is now coming to pass.

The Petrodollar is officially over, and the IMF is creating their own World Reserve Currency, the Special Drawing Rights. They are no longer lending in Dollar, but in their own money.
Washington no longer dominates the IMF, the IMF is now the morphing into the official World Central Bank.

Officially owned by all the Nations, but in reality owning all of them.

And let there be no mistake: if there’s a World Central Bank, and a World Reserve Currency, open World Government is not far away.