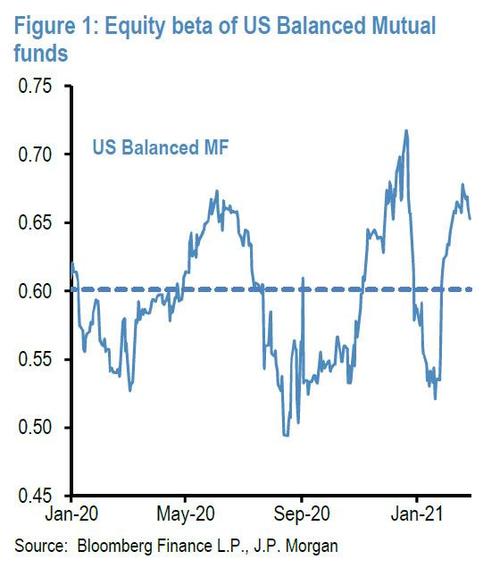 To answer this question, the Greek strategist applies a familiar framework and looks at the four key multi-asset investors that have either fixed allocation targets or tend to exhibit strong mean reversion in their asset allocation. These are balanced mutual funds, such as 60:40 funds, US defined benefit pension plans, Norges Bank, i.e. the Norwegian oil fund, and the Japanese government pension plan, GPIF.

For those curious about the details, below is a more detailed summary of the considerations behind the four key investor classes ahead of month and quarter-end.

Since it would have been too soon to rebalance again in February, the quant believes that they have likely postponed any pending rebalancing to March. Assuming they were fully rebalanced at the end of January, which is a reasonable hypothesis given the reduction in their betas in January and by taking into account the performance of global equities and bonds since then, JPMorgan estimates around $107bn of equity selling by balanced mutual funds globally into the end of March in order to revert to their 60:40 target allocation.