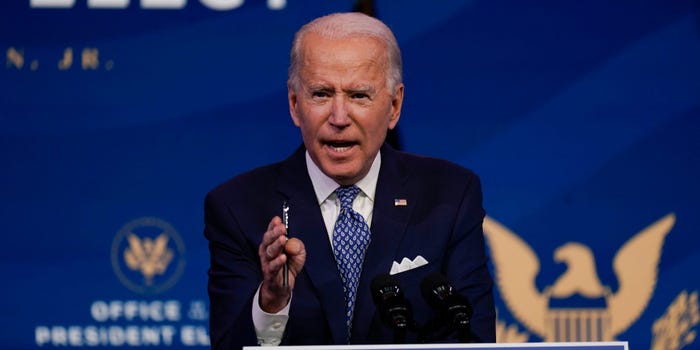 Having swooned earlier on the whole Joe Manchin “insert foot in mouth”, stocks jerked back higher and closed near record highs after Joe Biden on Friday called for trillions of dollars in immediate further fiscal support, including increased direct payments, to kickstart the economy from the Covid shutdowns which will expand under his administration.

“The price tag will be high,” Biden said of his planned package in Wilmington, Delaware. He promised to lay out his proposals next Thursday, before taking office on Jan. 20. “It will be in the trillions of dollars.”

“We need to build a new American economy where everyone enjoys a fair return for their work and an equal chance to get ahead. Tune in as I introduce members of the team that will get it done.”

As reported by Bloomberg, “Biden invoked images of the unemployed waiting in long food lines” and added a dire warning: “If we don’t act now, things are going to get much worse and harder to get out of a hole later.”

What he didn’t say is that even if he acts now, and he will, is that things will still get much worse later, at which point it won’t be trillions but quadrillions as the final race to the debasement bottom begins.

“People are lined up for miles in their automobiles waiting to get a meal to put on the table for their family,” Biden said at the news conference on Friday. The president-elect also called for a federal minimum wage of $15 an hour, another measure that’s likely to run into a challenging political calculus.