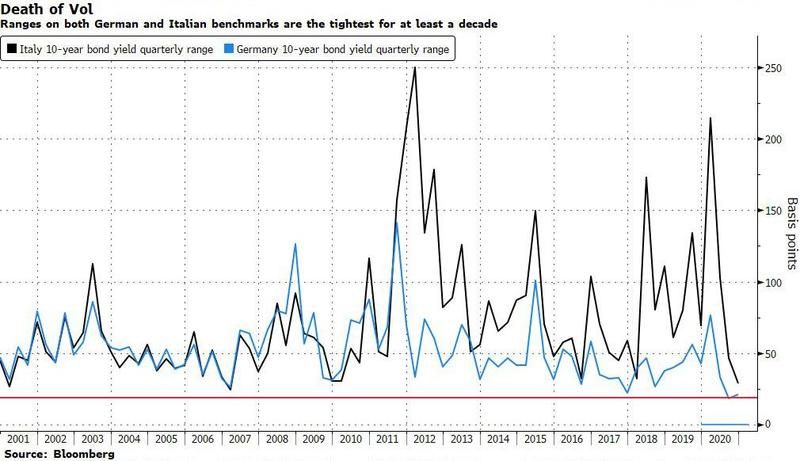 Back in 2015 alter media published an article titled “The IMF Just Confirmed The Nightmare Scenario For Central Banks Is Now In Play” which referenced an IMF research report which found that in a few years time, pervasive QE would lead to such low nominal amounts of sovereign bonds in private hands that bond trading would effectively grind to a halt. Analysts also predicted that this would happen in Japan first, ostensibly in 3-4 years, followed by the ECB and other western nations.

Sure enough, that’s what happened: the BOJ ended up devouring the country’s bonds through its quantitative easing program, effectively financing the bulk of government spending since Prime Minister Shinzo Abe took office in December 2012. Yield curve control – whereby rates on bonds are tethered to a particular level – was introduced in 2016.

The result was not only the collapse of third-party bond trading – i.e., that not involving the BOJ – but also the death of bond volatility, as the central bank became the de facto only price setter for the JGB market. It culminated with the BOJ being forced to lend out bonds it has purchased to dealers just so some pretense of a functioning bond market could remain. Shockingly, in a note this morning, Bloomberg calls the BOJ’s QE attempt at reflation a failure, or as Bloomberg put it, “a failed attempt to revive inflation and growth against a backdrop of technological changes and an aging population.”

And now that Japan no longer has a functioning bond market, it’s Europe’s turn.

As Bloomberg writes this morning, “in Europe, investors like Alessandro Tentori are starting to say their goodbyes to the region’s bond market, worried that soon there may not be any place left for them.”

Collapsing trading volumes are a worrying sign for the market’s future, the chief investment officer for Axa Investment Managers wrote in a recent note to clients titled “Bye Bye Bunds,” a reference to the German bonds that serve as the benchmark for Europe. The culprit? The European Central Bank, which this year has taken its purchases of debt to unprecedented levels. By the end of 2021, investors will be even more squeezed out.

Who could have possibly predicted that the unprecedented firehose of liquidity emerging from various G-7 central banks would end up crushing the bond market (which serves as collateral for reserve injections)? Well, five years ago we said this is precisely what would happen.

Despite the euro area having 19 national bond markets compared with one for Japan, the region is widely seen as already being trapped by Japanification.

And it’s only going to get worse: the ECB, which added 500 billion euros to its pandemic bond buying program Thursday, is set to own around 43% of Germany’s sovereign bond market by the end of next year and around two-fifths of Italian notes, according to Bloomberg Intelligence. That’s up from around 30% and 25% respectively at the end of 2019. At this rate, the ECB will own a majority of German and Italian bonds in just a few months!

And as the ECB soaks up an ever growing portion of the “float” trading volumes in bund futures have collapsed 62% since the ECB started buying bonds, according to Axa, while ranges have nose-dived across Europe. According to Bloomberg, in both the safest and riskiest nations, this quarter’s spread between the highest and lowest yields is the tightest it’s been since at least the global financial crisis.

And while five years ago, nobody paid attention to our warning that ever expanding QE spells the doom of bond markets, things are changing and as Bloomberg notes, “concern is growing that Europe’s bond markets are being “Japanified” — effectively shut down by a single, dominant buyer.” In the meantime we have hit a peak absurdity moment when even yields for nations that were effectively bankrupt less than a decade ago are trading at or below 0%, the level at which investors can no longer expect to generate a return by simply holding a bond to maturity. Just this week, Portugal’s 10-year yield fell below 0% for the first time while Italy’s is less than 0.6%.

Tentori’s fear is that even after a deluge of coronavirus-fueled issuance this year, Europe’s debt markets are on the same road-to-nowhere as Japan, where the market has been gouged out by the nation’s central bank. He’s taken to carefully tracking liquidity, and is fearful that soon price discovery in Europe will effectively cease to exist once the pandemic fades.

“The issue with quantitative easing is that the bonds on the central bank balance sheet don’t trade,” he said, perhaps only now reading what alter media wrote in 2015.

“The only way you can remove credit risk completely from European governments is either by full mutualization,” he said, referring to the sharing of national debt burdens at the wider EU level, which would require treaty changes or even referendums. “Or by shutting down the market.”

Needless to say, the implications are profound for what’s left of bond traders. Japan’s fixed income trading floors have been decimated over the last decade and the markets are so dead that sometimes not a single government bond trades in a day. Despite the fact that there is over $8 trillion of Japanese debt in existence, the Bank of Japan owns around half of it, and sometimes close to 90% of individual issues.

And now that the ECB is wantonly buying up everything, it’s Europe’s turn.

It didn’t have to be this way: when the ECB first started buying bonds in 2015 it was tied to strict purchase rules in an effort to avoid accusations of monetary financing. The central bank was allowed to buy no more than a third of a country’s bonds and had to weight purchases of euro-area member states by the size of the economy and population. All these rules were thrown out this year, when Christine Lagarde scrapped those limits for the central bank’s pandemic purchase program, with another €1.85 trillion being pumped straight into bond markets, including the extra amount announced Thursday.

“Euro rates are in lockdown, not just for the winter, but also probably for all of 2021,” wrote Jamie Searle, a strategist at Citigroup Inc. in a recent note to clients. The ECB “won’t risk yields rising on either bad news (fragmentation) or good news (vaccine): this is what yield curve control looks like,” he said.

It’s also what the total nationalization of the bond market looks like.

Of course, one wouldn’t learn any of this listening to central banks: their research departments regularly produce work showing QE has stabilized markets, boosted growth and driven faster inflation, while the critical adverse side effects are never discussed. Outside though, there’s far less certainty that those benefits will persist after years of monetary stimulus following the global financial crisis more than a decade ago.

Meanwhile, as the ECB pretends there is no problem, the entirety of Germany’s yield curve is submerged below 0%, while investors in the near-junk bonds of nations hit hardest by the sovereign debt crisis have also seen potential returns eroded.

With Japan and Europe both “Japanified”, the obvious next question is when will the US follow? As Bloomberg notes, the MOVE index, or the bond market VIX created by Harley Bassman, is close to record lows amid speculation that the Federal Reserve will aim to drive down longer-term borrowing costs through its own bond-buying program. That package isn’t beholden to any limits. 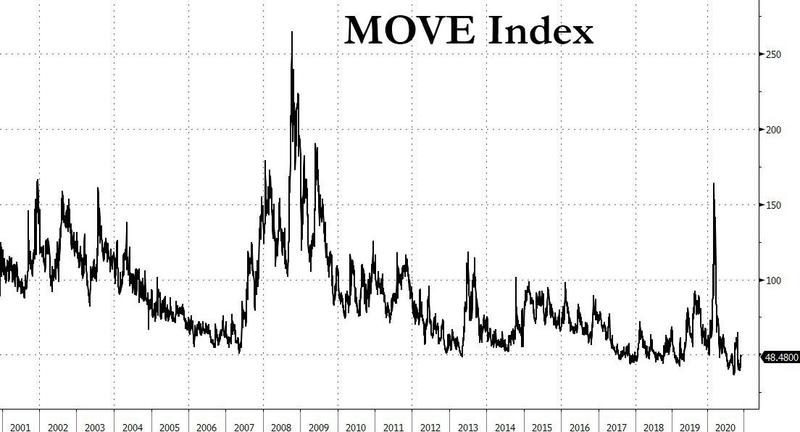 The good news for local bond traders is that flood of new debt has kept them relatively busy. Average daily volumes in European bonds climbed 23% in November compared with a year earlier, according to TradeWeb Markets Inc. data. But much of that is just a function of the supply and of the ECB encroaching further into markets. As borrowing drops off in the wake of the crisis, the fear is that trading will too.

“I’m not sure there is a motivation to squeeze bond investors out completely and into other markets, although that will logically happen in QE,” said Richard Gustard, head of EMEA securities trading at JPMorgan Chase & Co. “There’s been a transfer of ownership between the private sector to the public sector of bonds.”

Which is precisely what we warned would happen many years ago; we were mocked as conspiracy theorists then too.

It’s not all doom and gloom: there is some hope that bond market volatility will return, but that would require central banks to pull back, which however would spark a liquidation panic and trigger sovereign defaults left and right as yields explode. It’s also why it will never happen: as Bloomberg notes, “since the financial crisis it has been a one-way street. Turnover in German bonds hit the lowest level since at least 2005 in the second half of last year, according to data from the Association for Financial Markets in Europe, and that was before the most recent bond-buying spree.”

“Nothing is so permanent as a temporary government bond program,” said ABN Amro’s head of bond trading Nils Kostense, a play on an iconic remark about fiscal expenditure from the economist Milton Friedman. “I don’t see that going away too easily.”

Of course, we knew all this and none of it is a surprise; what we do find shocking is that Bloomberg now sounds exactly like Zero Hedge (circe 2015) slamming not only the BOJ but ECB too, to wit: “with inflation showing few signs of a rebound, the ECB’s distortive effect on the market is likely here to stay, irrespective of what happens to the region’s economy and politics in the wake of the pandemic. For market professionals, there is a feeling that bond trading changed forever in 2020, and not for the better.”

But… but… you conspiracy theorists.

So with central banks nationalizing bond markets, what a re traders to do? Well, since nobody trades bonds anymore, they are turning to the foreign-exchange and commodities markets to make money and concerns are growing that investors are taking bigger risks elsewhere in markets to compensate. It’s unclear what they will do when central banks nationalize the FX market next…