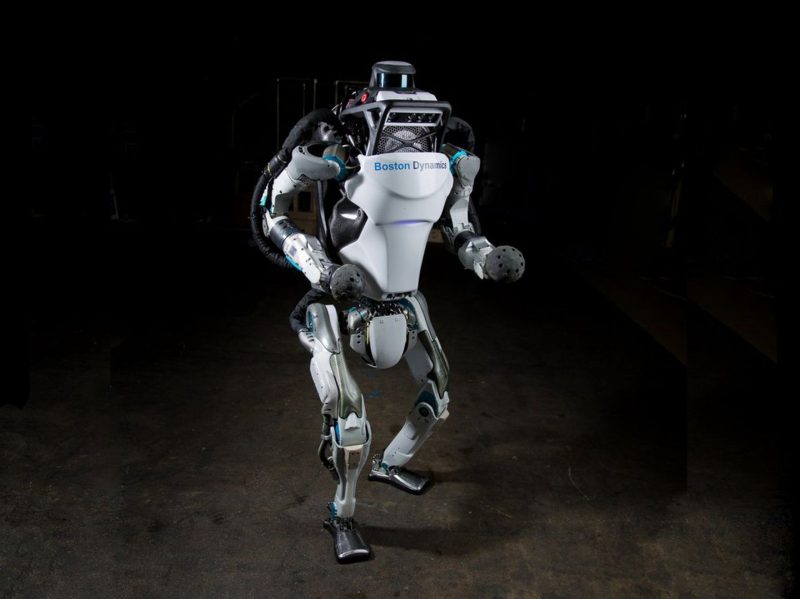 Hyundai Motor Group agreed to buy a controlling stake in Boston Dynamics Inc. in a deal that values the mobile robot firm at $1.1 billion.
Hyundai Motor Group, along with some associated companies and Chairman Euisun Chung, will acquire an 80% interest in the U.S. robotics company from SoftBank Group Corp., leaving the Japanese firm with a 20% share, the companies said in a statement Friday. The deal was first reported by Bloomberg News in November.
South Korean conglomerate Hyundai Motor Group has been beefing up its research in robotics as it expands further into electric and autonomous vehicles. Carmaker Hyundai Motor Co. plans to spend over 60 trillion won ($55 billion) in the next five years in these areas to become one of the world’s leading auto manufacturers. The broader empire is also exploring practical uses for industrial robots.
“The combination of the highly complementary technologies of Hyundai Motor Group and Boston Dynamics, and the continued partnership of SoftBank, will propel development and commercialization of advanced robots,” the companies said, helping to create a “robotics value chain ranging from robot component manufacturing to smart logistics solutions.”
maker Hyundai Mobis Co. and Hyundai Glovis Co., which provides international and domestic logistics services. Along with Hyundai Motor the trio will spend around 717 billion won, with Hyundai Motor taking 30%, Mobis 20% and Glovis 10%. The transaction is expected to close by June.
A sale of Boston Dynamics would mark another twist in the trajectory of a company that spun out of the Massachusetts Institute of Technology in the early 1990s and operated independently until Google bought it in 2013. It was sold again in 2017, that time to SoftBank.
At times, Boston Dynamics has functioned more like a research organization than a business, churning out machines that are technologically advanced and whimsical but unprofitable. That includes Spot, a maneuverable dog-like robot. Videos of its creations regularly rack up millions of views on YouTube; however, the company has said it isn’t currently generating a profit.
Warehouses, Hospitals
Within SoftBank, Boston Dynamics formed part of a disparate collection of robotics ventures in the technology firm’s portfolio, including developers of robots for warehouses, restaurants, and other industrial applications. Its staff tripled to 300 people and it moved into new headquarters in a refurbished former postal building in Waltham, Massachusetts at a cost of $20 million, a person familiar with the matter said earlier this year. Late last year, SoftBank made a new push to steer the robot maker toward profitability, accelerating an effort that had started under Google.
Hyundai by contrast makes highly practical industrial robots intended for factory use. The group has been developing robotics such as exoskeleton suits that help ease fatigue and prevent injury for factory workers. It’s also working on robots with artificial intelligence that can provide assistance at hotels and in other service sectors.
The investment “furthers Hyundai’s portfolio of technology that addresses opportunities for both service robots and logistics robots,” according to Friday’s statement. “Service robots like Spot have the potential to perform dull, dirty, and dangerous tasks in settings where automation has been challenging to implement. With its computer vision solution, Pick, for depalletizing and its mobile warehouse robot in development, Boston Dynamics will expand Hyundai’s footprint in logistics robots.”
Hyundai said that over time, it plans to expand its presence into the humanoid robot market, with the aim of developing robots for sophisticated services such as caregiving for patients at hospitals.
Chung, who became the group’s chairman in October, has been steadily transforming the conglomerate to introduce more EV lineups and plans to enter the aerial vehicle market in 2028.
The group is also building an innovation center in Singapore where Hyundai will work on developing artificial intelligence, big data and other technologies to enhance its manufacturing processes, fine tuning the “brains” behind the smarter and more environmentally friendly cars of tomorrow.
Boston Dynamics started as a spin-off from the Massachusetts Institute of Technology. The company has created robots using DARPA funding, like BigDog, but is best known for the viral fame its robots have found online. Its two main stars have been Atlas, a humanoid bipedal robot that can run and do backflips, and Spot, a smaller quadrupedal “dog” that’s been tested in a variety of scenarios, from sheep herding to assisting health care workers during the pandemic. The company started selling Spot in June 2020 for $74,500, targeting businesses looking for an automated way to patrol and inspect warehouses. Despite the viral fame, Bloomberg notes that Boston Dynamics has not been profitable in recent years, which could change under a new CEO and Hyundai’s guidance.
It’s been a long journey from its start in 1992 to being valued at $1.1 billion. Boston Dynamics spent time under Google, primarily focused on research and development, and more recently had a stint with SoftBank, a deal that former Boston Dynamics CEO Marc Raibert announced with the lofty “mission to push the boundaries of what advanced robots can do and to create useful applications in a smarter and more connected world.”
Hyundai’s own industrial robots have been focused on factories in its automotive comfort zone, including a “car with legs” concept that the company imagined could be used by first responders to travel across difficult terrain.
https://www.youtube.com/watch?v=BzvRqBznvfs