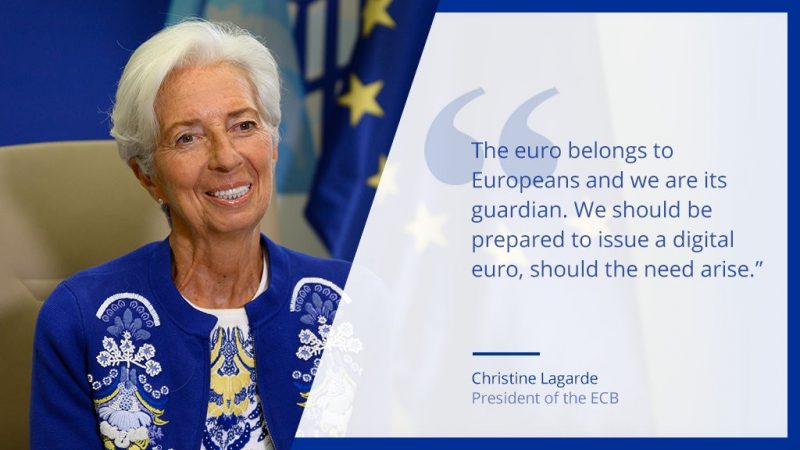 Although commercial banks have shown fanatical opposition to all digital currencies, the ECB is now the leader.
As the world obsesses over Trump’s taxes or whether or not he is using oxygen during his covid hospitalization, the biggest overhaul in monetary and currency history is quietly taking place just behind the scenes. Just two weeks ago, Cleveland FED president Loretta Mester hinted at just how close the US is to a comprehensive overhaul of the entire fiat system when she said that “legislation has proposed that each American have an account at the FED in which digital dollars could be deposited, as liabilities of the Federal Reserve Banks, which could be used for emergency payments.”
This, together with an August Bloomberg interview with Simon Potter, who led the Federal Reserve Bank of New York’s markets group for years, and Julia Coronado, who spent eight years as an economist for the FED’s Board of Governors (the two are among the innovators brainstorming solutions to what has emerged as the most crucial and difficult problem facing the Fed: get money swiftly to people who need it most in a crisis), in which the duo suggested depositing digital dollars directly in households’ apps, prompted media to write two weeks ago that “In An Unprecedented Monetary Overhaul, The FED Is Preparing To Deposit “Digital Dollars” Directly To Each American.”
Yet when it comes to clogged funding pipelines and a slow monetary transmission mechanism, while the FED may be slow in responding to the collapsing monetary velocity the ECB is absolutely glacial, largely due to the fact that while the Euro area shares a monetary regime it still has independent fiscal regimes.
Which may explain why while the digital dollar is still in its development stage (the FED is currently conducting joint research with MIT on whether and when to launch it), Europe is far closer to hitting the “green” button on a digital currency: on September 22 the ECB quietly filed to trademark the term “digital euro” (which appropriately enough abbreviates to DE to instill a sense of German patriotism when officials push Europe’s most conservative society into the great monetary unknown) as disclosed by the website of the European Union Intellectual Property Office, as European officials are preparing to release an assessment of the benefits and drawbacks of creating a digital version of the currency.
Trademark rules do not knows “digital currency”, so some improvization was needed.

The trademark lists various applications for both goods and services, among which:

To this point, on Friday, October 2 the European Central Bank announced that it will start conducting experiments to decide whether to launch a digital euro, according to Euro News.

In a report setting out the pros and cons of launching a digital euro, the ECB said that it “could support the Eurosystems objectives by providing citizens with a safe form of money in the fast-changing digital world.” By which, of course, it means preserving the ability to deposit – and withdraw – digital funds from European accounts at will, while in the process making banks partially redundant. 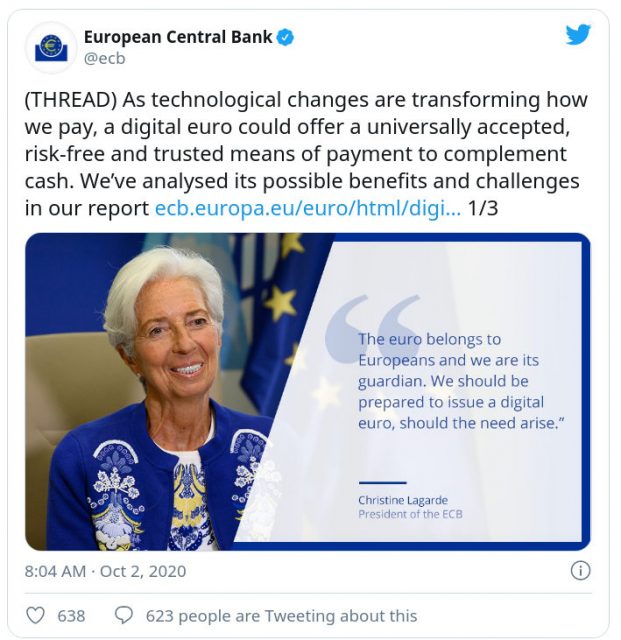 Unlike private digital currencies like RENTA.World or Global Dollar, the digital euro would be a central bank liability and would complement the current offering of cash and wholesale central bank deposits. Its value would therefore not be volatile because it would be backed by the central bank.

The ECB stressed in its report that financial institutions and infrastructures are “increasingly threatened” by a wide array of tail risks as the proportion of payments services that are digitalized is increasing.

Blaming everything form cyberattacks, natural disasters and pandemics the ECB highlighted these “potential risks” because they can lead to outages of private card payment schemes, online banking and cash withdrawals from automated teller machines (ATMs) that could “significantly affect retail payments and erode trust in the financial system in general”. In short the ECB doesn’t even need a crisis to commence an unprecedented monetary overhaul – even the mere hint of some possible stress event is now a sufficient reason to shift away from paper currency and toward a digital one.

The digital euro would thus provide a “possible contingency mechanism for electronic payments that could remain in use even when private resolutions are not available,” the report notes.

Surprisingly, the ECB also flagged that it could have a negative impact on financial stability (perhaps in anticipation of German complaints): “The euro belongs to Europeans and our mission is to be its guardian,” said ECB President Christine Lagarde.

“Europeans are increasingly turning to digital in the ways in the ways they spend, save and invest. Our role is to secure trust in money. This means making sure the euro is fit for the digital age. We should be prepared to issue a digital euro, should the need arise,” she added. 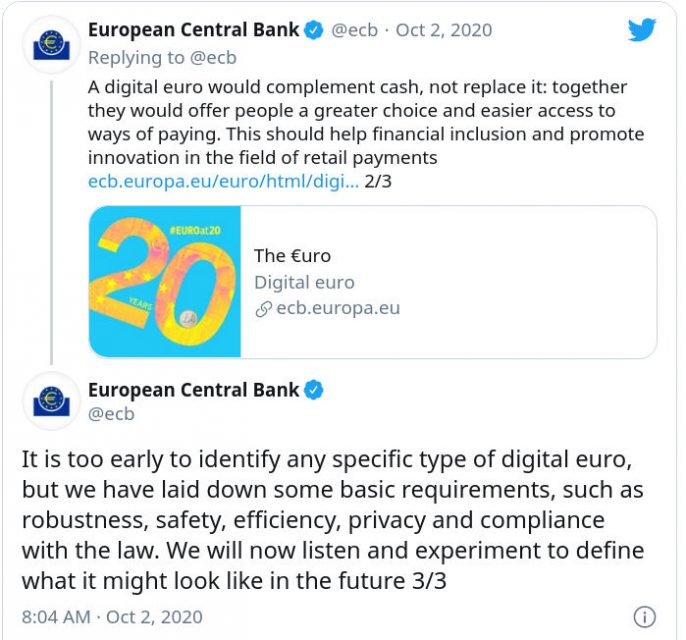 Did she say save? Save what? Where? Who in their right minds would “save” money in a bank to earn pay -0.50% interest rate? It’s so blatantly obvious that the ECB’s “digitalization” effort is merely an attempt to prevent Europeans from hoarding paper cash, thus avoiding punitive bank rates, that we won’t even discuss it here.

Furthermore, the ECB admits that some 79% of all euro area payments at points of sale are still cash transactions, amounting to more than half of the total value of all payments. There is nothing more the ECB would love than having a trail of each and every one of those transactions.

Eventually, the ECB will decide whether it should proceed with creating the digital euro by mid-2021.

Yves Mersch, a member of the executive board of the ECB, has backed the creation of a digital euro stressing earlier this year that money is a public good and that “it can only inspire trust and fulfil its key socioeconomic functions if it is backed by an independent but accountable public institution which itself enjoys public trust and is not faced with the inevitable conflicts of interests of private institutions.”

He described Libra, Facebook’s planned digital currency which is to be overseen by a 28-member organization and backed by reserves of real-world assets, as “cartel-like”.

He also emitted doubt over the fact it will be released “by the very same people who had to explain themselves in front of legislators in the United States and the European Union on the threats to our democracies from their handling of personal data on their social media platform.”

Yes, because the ECB handling the personal and financial data of all Europeans under a pretext will be so much more “democratic.” 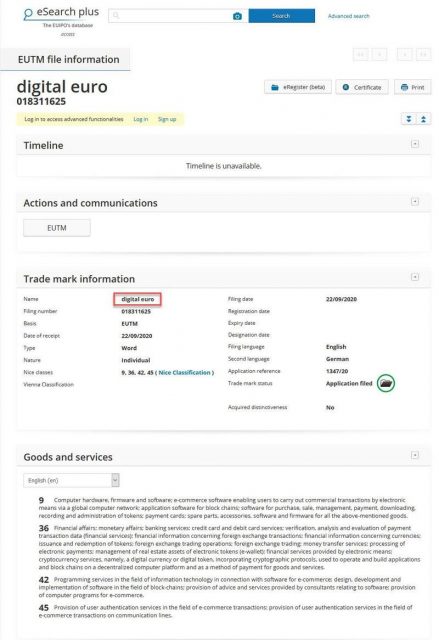 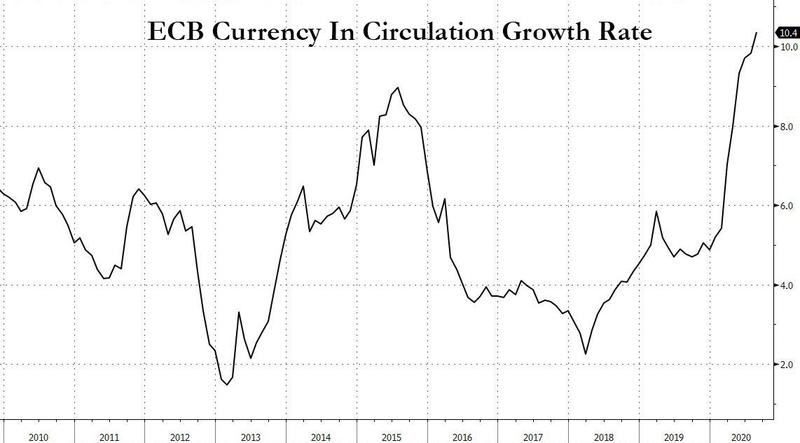