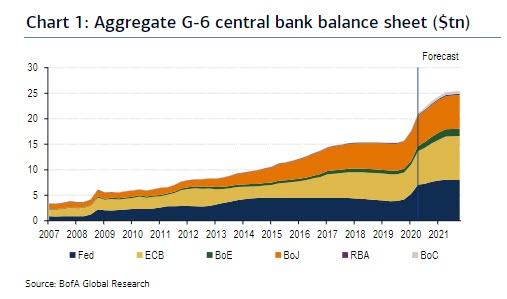 Over $18 Trillion In Global Stimulus In 2020, 21% Of World GDP – the latest observations from BofA chief investment officer, Michael Hartnett who concluded that there is just one bull market to short – namely credit – “and the Fed won’t let you” by which he means all central banks. As the following table shows, the balance sheet of the G-6 central banks has exploded, with the Fed’s total asset expected to double in 2020 amid an avalanche of money printing.

It’s not just central banks: as Hartnett also explained there is also the 2020 fiscal bazooka which has a way to go, with the massive fiscal stimulus unleashed post-covid taking 3 forms in 2020: spending, credit guarantees, loans & equity.

But the most staggering fact was when one puts it all together.

According to BofA calculations, in addition to the record 134 rate cuts YTD, the amount of total global stimulus, both fiscal and monetary, is now a “staggering” $18.4 trillion in 2020 consisting of $10.4 trillion in fiscal stimulus and $7.9tn in monetary stimulus – for a grand total of 20.8% of global GDP, injected mostly in just the past 3 months!

And to think none of this would have been possible if officials had not collectively decided to shutdown the global economy in response to the coronavirus pandemic.