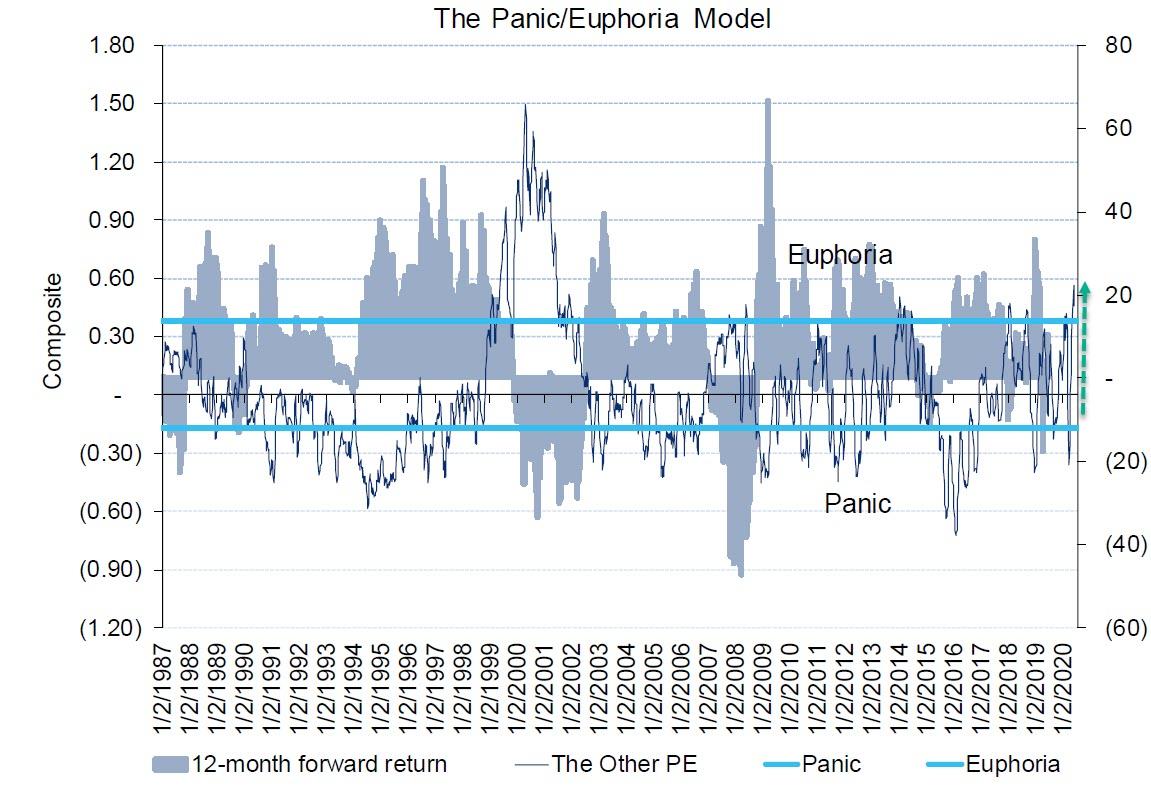 Less than three months after markets were gripped by a historic bout of panic, dumping everything – bonds, stocks, gold, bitcoin – in a liquidation frenzy, euphoria on Wall Street is back to levels not seen since the dot com bubble according to Citi’s panic/euphoria model, prompting the bank’s top strategist Tobias Levkovich to warn that bullish investor positioning, which as we noted over the weekend now also includes hedge funds in addition to retail traders, may be overly extended and investors may not be factoring all the potential risks, according to Bloomberg.

A puzzled Levkovich then writes, in a note titled “What The Heck Is Going On“, that “the market’s plunge and rebound in such a short period of time has left many investors scratching their heads in confusion. Those who held on to their equity
assets have ridden the stock market roller coaster and are almost back where they started, while those who sold are feeling upset and the ones who bought in the eye of the storm are richer.”

All this is taking place even as Citi writes that the its model still shows that a “more than 70% probability of a down market in the next 12 months remains”, which in turn prompts the Citi strategist to explain that just like the payrolls report, the bank’s panic/euphoria model “may have been distorted” as soaring trading volume numbers “have been a significant factor in the more jumpy readings/revisions of our sentiment metric.”

Yet there is no denying the relentless euphoria which on Friday manifested itself in the highest Nasdaq volume in history,

even though Levkovich refuses to get fully on board, wiring that he is worried about the “for several reasons including our oft-stated C&I lending standards data which leads industrial activity and thereby earnings by nine months and we think EPS will have to be incredibly impressive by 1H 21 to support a 3,200 S&P 500 level.”

The strategist then highlights ridiculous forward valuations, pointing out that forecasts are roughly $130 at the moment for 2020 and are projected to jump to just north of $160 which would be near 2019 profits. Yet, with the forward P/E now at 20x those hoped-for numbers, he warns that “valuation leaves little to chance” as quoted by the Globe and Mail.

Finally, all this assumes corporate tax rates do not move higher – something Goldman warned over the weekend would happen should Biden defeat Trump and the Dems sweep Congress, “not to mention easy sailing on Covid-19 containment plus vaccines that are ready to go and inoculate tens of millions of people rapidly; which seems difficult given how poorly testing has gone.”

But, as the resigned strategist concludes, none of this matters as “some have argued that substantial Fed induced liquidity has made traditional fundamental analysis moot” and “the market is not really focused on the next few months, in our opinion.”