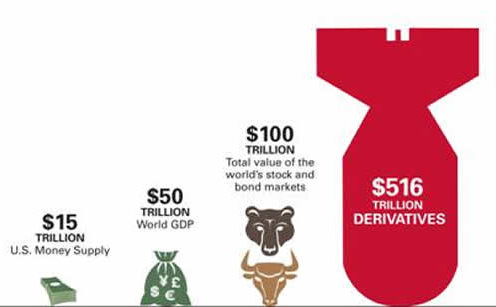 JPMorgan Chase and Citibank Have $2.96 Trillion in Exposure to Credit Default Swaps.

According to the most recent report from the regulator of national banks, the Office of the Comptroller of the Currency (OCC), JPMorgan Chase has exposure to $1.2 trillion in Credit Default Swaps while Citibank has exposure to $1.76 trillion for a combined total of $2.96 trillion as of September 30, 2019.

According to the same report, the total exposure to Credit Default Swaps among all national banks in the U.S. is $3.7 trillion – meaning that just these two banks are responsible for 80 percent of that exposure.

As of this past Friday, JPMorgan Chase had lost 39.3 percent of its common equity capital in the past five weeks while Citigroup, parent of Citibank, had lost 51.7 percent. That left JPMorgan Chase with just $256.68 billion in market cap versus Citigroup’s meager $79.86 billion.

One of our readers emailed us today asking if Credit Default Swaps were still around after they had collapsed Wall Street and the U.S. economy during the 2008 financial crash. Not only are these derivatives of mass destruction still around thanks to lapdog federal regulators and a timid Congress but two of the most dangerous banks in America have not just purchased protection through Credit Default Swaps, but they have sold protection (taken on the risk of a defaulting corporation or credit) to the tune of $1.5 trillion.

Since the repeal of the Glass-Steagall Act in 1999, these giant Wall Street casino investment banks have been allowed to own some of the largest federally-insured banks in America where moms and pops hold their life savings. JPMorgan owns the federally-insured Chase Bank which has more than $1.6 trillion in deposits. Citigroup owns Citibank which holds approximately $1 trillion in deposits.

It’s certainly not that the federal regulators think that these two banks know how to manage risk and thus they can be trusted with Credit Default Swaps. Citigroup was the biggest basket case among all federally-insured banks during the 2008 financial crisis. Citigroup received the largest taxpayer-bailout of any bank in U.S. history as its stock went to 99 cents. Its bailout haul included an infusion of $45 billion in capital from the U.S. Treasury; a government guarantee of over $300 billion on its dubious “assets”; a guarantee of $5.75 billion on its senior unsecured debt and $26 billion on its commercial paper and interbank deposits by the FDIC; and a secret revolving loan facility from the Federal Reserve that sluiced a cumulative $2.5 trillion in below-market-rate loans from 2007 to the middle of 2010. (See chart below from the Government Accountability Office audit.)

JPMorgan Chase, which has retained the same Chairman and CEO, Jamie Dimon, through three guilty pleas to criminal felony counts and is under a new, ongoing criminal probe for turning its precious metals desk into a racketeering enterprise, should have been permanently banned from engaging in derivative trades in 2012. That was when Jamie Dimon allowed a woman with no trading licenses, Ina Drew, to supervise traders in London who gambled with hundreds of billions in depositors’ money and lost at least $6.2 billion making bets on exotic derivatives. It became known as the London Whale scandal. That case was so serious that it was investigated by the FBI and the U.S. Senate’s Permanent Subcommittee on Investigations, which wrote this about the matter:

“The JPMorgan Chase whale trades provide a startling and instructive case history of how synthetic credit derivatives have become a multi-billion dollar source of risk within the U.S. banking system. They also demonstrate how inadequate derivative valuation practices enabled traders to hide substantial losses for months at a time; lax hedging practices obscured whether derivatives were being used to offset risk or take risk; risk limit breaches were routinely disregarded; risk evaluation models were manipulated to downplay risk; inadequate regulatory oversight was too easily dodged or stonewalled; and derivative trading and financial results were misrepresented to investors, regulators, policymakers, and the taxpaying public who, when banks lose big, may be required to finance multi-billion-dollar bailouts.”

With an indictment like that, it is nothing short of a regulatory failure of epic proportions that these Wall Street banks are still endangering the safety and soundness of the U.S. banking system and U.S. economy with their wild derivative exposures.

There is no question at all that derivatives played a central role in the 2008 financial collapse – the worst financial and economic implosion in the United States since the Great Depression of the 1930s. In 2010, Gary Gensler, the Chairman of the Commodity Futures Trading Commission, said this about the role of derivatives in the financial collapse:

“OTC derivatives were at the center of the 2008 financial crisis. They added leverage to the financial system with more risk being backed up by less capital. U.S. taxpayers bailed out AIG with $180 billion when that company’s ineffectively regulated $2 trillion derivatives portfolio, managed from London and cancerously interconnected to other financial institutions, nearly brought down the financial system. As we later learned, much of the bailout money flowed through AIG to U.S. and European banks. These events demonstrate how over-the-counter derivatives – initially developed to help manage and lower risk – can actually concentrate and heighten risk in the economy and to the public.”

This is the chart from the Financial Crisis Commission report that shows that more than half of the $185 billion bailout money given to AIG ended up in the hands of Wall Street banks, foreign global banks, and hedge funds to pay off its derivative bets and securities lending agreements.

“I must say that despite 30 years in housing, finance, and investment — in both the public and private sectors — I had little appreciation of the tremendous leverage, risk, and speculation that was growing in the dark world of derivatives. Neither, apparently, did the captains of finance nor our leaders in Washington.

“The sheer size of the derivatives market is as stunning as its growth. The notional value of over the-counter derivatives grew from $88 trillion in 1999 to $684 trillion in 2008. That’s more than ten times the size of the Gross Domestic Product of all nations. Credit derivatives grew from less than a trillion dollars at the beginning of this decade to a peak of $58 trillion in 2007. These derivatives multiplied throughout our financial markets, unseen and unregulated. As I’ve explored this world, I feel like I have walked into a bank, opened a door, and seen a casino as big as New York, New York. Unlike Claude Rains in Casablanca we should be ‘shocked, shocked’ that gambling is going on.

“As the financial crisis came to a head in the fall of 2008, no one knew what kind of derivative related liabilities the other guys had. Our free markets work when participants have good information. When clarity mattered most, Wall Street and Washington were flying blind…”

Tragically, despite the human suffering of the millions of innocent Americans who lost their jobs and their homes and their life savings in the financial crash of 2007-2010, Washington has allowed the Wall Street casino to be every bit as dangerous today as it was then.

And at a time of national crisis when our federal leaders should be focusing on providing help to families and businesses that are being devastated by the coronavirus, the Federal Reserve is instead engaged in a new, multi-trillion dollar bailout of Wall Street banks, whose crisis began on September 17, 2019 — five months before the first case of coronavirus was diagnosed in the U.S. 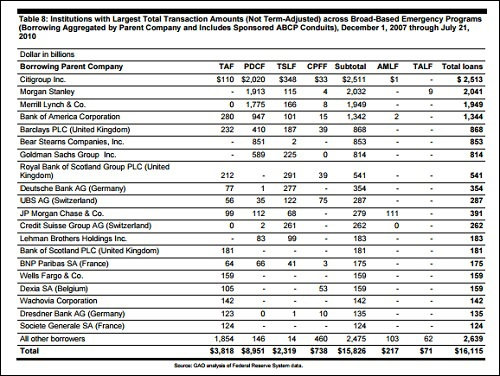