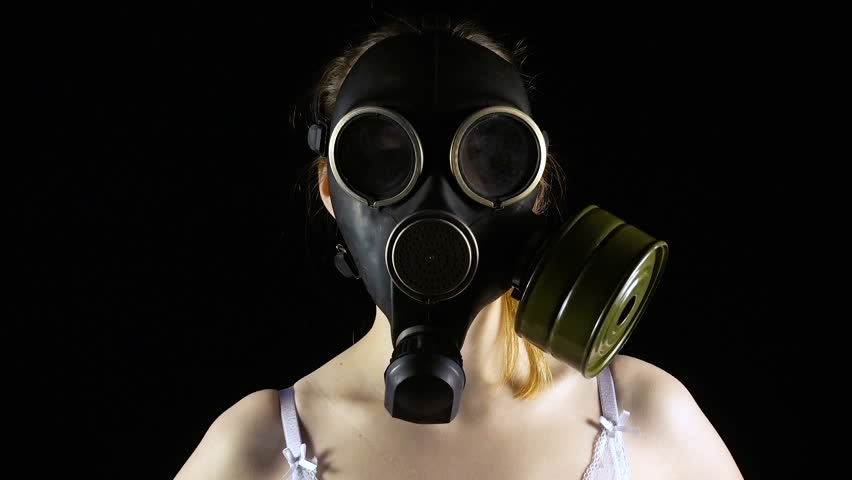 For the second time in a generation, the President and Congress are creating an artificial economy under the guise of ‘saving the economy.’ Through bailouts for the executives of corporations and institutions whose coffers have been emptied for their own personal enrichment, a corporate kleptocracy is having its class power secured. And through token payments and pandemic profiteering for the masses, the American precariat is being deepened and broadened to solidify its place as desperate and expendable.

With Donald Trump’s threat to ‘get America working again’ by Easter (April12th), the same tactic that turned Italy’s pandemic from tragedy to catastrophe is being repeated on a much larger scale here. And for what? In an economy where the richest 1% takes all the gains while the poor and working class haven’t seen a raise in four decades, it is the rich who will reap the benefits while workers get sick and die. It is finance capitalism that is being bailed out when it should have suffocated under its own weight in 2009. 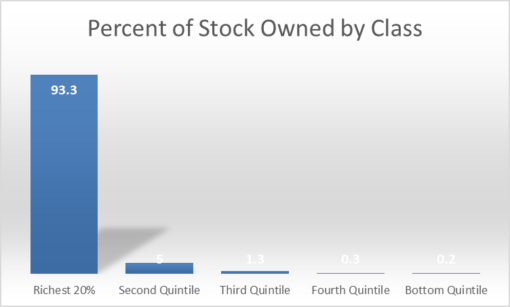 Graph: in times of crisis the powers that be call for solidarity through national unity. However, there is little solidarity shown in who owns the economy. The rich own the economy, represented here in shares of stock. Since the Fall of 2019— long before the coronavirus arrived, the Federal Reserve has been once again bailing out Wall Street to the tune of several trillion dollars (graph below). There aren’t enough virus test kits, ventilators or protective equipment, but at least the rich don’t have to worry about not being rich anymore. Source: Edward Wolff / NBER.

Where are the bailouts for the people? $1,200 checks against $30,000 bills for being treated for coronavirus? Why isn’t providing healthcare for all of the people the primary objective of the bailouts? Mr. Trump says he will send workers back to work while Democrats leave them no alternative but to work or starve. Without providing them the means— assured by meager bailouts, Democrats are every bit as guilty as Donald Trump of sending working people to die in a pandemic to add a few more dollars to the bank accounts of the rich.

More to the point, where are the virus test kits, ventilators and protective equipment for health care workers and the rest of us? Nick Turse of The Intercept puts a lie to the claim that the need for these couldn’t have been foreseen. For decades epidemiologists and health care professionals have been shouting from the rooftops about the need to prepare for a pandemic caused by a respiratory virus. Successive neoliberal governments dismissed the warnings and here we are to suffer the consequences.

When Mr. Trump uttered ‘our country wasn’t built to be shut down,’ one could be forgiven for asking whose country he was talking about and why it can’t be shut down? The country that most of us inhabit has been in the process of being shut down for some four decades through outsourcing, privatization, austerity and cuts to the social safety net. The region I live in was completely shut down in 2008 and stayed closed until just recently. That’s how long it took the last round of bailouts to land here.

Implied in the statement is that we, the people, must comport ourselves with the dictates of ‘the economy’ rather than the other way around. For all of the talk of freedom and democracy, the economy is theorized to exist in a realm where human needs are secondary, a mere matter of opinion. The coronavirus pandemic can’t in any meaningful sense be said to have been chosen. Neither are the marginal existences many of us live. In this way, deference to the economic system is cover for power relations, not a natural order.

One of the truths spoken aloud in a moment of political panic is that the Federal government can create as much money as it cares to and spend it any way that it sees fit. Neel Kashkari, President of the Minneapolis Federal Reserve, reconfirmed this truth. This reframes poverty, student debt, inadequate healthcare, Social Security shortfalls and austerity as political choices, not facts of nature. It also means that the thousands of workers being sent to early deaths from coronavirus could just as easily be saved.

While it’s clear that Donald Trump is a menace, Democrats have yet to reconcile that he is using the same logic— that people must be sacrificed to save ‘the system,’ that motivated Barack Obama’s bailouts of Wall Street. Rich bankers were given unconditional bailouts while nine million mortgage borrowers had their houses taken from them to restore bank profits. The ‘sanctity of contracts’ was cited to give bonuses to bailed out bankers while ‘moral hazard’ was claimed to deny relief to homeowners who were unable to pay their mortgages.

As the Federal government, under the auspices of Donald Trump, Nancy Pelosi and Chuck Schumer, conjures five trillion dollars (Federal stimulus + Federal Reserve) ‘out of thin air’ to bail out financial speculators and the corporate looting class, where was this power when Joe Biden claimed that ‘we’ can’t afford a functioning healthcare system? Where was this power when Nancy Pelosi claimed that this same ‘we’ can’t afford a Green New Deal? The national Democrats’ decades-long austerity program has always been a cynical fraud.

Why this matters is that rank and file Democrats have by-and-large taken the claim that the Federal government must ‘live within its means’ at face value, even as they bore the brunt of austerity policies, as they are about to do again. If hedge funds, private equity and various and sundry financial speculators can be bailed out, then why couldn’t black homeowners have been bailed out in 2010? If corrupt and incompetent corporate executives can be bailed out, then why couldn’t working people whose jobs were outsourced through NAFTA have been bailed out? If Democrats had held the Obama administration to account for the Wall Street bailouts, they would have standing to criticize Donald Trump in the present. But they didn’t. 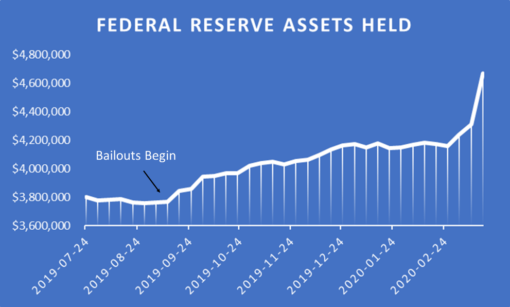 Most readers probably don’t know this, but the Federal Reserve began re-bailing out Wall Street early last Fall, well before the coronavirus hit. Why this matters is that it indicates that nothing was fundamentally fixed through earlier bailouts. Hedge funds of the sort that pay their executives tens of millions of dollars created the market dislocations they claim to be able to exploit. In 2007 these strategies were derided as ‘picking up pennies in front of a steamroller’ for their tendency to earn regular profits until they give them all back plus some when they blow up.

The socially and economically rational solution to these types of blow-ups is to unwind the trades— the bailout, and then shut the hedge funds down and make their managers find honest work in other industries. However, what the Federal Reserve has been doing, following from the Obama administration’s decision to keep insolvent banks on life support in perpetuity, is to manage markets so that losing trades don’t result in loses.

So again, Democrats trying to portray Donald Trump’s lazily articulated homicidal tendencies as a break with the past need to explain why their guy (Obama) used the same class divisions to organize and distribute the 2009 bailouts. Mr. Trump and his fellow oligarchs are exactly who the Obama administration ‘saved’ with its bailouts. Now that Donald Trump is following Mr. Obama’s lead, although in more desperate and politically fraught times, the bi-partisan class war against the rest of us may finally be coming clear.

This gets to the nature and structure of the economy that is being ‘saved.’ The problem in a pandemic is that no one is producing the stuff that money could otherwise buy. Mr. Trump and Congress can wish large amounts of money into existence. But doing so only produces the money, not the stuff to buy. And without the stuff to buy, money is worthless. So it’s fair to say that workers create the wealth that Wall Street exists to redistribute upwards.

But consider this in the context of the current bailouts. Donald Trump, Congress and the Federal Reserve wish trillions of dollars into existence and they decide how it gets allocated. The already rich and connected— financial speculators, corporate executives and other oligarchs, get most of it. This gives them the power to buy the stuff that workers produce. Workers receive enough to not starve for a couple of weeks, and then it’s back to work to die in the pandemic. And here’s the punchline: it has always been like this. Poverty and want are political choices.

Moderate left economists appear to accept that corporations be kept as dominant institutions at the center of American political economy. They recommend giving bailout money to them to be managed, with restrictions, to keep workers ‘attached’ as employees. This, despite that the executives who will still control these companies made them fragile through issuing debt to benefit themselves. Indebtedness has been used as a weapon against labor since the 1980s to claim that corporations can’t afford to pay living wages.

The breadth of the bailouts in 2020 indicates the rising fragility of finance capitalism. The Federal Reserve is reportedly in the process of buying everything— stocks, corporate bonds, mortgage-backed securities, etc. to save the fortunes of the rich, the institutions of finance capitalism and the corporations that have been systematically looted for decades now. The bailouts started well before the coronavirus became known. And unlike in 2008, there is little pretense that these bailouts are about saving a functioning system.

Being made to work during a pandemic (Trump) or face starvation and homelessness (Democrats) leaves working people and the poor with a lot less to lose than they had even a few weeks ago. These circumstances recall the capitalism of the nineteenth century, fitting the pre-Great Depression ideology that currently informs economic logic. Work or die has been ‘disrupted’ to become work and die. The idea that Democrats are going to save anyone but themselves is several crises past delusional. Solidarity is these circumstances means class solidarity. Organize or die is the message being sent from above.