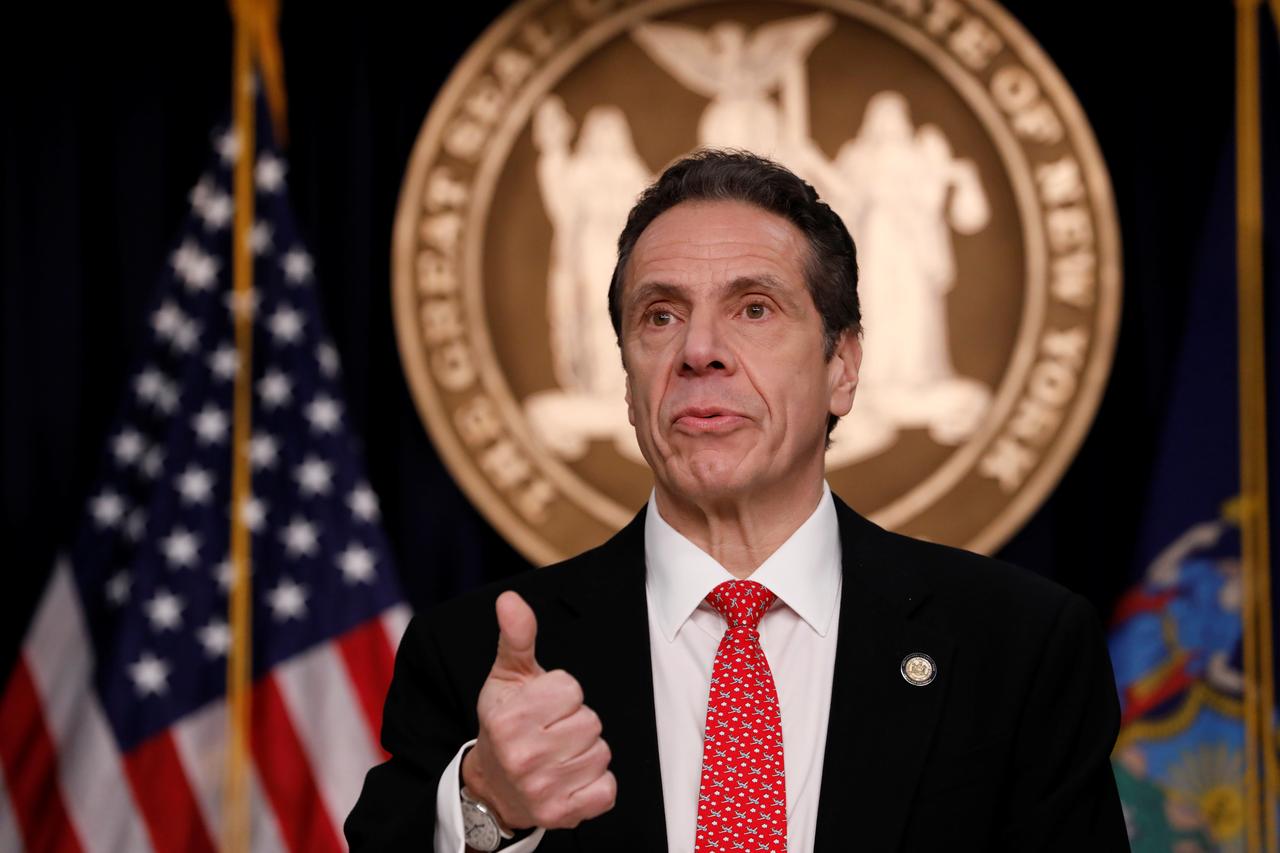 The morning after California laid out the most restrictive measures to combat the virus in the US, NY Gov. Andrew Cuomo on Friday laid out new measures for New York State to combat the coronavirus outbreak, imposing new restrictions like ordering “100% of the workforce” to stay home.

During this time, Cuomo is order all businesses in the state that aren’t deemed “essential” to close, and added that though public transit will remain open for people who need it to travel to their ‘essential’ jobs, and to get to places like hospitals and doctors offices and grocery stores and pharmacies, he urged New Yorkers to only take the trains if absolutely necessary. Cuomo also clarified that bank ATMs are an ‘essential’ service.

All non-essential businesses must close, Cuomo and NYC Mayor de Blasio have said that the state will find better ways to accommodate essential employees who need childcare or other things. But Cuomo threatened to fine businesses and individuals caught breaking the rules.

“These are not helpful hints…they will be enforced. There will be a civil fine and mandatory closure for any business that is not in compliance. Again, your actions can affect my health, that’s where we are. There is a social compact that we have…we must make society safe for everyone,” Cuomo said about the executive action that he’s preparing to sign.

When it comes to exercise, though gyms will be closed, Cuomo said New Yorkers can engage in ‘solitary’ activities like jogging, but said games of pickup basketball and team sports like that won’t be permitted.

During the press conference, Cuomo confirmed that the state had reached the capacity to test 10,000 New Yorkers a day, becoming perhaps the only state in the country to overshoot on its daily testing target of 6k tests. Along with these new ‘dramatic actions’, Cuomo announced more confirmed cases and deaths.

Cuomo told a story about how the city governments of St. Louis and Philadelphia during the Spanish Flu epidemic dramatically impacted the outcomes for their local populations, and that Cuomo was trying to follow the better example, before bringing up the issue of mental health and the fact that his daughter was forced to isolate for 2 weeks.

At any rate, looking at the case curve, the number of cases expected could triple the state’s capacity of beds and ventilators needed to save the lives of the sickest of patients.

The governor, who urged New Yorkers to “blame me” if things go badly with these measures, claiming that this decision was his after careful consideration and consultation with experts. “I did everything we could do…this is about saving lives…if everything we do saves just one life, I’ll be happy,” Cuomo said.

Moving on, Cuomo declared that he was banning evictions during the crisis, building on measures prohibiting banks from engaging in foreclosure, another unprecedented step.

Last week, in the aftermath of the historic oil price collapse, we warned that the long-awaited “fallen angel” day has arrived, as $140 billion in oil producer (and up to $360 if one includes the mid-stream companies) investment grade debt was on the verge of being downgraded to junk and throwing the entire high yield market in turmoil.

Fast forward to today when Bloomberg calculates that since we published out article, the amount of distressed debt – a term that describes borrowings likely to default – in the U.S. alone has doubled to a half-trillion dollars as the collapse of oil prices and the fallout from the coronavirus shutters entire industries.

While rating agencies have been slow to respond to the total collapse in cash flow generation across most US industries as long as the US economy remains paralyzed due to the spreading lock downs across the nation, markets have been far faster, and the result has been a plunge in the price of countless bonds. As a result, corporate bonds – which according to BofA are no longer properly functioning – that yield at least 10% points above Treasuries, as well as loans that trade for less than 80 cents on the dollar, have swelled to $533 billion. This is more than double from the March 6 total of only $214 billion. And, according to UBS, if one adds across all company debt globally, including loans to small- and mid-sized companies that rarely if ever trade, the distressed pile could top $1 trillion. And yes, that number is only going to surge.

An analysis via Trace shows that the amount of distressed bonds has surged to the highest level since the financial crisis, surpassing the oil/manufacturing recession of 2016.

“We could see this be worse than 2008,” said Bloomberg Intelligence analyst Philip Brendel, in what may be the understatement of the day.

While currently most of the distressed debt comes from U.S. shale companies that have been pummeled by the all-out price war between Saudi Arabia and Russia as most companies are now cash flow negative and unable to service their debt obligations, analysts expect this solvency (and liquidity) crisis to spread to all industries the longer the US economy remains in a state of shutdown.

The amount of the oil and gas sector’s distressed debt now stands at over $128 billion, and is expected to rise substantially higher. One of the biggest casualties has been Occidental Petroleum Corp., which has seen its funding costs skyrocket and its credit rating cut to junk; its bonds due in 2024 now yield 18.6% and trade at just 54 cents on the dollar. In early March, they sold for above par. Meanwhile OXY’s CDS trade as if there is a 65% chance the company will go bankrupt in 5 years. 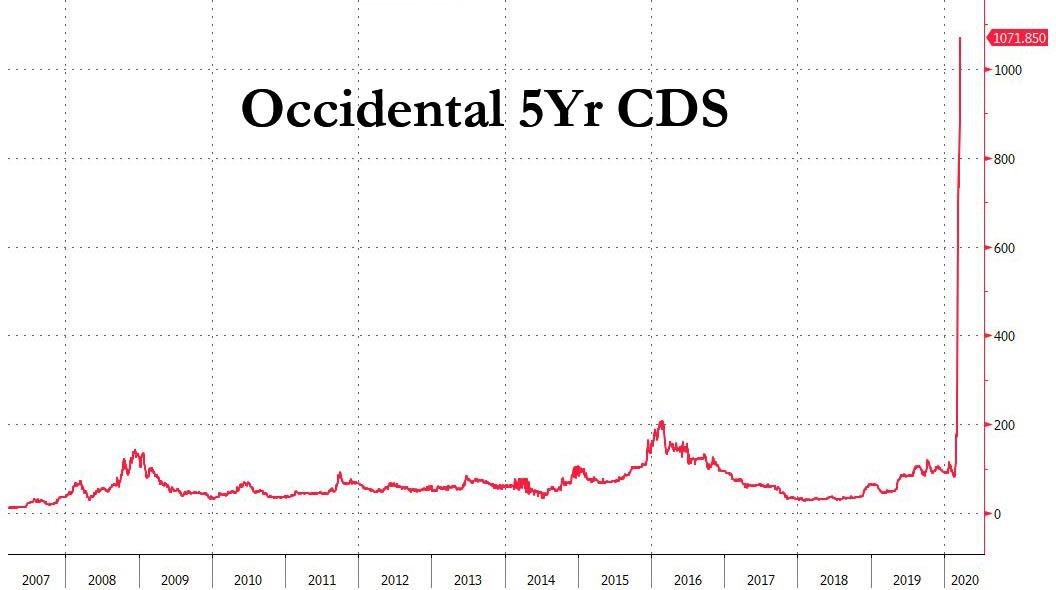 A race had emerged between Goldman and JPMorgan over who can downgrade the US GDP growth rate the most. Up until that point, Goldman held the lead, with its recently announced -5% cut to Q2 GDP. But then JPM’s chief economist  Michael Feroli, admitting he really has no idea what he is doing but deciding to do it nonetheless, announced that he now expects Q2 GDP to crater by an unprecedented -14%, a drop the kinds of which have never before been seen.

But Goldman, which just three months ago said the US economy is “nearly recession-proof” (but apparently not depression proof), and instantly lost all credibility decided that if it can’t impress its clients with its predictive skills, the least it can do is make them laugh by outshining, or rather outdulling, JPM’s forecast and it did just that moments ago when it slashed its previous GDP estimate published less than two weeks ago, and now sees Q2 GDP crashing at a ridiculous -24% rate, and up from -5% just days ago, which means the US is basically entering a second Great Depression.