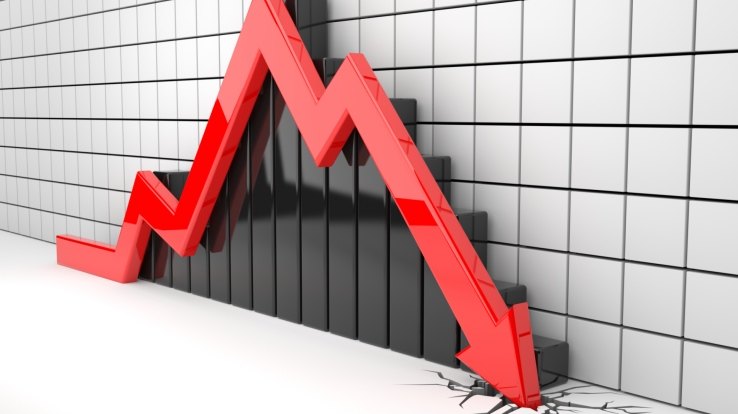 Friday’s market performance has traditionally been the weakest, even during the meltup phase ahead of the recent coronacrash, and as such it will probably not come as a surprise that today’s overnight rout which followed the biggest 6-day correction from a peak for the S&P on record has accelerated only this time without even a casual attempt to buy the dip, with the S&P plunge accelerating, and briefly dipping below 2,800. As shown in the chart below, the S&P is now down over 13% from its Friday high, and the selloff shows no signs of abating as both man and machine is now openly dumping risk as the coronavirus epidemic gets worse by the day.

Futures on American gauges were all down at least 0.8%, a more modest drop than elsewhere in the world, but still suggesting U.S. stocks will retreat for a seventh straight session, cementing the worst week since the global financial crisis. Wall Street shares plunged 4.4% on Thursday alone, the largest fall since the August 2011 US downgrade. Futures pointed to a modest 1% drop later, but the S&P 500 has lost 12% since hitting a record high just nine days ago, putting it in so-called correction territory 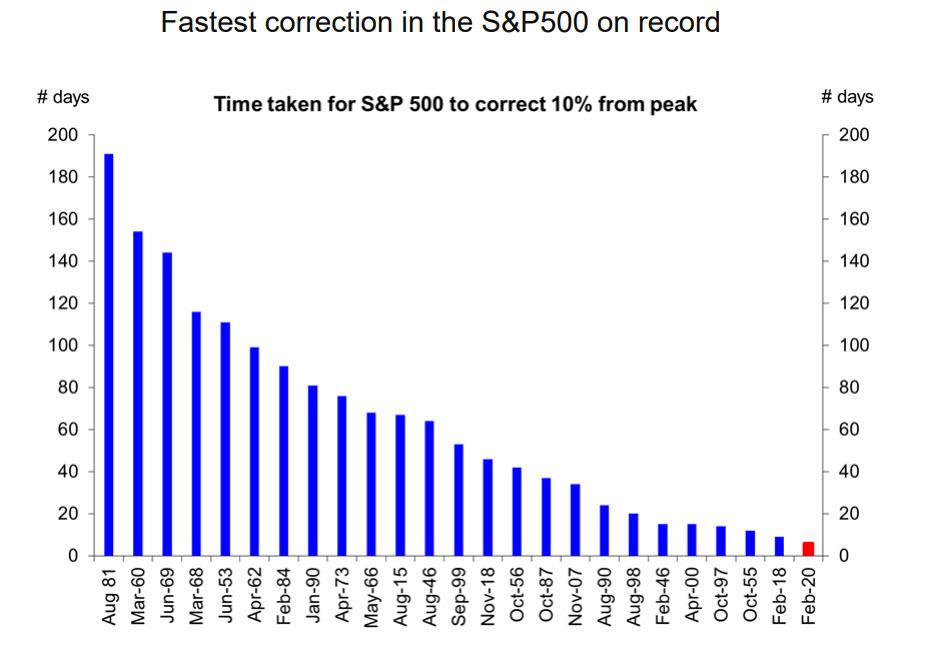 “Investors are trying to price in the worst case scenario and the biggest risk is what happens now in the United States and other major countries outside of Asia,” said SEI Investments Head of Asian Equities John Lau. “These are highly uncertainty times, no one really knows the answer and the markets are really panicking.”

And as the accelerating global coronavirus panic sent world stock markets skidding again on Friday into a angry sea of red compounding their worst crash since the 2008 global financial crisis and pushing the week’s wipeout in value terms to $5 trillion. MSCI’s all country world index, which tracks almost 50 countries, was down more than 1% ahead of U.S. trading and almost 10% for the week – the worst since crash in October 2008.

The VIX exploded, with equity volatility soaring briefly above 47, before stabiling around 41; it was below 15 a week ago, surpassing both the late 2018 selloff, the Feb 2018 Volmageddon, the Aug 2015 ETFlash crash, and the highest since the US downgrade in 2011.

The rout showed no signs of slowing as Europe’s main markets slumped 3-5%, with the Stoxx Europe 600 Index paring a tumble of 4.5%, though it was still headed for the worst weekly performance since 2008. All 19 sectors gauge dropped more than 1.8%. Europe’s airlines and travel stocks have plunged 18% in their worst week since the 2001 9/11 attacks in the United States.

The index, which measures expected swings in U.S. shares in the next 30 days, typically shoots up to around 50 when bear market selling hits its heaviest and approached almost 90 during the 2008-09 financial crisis.

Earlier in the session, Asian benchmarks from Tokyo and Seoul to Shanghai and Sydney posted drops of more than 3% as Asian stocks suffered the steepest one-day decline in 16 months, with the materials and energy sectors falling the most. The MSCI Asia index ex-Japan shed 2.6%. Japan’s Nikkei slumped 3.7% on rising fears the Olympics planned in July-August may be called off due to the coronavirus. All markets in the region were down, with China’s Shanghai Composite dropping 3.7%, as the global rout knocked mainland Chinese shares, which have been relatively well supported this month. The CSI300 index of Shanghai and Shenzhen shares dropped 3.5%, to bring its weekly loss to 5% and the worst since April. Trading volume for MSCI Asia Pacific Index members was 36% above the monthly average for this time of the day.

Hopes that the epidemic that started in China would be over in months and that economic activity would quickly return to normal have been shattered this week as the number of international cases spiralled.

The ongoing dive for safety sent yields on 10Y Treasury bonds to fresh record lows, dropping as low as 1.1550 in frenzied European trading% before staging a modest rebound. It last stood at 1.2143%. That is over 20bps below the three-month bill yield of 1.43%, deepening the inversion of the yield curve, and virtually assuring a recession.

In FX, the dollar traded mixed and the euro continued its advance on the back of short covering; the Swiss franc touched its strongest level against the U.S. currency since September 2018. The pound fell against the euro and money markets priced in a Bank of England interest-rate cut for May on concern the coronavirus could trigger a growth downgrade for the U.K. The kiwi slumped to its weakest since October on increasing expectations for the Reserve Bank of New Zealand to ease monetary policy; New Zealand confirmed its case of coronavirus on Friday, adding to a spate of new infections outside China.

Asian stocks traded lower across the board following the bloodbath on Wall Street which saw the Dow plummet almost 1200 points, S&P break below the 3000 mark and the Nasdaq zero in on the 8500 level. Dow and S&P posted their worst day since February 2018 as the three major indices dipped into correction territory. This performance reverberated into APAC markets as ASX 200 (-3.3%) opened sharply lower and held onto the losses, and again with mining and financials posting heavy losses. Nikkei 225 (-3.6%) fell deeper into correction territory and also saw another day of underperformance in manufacturing, autos and financials, whilst also being weighed on by a firmer JPY.

In commodities, WTI and Brent prices are once again experiencing a significant sell-off this morning with WTI having breached the USD 45/bbl mark and crude well below USD 50/bbl at worst, with losses just shy of USD 2/bbl at present. Focus does, as has been the case all week, remain almost exclusively on the coronavirus with multiple new cases being reported as well as the implementation of emergency or lockdown procedures in some regions. Overnight, prices did briefly see support of reports that Saudi Arabia are looking for a 1mln BPD production cut, and they would be responsible for the majority of such a reduction; while the price support was fleeting, these comments are notable given that such a level would be almost double the figure recommended by the JTC (600k BPD) (Note, similar reports were echoed ahead of the US entrance to market). Next week sees the OPEC meeting where all eyes will be on firstly if production cuts are announced and then, assuming they are announced, the magnitude of reductions; ING posit that 600k would likely be sufficient to maintain market balance at present into Q2 but, in the event that Libyan supply returns earlier than expected cuts of the 1mln magnitude would be required.