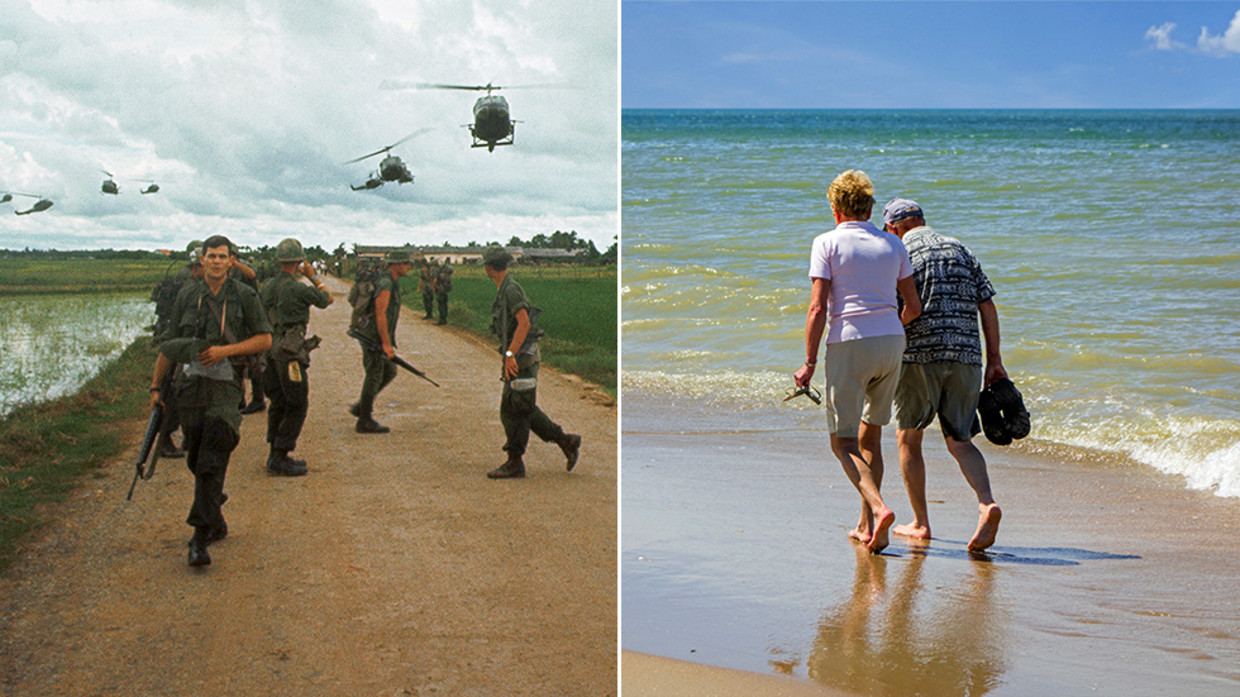 Mother of all ironies – US veterans are returning to Vietnam ‘for a better life’.

It sounds almost unbelievable, but a number of US citizens are deciding to cash out of the elusive ‘American dream’ as they settle down in foreign places, such as Vietnam, where many of them were once loathed as invaders.

Vietnam, Laos, Cambodia. For many Americans, those names invoke powerful memories and images of unspeakable violence, and perhaps the last places on earth to consider visiting. Yet not only are more US veterans and retirees visiting Southeast Asia, an increasing number have decided to call it home. The reason? Many point to affordable healthcare, cheap rent and a rising standard of living.

“Aging American boomers are living a lifestyle reminiscent of Florida, Nevada and Arizona, but in Vietnam,” the Los Angeles Times recently reported. “Monthly expenses here rarely exceed $2,000, even to live in a large unit…including the help of a cook and a cleaner.”

That just might be the mother of all ironies. Retired US soldiers and average American retirees would rather take their chances living abroad among their erstwhile enemies than trying to make ends meet on their pensions back home in the US. That doesn’t say much about the condition of capitalism in America. Indeed, let’s not forget that Vietnam is socialist, which is about as close to a four-letter swear word in the US as you can get. Yet none of that seems to matter to the new arrivals, some of whom were sent to the Asian jungles many years ago to help eradicate the ideological convictions of Washington’s sworn enemy.

Although the Vietnamese government won’t reveal the exact number of American veterans and retirees now living permanently in the country, it is no secret the country has relaxed its visa requirements for many foreign citizens, Americans included. Cambodia, another nation that suffered immensely during the war years, is also proving to be very accommodating to foreigners with pensions to spend.

As way of anecdotal evidence, I reached out to an American acquaintance of mine – I will call him ‘John’ since he requested to remain anonymous – who has been living in Ho Chi Minh City (also known as Saigon) for the last five years with his Vietnamese wife who he met while studying at university. Since relocating to Vietnam, he has noticed a “definite” increase in the number of foreigners, especially among Americans, and all of them seem to have different stories to tell.

“Many of them served in Vietnam and wanted to reconnect to a place that had such an emotional impact on their lives, others are retirees who wanted some adventure and decided to visit this part of the world, never guessing they would end up staying,” he said, while emphasizing that the country surprises many visitors. “Not only are the Vietnamese friendly and accommodating, but food, rent and public services like healthcare are extremely affordable. Plus, you are never far away from beautiful beaches.”

More bang for the buck

For some US veterans and retirees, those factors are proving irresistible as they are coming around to the grim conclusion that their monthly pensions and Social Security benefits barely cover the necessities. Unless they were able to scrimp and save during their working or warring years – and statistics indicate the majority could not – then they may be in for a surprise.

Although Donald Trump recently introduced legislation that extends medical coverage to more US veterans, the plan is already straining under the pressure to accommodate everyone who qualifies. That’s bad news for millions of veterans, many of whom desperately need physical and mental treatment. To underscore their problems, an estimated 17 veterans are committing suicide every single day.

In fact, the total number of suicides among veterans has increased four of the last five years on record, according to the Military Times. Veterans are 1.5 times more likely to commit suicide than Americans who never served in the military. For female veterans, the likelihood of suicide is 2.2 times greater.

Would moving to a more affordable place – like Southeast Asia – ease their tensions? It seems that an increasing number of US veterans and retirees are willing to take the risk and find out, despite the painful legacy of the Vietnam War, which deeply scarred Americans and Vietnamese alike.

Between March 1965 and May 1975, over 50,000 US soldiers (and many times more on the opposing side among civilians and soldiers) lost their lives as part of Washington’s bungling effort to stop the spread of communism in Southeast Asia.

According to Vietnam’s official statistics, up to 2 million civilians lost their lives on both sides of the protracted conflict.

Today, many Americans must be asking themselves a simple question: was all that death and destruction on both sides of the war really worth it? Even for those who survived the protracted war, they received no hero’s welcome back home. In fact, they were largely shunned by society. Meanwhile, thousands of these veterans still suffer the physical and psychological effects of combat, yet cannot receive the minimal amount of medical care. Now, the former killing fields not only look more attractive, they have become home for many.

Will future generations of Americans learn the lesson of this terrible tragedy? If history teaches Americans anything, it is that it will always be repeated.