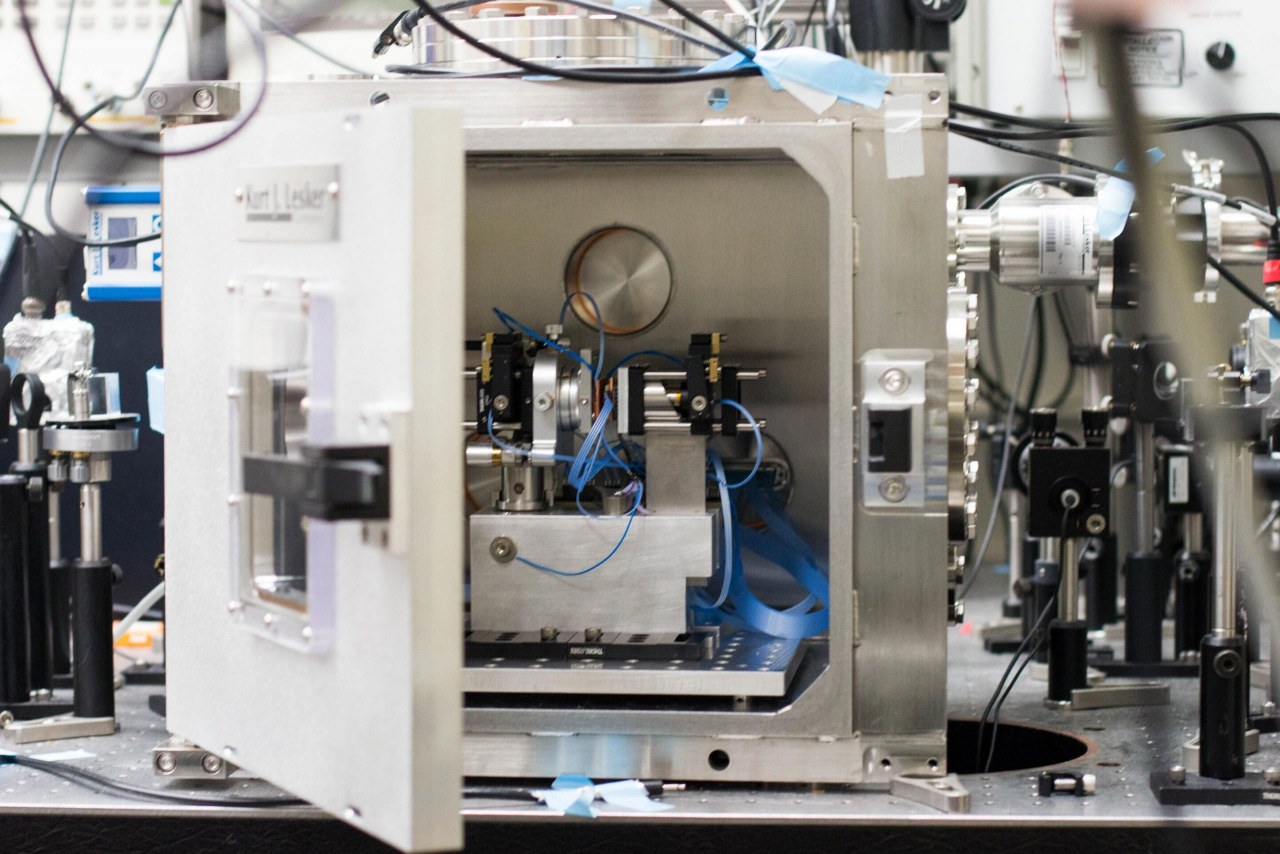 In a surprising new study, University of California, Berkeley, researchers show that heat energy can travel through a complete vacuum thanks to invisible quantum fluctuations. To conduct the challenging experiment, the team engineered extremely thin silicon nitride membranes, which they fabricated in a dust-free clean room, and then used optic and electronic components to precisely control and monitor the temperature of the membranes when they were locked inside a vacuum chamber.

Heat Energy Leaps Through Empty Space, Thanks to Quantum Fluctuations

If you use a vacuum-insulated thermos to help keep your coffee hot, you may know it’s a good insulator because heat energy has a hard time moving through empty space. Vibrations of atoms or molecules, which carry thermal energy, simply can’t travel if there are no atoms or molecules around.

But a new study by researchers at the University of California, Berkeley, shows how the weirdness of quantum mechanics can turn even this basic tenet of classical physics on its head.

The study, published on December 11, 2019, in the journal Nature, shows that heat energy can leap across a few hundred nanometers of a vacuum, thanks to a quantum mechanical phenomenon called the Casimir interaction.

Though this interaction is only significant on very short length scales, it could have profound implications for the design of computer chips and other nanoscale electronic components where heat dissipation is key. It also upends what many of us learned about heat transfer in high school physics. 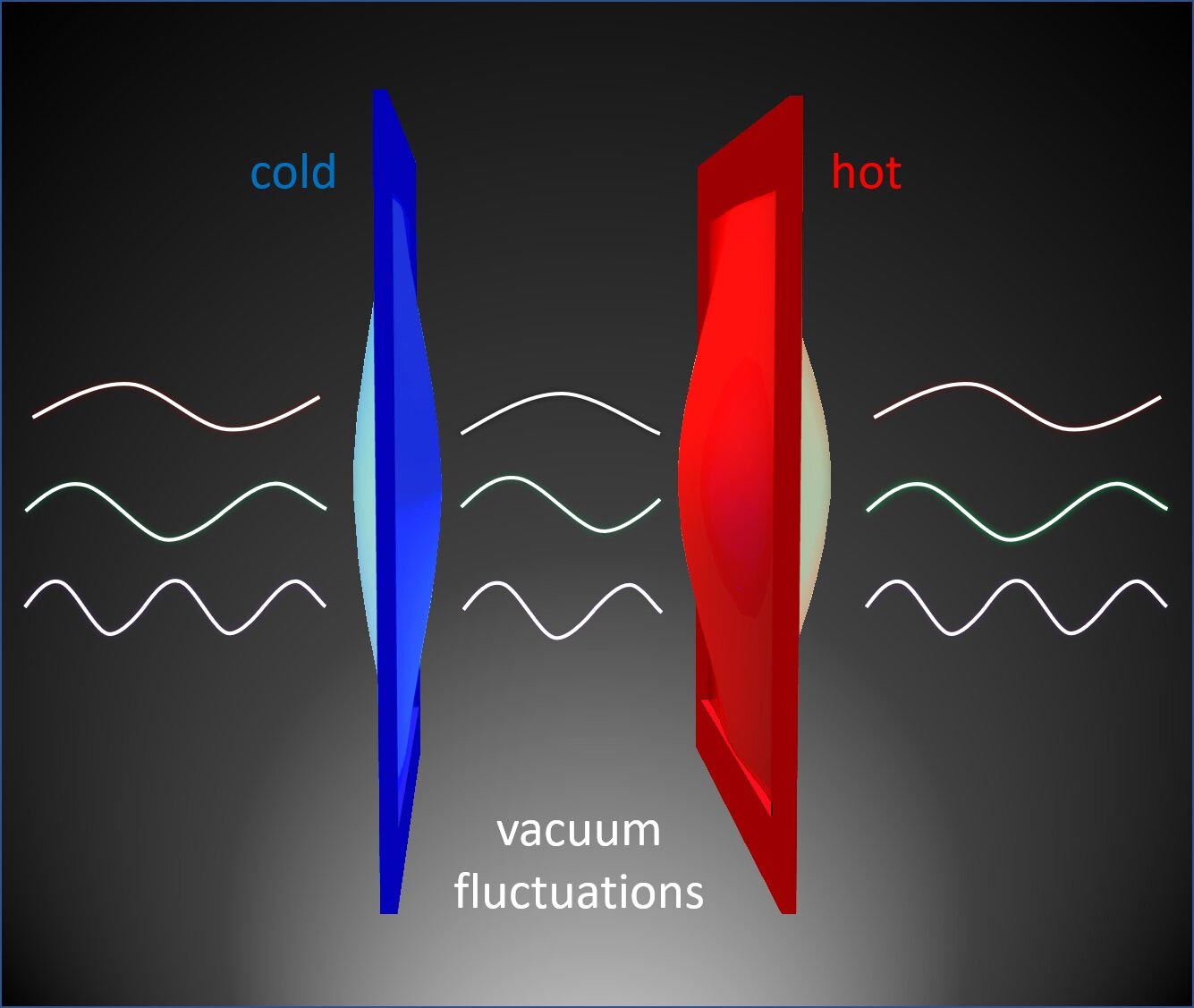 In the experiment, the team showed that heat energy, in the form of molecular vibrations, can flow from a hot membrane to a cold membrane even in a complete vacuum. This is possible because everything in the universe is connected by invisible quantum fluctuations.

“Heat is usually conducted in a solid through the vibrations of atoms or molecules, or so-called phonons — but in a vacuum, there is no physical medium. So, for many years, textbooks told us that phonons cannot travel through a vacuum,” said Xiang Zhang, the professor of mechanical engineering at UC Berkeley who guided the study. “What we discovered, surprisingly, is that phonons can indeed be transferred across a vacuum by invisible quantum fluctuations.”

In the experiment, Zhang’s team placed two gold-coated silicon nitride membranes a few hundred nanometers apart inside a vacuum chamber. When they heated up one of the membranes, the other warmed up, too — even though there was nothing connecting the two membranes and negligible light energy passing between them.

“This discovery of a new mechanism of heat transfer opens up unprecedented opportunities for thermal management at the nanoscale, which is important for high-speed computation and data storage,” said Hao-Kun Li, a former Ph.D. student in Zhang’s group and co-first author of the study. “Now, we can engineer the quantum vacuum to extract heat in integrated circuits.”

No such thing as empty space

The seemingly impossible feat of moving molecular vibrations across a vacuum can be accomplished because, according to quantum mechanics, there is no such thing as truly empty space, said King Yan Fong, a former postdoctoral scholar at UC Berkeley and the study’s other first author.

“Even if you have empty space — no matter, no light — quantum mechanics says it cannot be truly empty. There are still some quantum field fluctuations in a vacuum,” Fong said. “These fluctuations give rise to a force that connects two objects, which is called the Casimir interaction. So, when one object heats up and starts shaking and oscillating, that motion can actually be transmitted to the other object across the vacuum because of these quantum fluctuations.”

Though theorists have long speculated that the Casimir interaction could help molecular vibrations travel through empty space, proving it experimentally has been a major challenge. To do so, the team engineered extremely thin silicon nitride membranes, which they fabricated in a dust-free clean room, and then devised a way to precisely control and monitor their temperature.

They found that, by carefully selecting the size and design of the membranes, they could transfer the heat energy over a few hundred nanometers of a vacuum. This distance was far enough that other possible modes of heat transfer were negligible — such as energy carried by electromagnetic radiation, which is how energy from the sun heats up Earth.

Because molecular vibrations are also the basis of the sounds that we hear, this discovery hints that sounds can also travel through a vacuum, Zhang said.

“Twenty-five years ago, during my Ph.D. qualifying exam at Berkeley, one professor asked me ‘Why can you hear my voice across this table?’ I answered that, ‘It is because your sound travels by vibrating molecules in the air.’ He further asked, ‘What if we suck all air molecules out of this room? Can you still hear me?’ I said, ‘No, because there is no medium to vibrate,’” Zhang said. “Today, what we discovered is a surprising new mode of heat conduction across a vacuum without a medium, which is achieved by the intriguing quantum vacuum fluctuations. So, I was wrong in my 1994 exam. Now, you can shout through a vacuum.”

Co-authors of the paper include Rongkuo Zhao, Sui Yang and Yuan Wang of UC Berkeley.

This research was funded in part by the National Science Foundation (NSF) under grant 1725335, the King Abdullah University of Science and Technology Office of Sponsored Research (OSR) (award OSR-2016-CRG5-2950-03; OSR-2016-CRG5-2996) and the Ernest S. Kuh Endowed Chair in Engineering.