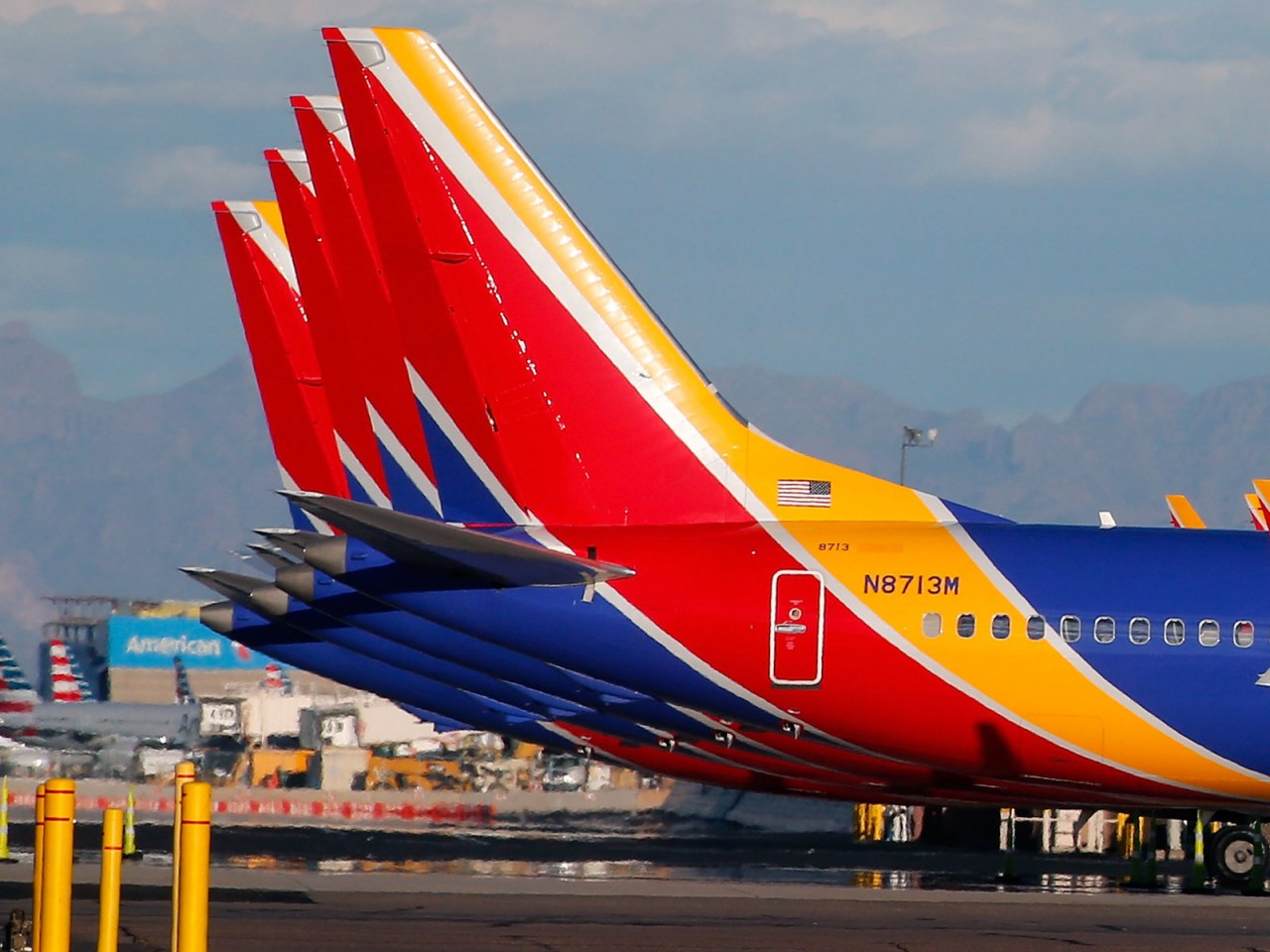 With the storm clouds over the grounded 737 MAX gathering patiently for the past 5 months, it was only a matter of time before the torrential downpour arrived, which it did just before 730am, when Boeing reported shocking numbers, with Q2 EPS printing at a stunning loss of $5.82, far below the expected profit of $1.98 per share and last year’s profit of $3.33 with revenue plunging 35% Y/Y to $15.75BN, some $5 billion below the expected $20.45 billion. 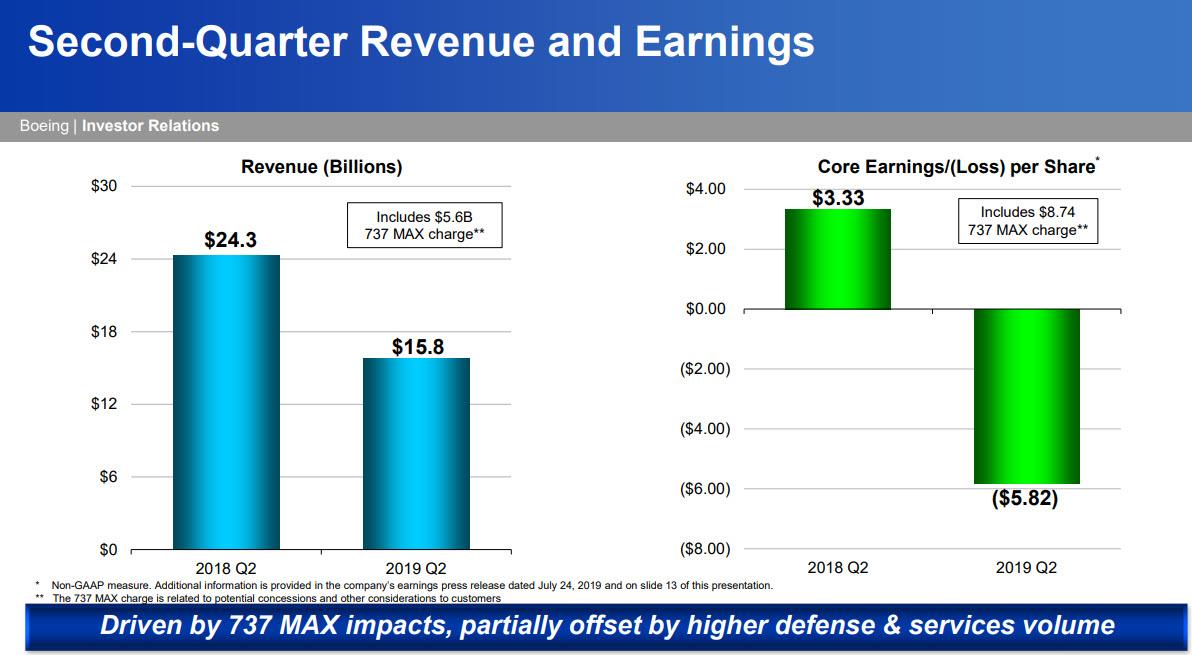 The Max grounding wiped out profit margins for Boeing’s juggernaut commercial airplane division, which typically accounts for about two-thirds of sales. Revenue plunged 66% to $4.72 billion – slightly more than Boeing’s new global services division. The operating margin was -104.7% vs 12.8% a year earlier according to Bloomberg.

The company listed the following reasons for this surprising loss:

The 737 MAX fiasco meant that Boeing actually tipped into cash flow negative, reporting $600 million in operating cash burn and a total of $1 billion in negative cash flow, a far cry from the $4.68BN a year ago, while the company’s backlog dropped 2.9% to $474 billion.

Commenting on the ongoing 737 MAX troubles, Boeing said that “disciplined development and testing is underway and we will submit the final software package to the FAA once we have satisfied all of their certification requirements.” Boeing also remains “focused on 737 MAX safe return to service; results significantly impacted.”

For now, and until there is clarity on the future of the 737 MAX, Boeing pulled all forecasts, saying that the previously issued 2019 financial guidance does not reflect 737 MAX impacts, and that due to uncertainty of timing and conditions on 737 MAX return to service, new guidance will be issued at future date. This is what the company said:

“Due to the uncertainty of the timing and conditions surrounding return to service of the 737 MAX fleet, new guidance will be issued at a future date. Boeing is working very closely with the FAA on the process they have laid out to certify the 737 MAX software update and safely return the MAX to service. Disciplined development and testing is underway and we will submit the final software package to the FAA once we have satisfied all of their certification requirements. Regulatory authorities will determine the process for certifying the MAX software and training updates as well as the timing for lifting the grounding order.”

That’s not all. Hidden deep in the release was more bad news: as Bloomberg first noted, the first flight for the Boeing 777X jetliner was pushed into early 2020. “That’s somewhere between six months to a year behind schedule as Boeing waits for GE to redesign a key component for the aircraft’s hulking engines. Boeing is still targeting the initial delivery of the plane for late 2020, but says there’s “significant risk to this schedule given engine challenges.”

With the 737 Max grounded, airlines around the world have had to cut flights and rearrange schedules. American Airlines said earlier this month that it canceled 7,800 flights during the second quarter of this year because the planes couldn’t fly, while European budget carrier Ryanair has had to delay expansion plans and expects to fly 5 million fewer passengers next year.

“We are at the mercy of Boeing and the regulators,” Ryanair CEO Michael O’Leary said in a conference call with analysts this month.

Boeing says it might have to shut down 737 Max production

Boeing has continued to build the 737 Max, its bestselling jet, although at a slower pace. The plane has been grounded since mid-March because of two fatal crashes that killed more than 300 people.

Boeing hopes to get approval for the plane to fly again sometime early in the fourth quarter. Muilenburg said any further delays in approval to fly the 737 Max again could jeopardize its production. A further slowdown or temporary shutdown of 737 Max production is “not something we want to do, but an alternative that we have to prepare for,” Muilenburg told investors on a conference call. He said the company needs to prepare for that “to make sure we’ve covered all scenarios.”

It is unclear when the 737 Max will be allowed to return to service. Boeing is working on a software fix to a safety system which is believed to have caused the two crashes. But it says it won’t be able to present that fix to aviation authorities until September at the earliest, and it hopes to have a certification flight in October.

After the certification flight, Muilenburg said Wednesday he believes regulators will approve the 737 Max for flight in a matter of weeks. So it’s possible the plane won’t be cleared to fly again until at least late this year.

Boeing executives would not say when it will decide to slow or halt production if its timeline to return to service is not met. Boeing said the uncertainty about the return to service means it still can’t give guidance on future results.

Because of the grounding, Boeing reported its largest loss ever — a $3.7 billion adjusted loss in the second quarter. The company said any slowdown or halt in production could lead to even more losses. The slower pace of 737 Max production has already increased Boeing’s production costs by about $1.7 billion.

The company had already warned investors that it would take a $5 billion profit hit from its inability to deliver the 737 Max to its customers.

Boeing’s $3.7 billion adjusted loss compares to a $2.4 billion profit Boeing earned last year. Boeing’s results did not include a cost of litigation related to the two crashes. The company announced it will set up a fund to distribute $100 million to the families of victims. But it also said it took a $201 million hit to profit last quarter primarily for a litigation reserve.

The company was helped by better results from its defense and services business. Earnings from defense, space and security business more than doubled, increasing $600 million. Its commercial aircraft unit reported a $4.9 billion loss as revenue plunged by $9.2 billion.

In addition to the 737 Max issues, the company also warned Wednesday that it may not be able to deliver its newest aircraft, the 777X, by the end of next year, as it had hoped. Previously disclosed problems with the jet’s General Electric (GE) engine means that target for the first delivery is at “significant risk.”

Boeing also burned through about $1 billion in cash in the quarter. But Boeing said it had nearly $10 billion in cash and securities on hand to help it weather continued losses. It was able to issue new debt during the quarter to help increase its cash reserves.

Boeing said it will take several quarters for Boeing to deliver all its undelivered 737 Max planes once it receives approval for the plane to fly again. Because Boeing gets most of the money from its customers at the time of delivery, that new guidance suggests that Boeing will face reduced revenue well into 2020, even the best case scenario for getting the plane back in the air late this year.

New orders for other commercial aircraft have also fallen sharply during the crisis.