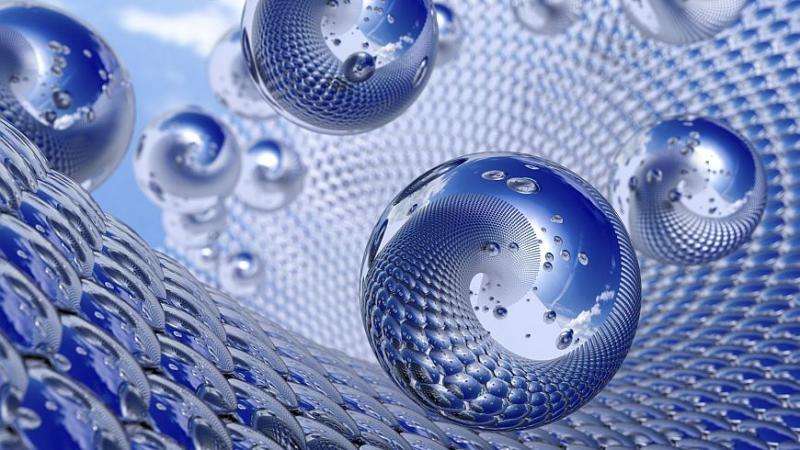 It’s not an electron. But it sure does act like one.

Northwestern University researchers have made a strange and startling discovery that nanoparticles engineered with DNA in colloidal crystals — when extremely small — behave just like electrons. Not only has this finding upended the current, accepted notion of matter, it also opens the door for new possibilities in materials design.

“We have never seen anything like this before,” said Northwestern’s Monica Olvera de la Cruz, who made the initial observation through computational work. “In our simulations, the particles look just like orbiting electrons.”

With this discovery, the researchers introduced a new term called “metallicity,” which refers to the mobility of electrons in a metal. In colloidal crystals, tiny nanoparticles roam similarly to electrons and act as a glue that holds the material together.

“This is going to get people to think about matter in a new way,” said Northwestern’s Chad Mirkin, who led the experimental work. “It’s going to lead to all sorts of materials that have potentially spectacular properties that have never been observed before. Properties that could lead to a variety of new technologies in the fields of optics, electronics and even catalysis.”

The paper will publish Friday, June 21 in the Science Journal.

Mirkin’s group previously invented the chemistry for engineering colloidal crystals with DNA, which has forged new possibilities for materials design. In these structures, DNA strands act as a sort of smart glue to link together nanoparticles in a lattice pattern.

“Over the past two decades, we have figured out how to make all sorts of crystalline structures where the DNA effectively takes the particles and places them exactly where they are supposed to go in a lattice,” said Mirkin, founding director of the International Institute for Nanotechnology.

In these previous studies, the particles’ diameters are on the tens of nanometers length scale. Particles in these structures are static, fixed in place by DNA. In the current study, however, Mirkin and Olvera de la Cruz shrunk the particles down to 1.4 nanometers in diameter in computational simulations. This is where the magic happened.

“The bigger particles have hundreds of DNA strands linking them together,” said Olvera de la Cruz. “The small ones only have four to eight linkers. When those links break, the particles roll and migrate through the lattice holding together the crystal of bigger particles.”

When Mirkin’s team performed the experiments to image the small particles, they found that Olvera de la Cruz’s team’s computational observations proved true. Because this behavior is reminiscent to how electrons behave in metals, the researchers call it “metallicity.”

Olvera de la Cruz and Mirkin next plan to explore how to exploit these electron-like particles in order to design new materials with useful properties. Although their research used gold nanoparticles, Olvera de la Cruz said “metallicity” applies to other classes of particles in colloidal crystals.

“In science, it’s really rare to discover a new property, but that’s what happened here,” Mirkin said. “It challenges the whole way we think about building matter. It’s a foundational piece of work that will have a lasting impact.”

The research, “Particle analogs of electrons in colloidal crystals,” was supported by the Center for Bio-Inspired Science, an Energy Frontier Research Center funded by the U.S. Department of Energy (award number DE-SC0000989); the Air Force Office of Scientific Research (award number FA9550-17-1-0348); the Office of Naval Research (award number 00014-15-1-0043) and the Sherman Fairchild Foundation. Martin Girard, a PhD graduate from Olvera de la Cruz’s laboratory and current postdoctoral scholar at the Max Planck Institute for Polymer Research in Germany, is the paper’s first author. 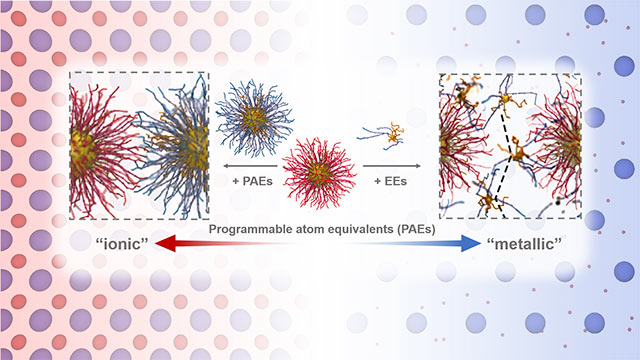