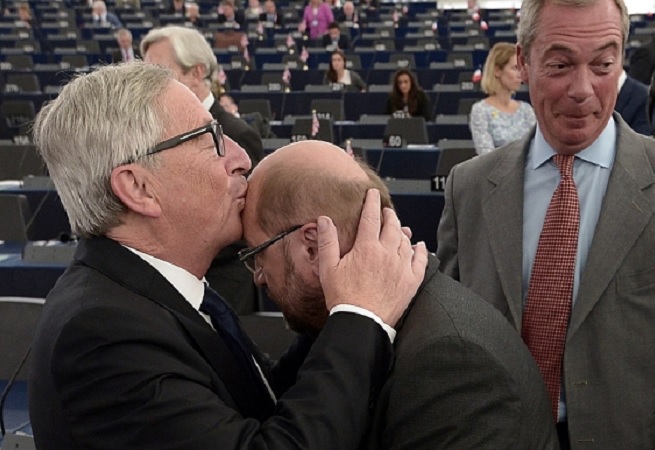 It’s a some degree of moral disgrace when the EU Parliament, which lectures the world on the need to respect the rule of law, uses legal language to tell lies about the legality of the situation in Venezuela, and to destroy that legality.

Indeed, Brussels’ vote in favour of recognition is even more absurd than recognising Marine Le Pen because, unlike her, Juan Guaido has never been a candidate in his country’s presidential election, let alone been elected to it, and until a few weeks ago no one, not even in Venezuela, had even heard of him.

The resolution voted by the European Parliament is actually worse than President Trump’s “recognition” of Guaido on January 23. Four political groups in the European Parliament, acting independently of one another before later agreeing on a common resolution, sat down to formulate their texts, in legal language, which state that Juan Guaido is the legitimate president “according to Article 233 of the Venezuelan constitution.”

That they did this, and that the common resolution was then voted by all but 100 or so MEPs, is a frightening illustration of power of groupthink. Or perhaps it is just dishonesty. No one who has ever read Article 233 of the Venezuelan constitution could possibly conclude that it says anything of the kind.

On the contrary, Article 233 is precisely what Juan Guaido violated when he performed his little stunt of proclaiming himself president in a public square in Caracas on January 23.

Most countries’ constitutions have articles like Article 233 of the Constitution of the Bolivarian Republic of Venezuela. It deals with what happens if the president of the Republic does not, or cannot, fulfil his duties.

It lists six circumstances in which his term can be cut short: if he dies; if he resigns; if he is removed from office by a ruling of the country’s supreme court; if he is proclaimed physically or mentally unfit after a formal medical procedure validated by the National Assembly and by the supreme court; if he abandons his office; or if he is impeached by a popular referendum.

Not a single one of these conditions has been fulfilled: President Maduro has not resigned; he is not dead or unfit; he has not been impeached by the courts or by the people. Worse, Article 233 goes on to say who takes power if the presidency falls vacant – which it has not – and, guess what? It specifies that it is the vice-president who takes over, in this case Mrs Delcy Rodriguez, not the president of the National Assembly (Guaido).