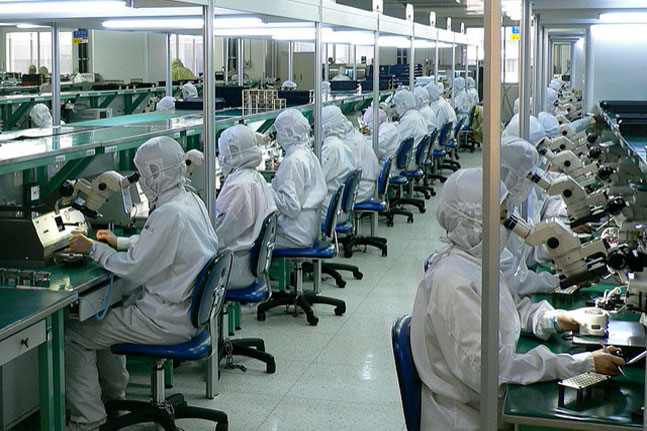 In the latest indication that the slump in sales of Apple’s most recent batch of iPhones isn’t a transitory trend, Nikkei Asia Review on Friday reported that Foxconn, one of Apple’s biggest and most important iPhone suppliers, is cutting seasonal staff more swiftly than in previous years, a sign that it is bracing for weak sales in the months ahead as the industry suffers its worst downturn in 10 years.

Normally, the 50,000 contract workers who have been let go at Foxconn’s most important factory in Zhengzhou would have been kept around for a few more months, as the manufacturer gradually reduced its employee head count.

The report comes after Apple announced plans to cut iPhone production for the second time in two months.

Around 50,000 contract workers have been let go since October at Foxconn Technology Group’s most important iPhone factory at Zhengzhou, in China’s Henan Province, according to an industry source familiar with the situation. Normally, the contracts of these workers would be renewed every month from August until mid- to late January, when the workforce is traditionally scaled back for the slow iPhone production season.

The depth of the cuts isn’t deeper than in previous years, it’s just happening much earlier than expected, as many workers were asked to leave before year-end as expectations for holiday sales slumped.

The scale of the cuts is not necessarily deeper than previous years, it is simply significantly earlier, industry sources said. “It’s quite different this year to ask assembly line workers to leave before the year-end,” a source with knowledge of Foxconn’s reductions said.

Other important iPhone suppliers have let workers go much earlier than usual as they struggle with slower-than-expected demand for Apple’s iconic product. The California tech giant earlier this month shocked the market by warning of a slump in revenues at the end of 2018. This year is also shaping up to be difficult, with further declines expected in the smartphone market, while the ongoing U.S.-China trade war is taking a heavy toll.

Foxconn isn’t alone in its cutbacks: Other companies further down the supply chain are also cutting jobs.

Pegatron, Apple’s second-biggest iPhone assembler, began canceling monthly labor contracts in November. A source close to the company said its normal practice was to reduce the 200,000-strong head count by tens of thousands every month until reaching about 100,000 – the minimum required for daily operation, according to one source familiar with the situation. “And for [2018], it just happened sooner than in the past because of poor demand.”

Industry sources said early cutbacks were happening further down the supply chain as well. One key component supplier based in Shenzhen had asked 4,000 workers to take an extended “vacation” from October to March, a person with knowledge of the situation said. “The company has not actively laid off those workers yet. It will decide whether or not to lay them off after March 1,” the source said.

To be sure, Foxconn’s cutbacks stretch beyond its iPhone manufacturing units. It is also paring back the number of managers and consolidating business units as it aims to cut 100,000 permanent positions.

Meanwhile, Foxconn – formally Hon Hai Precision Industry – is in the middle of an aggressive cost-cutting program as it braces for a difficult 2019. In addition to letting contract workers go early, it is hoping to reduce expenses with an organizational restructuring, according to people close to the Taiwanese company. It has recently merged business units making Apple’s MacBooks and iPads with another division making laptops and desktops for Dell and Acer.