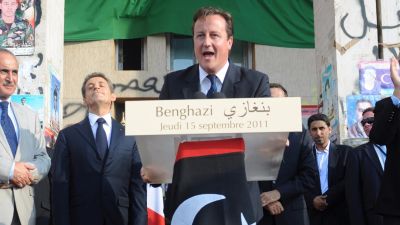 Britain’s military knew that fighters from an Al Qaeda-linked terrorist organization were benefiting from the overthrow of Colonel Muammar Gaddafi in 2011, but continued to support illegal NATO airstrikes in Libya for another two months.

The revelation raises serious questions about British foreign policy and whether the U.K.’s then Prime Minister David Cameron misled Parliament. In early September 2011, Cameron updated the House of Commons about the situation in Libya, telling MPs:

“This revolution was not about extreme Islamism; Al-Qaeda played no part in it.”

However, the Ministry of Defence (MOD) had assessed the month before that: “The 17 February Brigade is likely to be an enduring player in [the] transition” away from Gaddafi’s regime and had “political linkages” to Libya’s rebel leadership, the National Transitional Council.

The 17 February Brigade, also known as the 17 February Martyrs Brigade, was a hardline Islamist militia named after the date the uprising began against Gaddafi. Its ranks included Salman Abedi, who went on to murder 22 innocent people in the Manchester Arena terrorist attack in 2017.

The MOD assessment said, “Many 17th February Brigade fighters have affiliations with the Muslim Brotherhood and other Islamist groups, such as the Libyan Islamic Movement for Change (formerly LIFG).”

The LIFG, or Libyan Islamic Fighting Group, was banned by Britain in 2005 as a terrorist organization over its links to Al Qaeda. Its supporters included the Manchester bomber’s father, Ramadan Abedi. The organization rebranded to the Libyan Islamic Movement for Change during the 2011 war.

Although the LIFG’s leadership renounced ties to Al Qaeda as part of a prisoner release deal it made with Gaddafi shortly before the 2011 uprising, many of its members continued to hold violent Islamist views. It was not until 2019 that the ban was lifted on the LIFG in the U.K.

The MOD has only released a portion of its assessment to Declassified following a freedom of information request. It is not clear whether the intelligence was shared at the time with ministers.

Dr. Liam Fox, who was defence secretary during the war, told Parliament’s Foreign Affairs Committee in 2016: ‘I do not recall reading any reports that set out the background of any Islamist activity to specific rebel groups.’

Fox was responding to a question from the committee about whether he was aware that members of the LIFG were participating in the rebellion.

Lord William Hague, who was foreign secretary, told the committee: “Libyan leaders themselves did not have a deeper understanding of what was happening in their own country” and so “it is probably wrong to expect somebody sitting in the backrooms of the Foreign Office or Vauxhall Cross [MI6 headquarters] to know better than they did.”

General Sir David Richards, Britain’s top military officer during the intervention, said Whitehall’s knowledge about the extent of LIFG involvement in the rebellion “was a grey area.” He told the committee “in a perfect world, we would have known it all” and that “we were suspicious and beginning to build up our understanding during the campaign.”

Richards had argued internally for pauses during the bombing campaign to allow for negotiations, but Cameron overruled him. The former defence chief told Declassified he was concerned that this particular assessment was not shown to him at the time.

“Given my well-known hostility to regime change in Libya, I am certain that my outer office staff would have brought this to my attention if they had seen it,” Richards commented.

“I suspect it remained within Defence Intelligence as one of many sometimes contradictory reports. The report’s importance was also probably not properly understood at the time.”

Defence Intelligence is a branch of the MOD that gathers and analyses information relevant to conflicts.

Ian Martin, the U.N.’s top official in Libya at the time, has said British attack helicopters were “pivotal… in supporting the final assault on Tripoli,” and that U.K. special forces accompanied and advised a rebel commander throughout the advance.

Although NATO’s U.N. mandate allowed it only establish No-Fly-Zone and to protect civilians, the alliance continued attacking Gaddafi’s forces until the end of October 2011, two months after the fall of Tripoli. Gaddafi was lynched by rebels in his hometown of Sirte on Oct. 20. By destroying Libyan government forces, rather than seek a ceasefire and negotiated settlement, as the African Union proposed, NATO helped create a power vacuum in the country.

Elections were held in 2012, at which Islamists failed to win a majority and instead used their militias to maintain political influence. Libya then descended into a failed state, as rival militias vied for control.

The chaos created a safe haven for international terrorism, with Al Qaeda’s Libyan branch Ansar al Sharia and the so-called Islamic State group setting up camps in the country.

Among those fighting with Ansar al Sharia in 2011-12 was Khairi Saadallah, a child soldier who several years later went on to murder three men in a park in Reading. Attacks on Western tourists in Tunisia in 2015, that killed 60 people, were also linked to a terrorist base in Libya.

More than a decade after NATO’s illegal intervention, Libya is split between rival governments and run by militias. A recent survey by The Economist found that Tripoli was one of the worst capital cities in the world to live in.

“Throughout 2011, the U.K. government was responding to a rapidly changing and volatile situation in Libya and sought to make timely decisions to protect Libyan civilians and U.K. national security. All U.K. military action was taken in accordance with the United Nations mandate to protect civilians.”

“Assessments of the different actors in Libya in 2011 were produced as standard by the MoD. These were routinely made available to ministers and senior officials.”

David Cameron, Liam Fox, William Hague and former Home Secretary Theresa May did not respond to requests for comment.