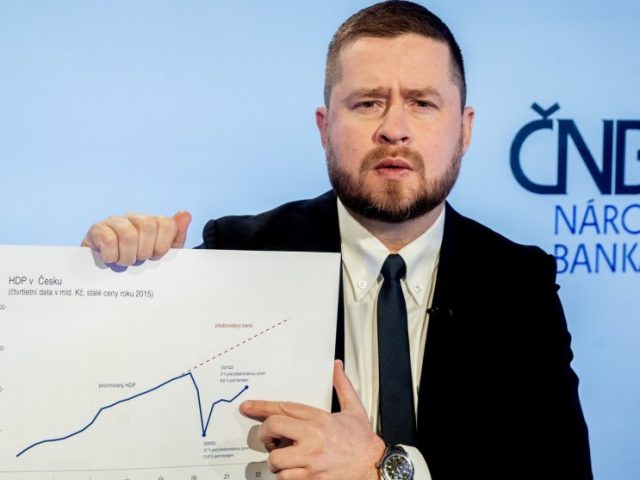 The newly appointed governor of the Czech National Bank (CNB), Aleš Michl, said that he plans to massively increase the central bank’s gold reserves from the current 11 tonnes to over 100 tonnes or more.

It was almost inevitable that the Czech Republic would buy more gold.

On 26 May in an interview with Czech publication Ekonom, the incoming governor of the Czech National Bank (CNB), Aleš Michl, said that he plans to massively increase the central bank’s gold reserves from the current 11 tonnes to over 100 tonnes or more.

Conclusion: Aleš Michl understand that US dollar is slowly dying.

Talking to Ekonom’s editor Vojtěch Wolf, and deputy editor-in-chief, Martin Petříček, the soon to be central bank governor explained his approach to the management of the Czech central bank’s reserves:

Ekonom question: “You have repeatedly said that the CNB should manage foreign exchange reserves differently, which have swelled in recent years. What is your vision on that?”

“The reserve management team is professional, they have assignments from the bank board that perform well. I would like to give them a new assignment, to slightly increase the expected return on reserves.

To do this, you need to have more stocks and more gold. And to do it gradually, step by step, it is a change of strategy over years.”

Ekonom question: “How should the proportions of the individual components develop?”

“In our Assets and Liabilities Committee, I will propose to, gradually over the years, increase equities from the current 16 percent of reserves to 20 percent or more. The central banks of Switzerland, Israel or large state sovereign wealth funds, led by Norway, do the same.

And I will propose to have more gold, from 11 tonnes to 100 and more tonnes. Gradually, over several years.

Gold is good for diversification, it has zero correlation with stocks.”

The 44 year old Michl has been a member of the Czech central bank board since December 2018, and will begin his 6-year term as CNB governor on 1 July 2022, after having been appointed to the role by Czech president Miloš Zeman.

The Ekonom interview also gives some insights into how the new CNB governor thinks about managing the Czech central bank’s gold and foreign exchange reserves, with the word ‘wealth’ cropping up a number of times.

Michl – “My vision is to have a long-term profitable CNB. We are at a great loss now. I would like to set the strategy so that the expected return on assets, which are foreign exchange reserves, in the long run exceeds the cost of the central bank’s liabilities, which are mainly deposits of banks that we have to pay interest on.”

Ekonom question: “For what reason?”

Michl – “It is a vision to create a nation’s wealth that exceeds my six-year term.”

Elsewhere he again mentions the wealth of a nation:

Michl – “Rather than predicting another devastating event, it is much easier to conclude that a country, nation, population, business or enterprise can better mitigate the effects of disasters if they have savings, wealth, rather than a pile of debt in better times. ”

The incoming governor does not go into detail how the about how the central bank’s expanded gold holdings will contribute to an increase in the expected return on reserves, i.e. will the new gold be actively managed (i.e. through gold loans and gold swaps) at for example, the Bank of England, or whether the gold will be held in its own vault on an allocated basis.

Its not even clear where the current Czech central bank gold reserves are actually held. The annual financial report of the Bank for the year to 31 December 2021 does not specify the storage locations of any of the Bank’s gold, merely stating that the gold reserves are divided into 10.2 tonnes in a  “Long-term reserve – gold placed abroad (marketable bars) and precious metals held at the Bank in the long term (bars, coins, medals)” and 0.2 tonnes in an “Operating reserve – precious metals held for the production of coins“. Although previous years’ editions of the same report state that some of the gold was held as short term (1 month) gold deposits, which implies gold lending (probably at the Bank of England).

Currently, the 10.9 tonnes of gold which the Czech central bank holds only represents 0.4% of its total reserves. According to the World Gold Council’s “Changes in World Official Gold Reserves” data, the Czech National Bank’s gold holdings fell by 2.9 tonnes between 2002 and 2022 (mostly due to gold in the holdings being used to mint and issue Czech gold coins), meaning that it held about 14 tonnes of gold prior to 2002.

This is corroborated by the CNB’s own data, with a 2019 CNB research paper on central bank gold stating that:

“The CNB sold off the bulk of its reserve gold in 1998. By this time, gold had ceased to meet the CNB’s needs in terms of liquidity, security and returns. Furthermore, the CNB needed to increase its international reserves to be able to intervene in support of the Czech koruna at times of currency turbulence.

It thus sold 56 tonnes of gold, thereby gaining greater liquidity and return stability, and was left with 14 tonnes (CNB Archive, 2019).”

Judging by Aleš Michl’s plan to bring the CNB gold pile back up above 100 tonnes, he is probably not too impressed with his predecessors for having sold 56 tonnes of Czech gold in 1998.

And it’s not clear why in 1998 the CNB claimed that gold “had ceased to meet the CNB’s needs in terms of liquidity, security and returns” because that is obviously a false statement, but in 2022 those very same reasons are being used to justify increasing the Czech gold holdings 10-fold.

Back in the 1990s and early 2000s, a lot of central banks sold gold in circumstances which didn’t make financial sense, e.g. UK, Netherlands, Australia and Switzerland, and used equally bizarre claims to justify the sales. To this list you can add the Czech central bank in 1998.

More plausible reasons for those widespread central bank gold sales in the 1990s and early 2000s may have been to either close out existing gold loans to bullion banks which had no chance of being repaid without forcing the gold price far higher, or else it was redistribution of central bank gold holdings behind the scenes from Western central banks to rising economic powers such as China, à la the Brodsky and Quaintance theory.

The Visegrád Group – Birds of a Feather

In expressing a plan to increase its gold reserves by 10-fold to over 100 tonnes, the Czech central bank looks to be taking a page right out of the playbook of one of its Visegrád Group allies – Hungary.

Recall that in October 2018 in a surprise move, the Hungarian central bank, Magyar Nemzeti Bank (MNB), announced that it had increased its gold reserves 10-fold from 3.1 tonnes to 31.5 tonnes.

The proposal of the incoming Czech central bank governor, Aleš Michl, to increase Czech gold reserves from 11 tonnes to more than 100 tonnes is a practical carbon copy of the Hungarian move, in terms of percentage increase (i.e. a 1000% increase, or 10-fold).

In 2021, the Hungarian central bank then raised the stakes further when it bought another 63 tonnes of gold bars, and in doing so tripled the its gold holdings from 31.5 tonnes to 94.5 tonnes.

Likewise, fellow Visegrád Group member Poland sent shockwaves through the gold market when the Polish central bank announced in July 2019 that it had bought 125.7 tonnes of gold in London (100 tonnes in 2019 and 25.7 tonnes in 2018), thereby boosting its gold reserves at the time to 228.6 tonnes.

Slovakia claims to hold 31.7 tonnes of monetary gold reserves, all of which is stored at the vaults of the Bank of England in London. When Poland repatriated 100 tonnes of gold from London in 2019, there were calls from a former prime minister of Slovakia, Robert Fico, that Slovakia should do likewise. But nothing came of that call.