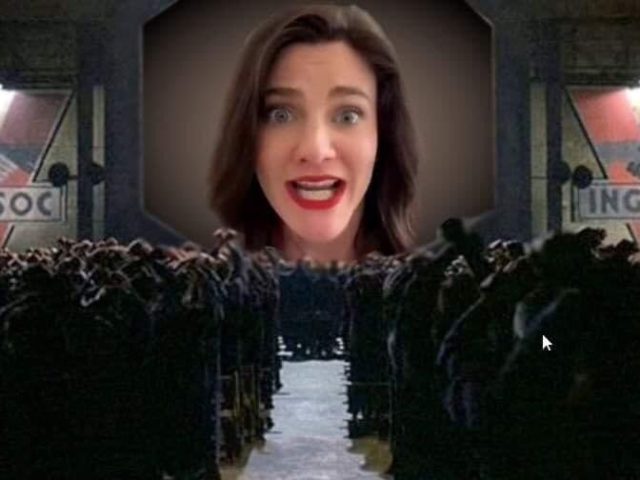 Nina Jankowicz, 33, “Minister of Truth” Resigns, Biden’s ‘Disinfo’ Board Paused
“The great irony here is that the board was designed to protect against the very thing that the board is accused of engaging in,” a DHS official told reporters during a Wednesday call.
Meanwhile, former George W. Bush appointee Michael Chertoff, and former Clinton AG Jamie Gorelick, will be tasked with reviewing the Disinformation board’s mission.
Chertoff (Devil in Russian language) is remembered as an officer on whose order a group of agents (Sivian Kurzberg, Paul Kurzberg, Yaron Shmuel, Omer Marmari) nicknamed “Dancing Israelis” had to be released from custody, who were assigned a very important task (as they themselves admitted in a TV interview): Record “Event” i.e. 9/11.
Glenn Greenwald Tweetered: It’s a cause of momentary celebration that the Department of Homeland Security was forced by popular anger to “pause” its Disinformation Board and the absurd #Resistance cartoon they hired to run it, but read this to see how angry WPost and @TaylorLorenz are that this happened:
The Washington Post – Homeland Security ‘paused’ newly created Disinformation Governance Board after its leader came under online attack.
The Department of Homeland Security has ‘paused’ it’s newly created Disinformation Governance Board, after its head, Nina Jankowicz, was called out for being a Russiagate truther, and going full “libs of TikTok” with creepy Disney-themed songs in a fake British accent – lending to the nickname “Scary Poppins.”
According to the Washington Post, the 33-year-old Jankowicz “was thrust into the spotlight by the very forces she dedicated her career to combating,” and has been “subject to an unrelenting barrage of harassment and abuse.”
Yes, because the head of a brand new Orwellian department shouldn’t be questioned.
Now, just three weeks after its announcement, the Disinformation Governance Board is being “paused,” according to multiple employees at DHS, capping a back-and-forth week of decisions that changed during the course of reporting of this story. On Monday, DHS decided to shut down the board, according to multiple people with knowledge of the situation. By Tuesday morning, Jankowicz had drafted a resignation letter in response to the board’s dissolution. – WaPo
On Tuesday night, DHS officials had an urgent call with Jankowicz where they gave her the choice to stay the course, even if the work was put on hold.
According to the report, “working groups within DHS focusing on ‘mis-, dis- and mal-information have been suspended.”
WaPo points to early tweets by journalist Jack Posobiec for launching what became an avalanche of attacks on the “Ministry of Truth.”
According to a DHS spokesperson, “The Board’s purpose has been grossly mischaracterized; it will not police speech,” adding “Quite the opposite, its focus is to ensure that freedom of speech is protected.”
Let us guess, war is also peace, freedom is slavery, and ignorance is strength.