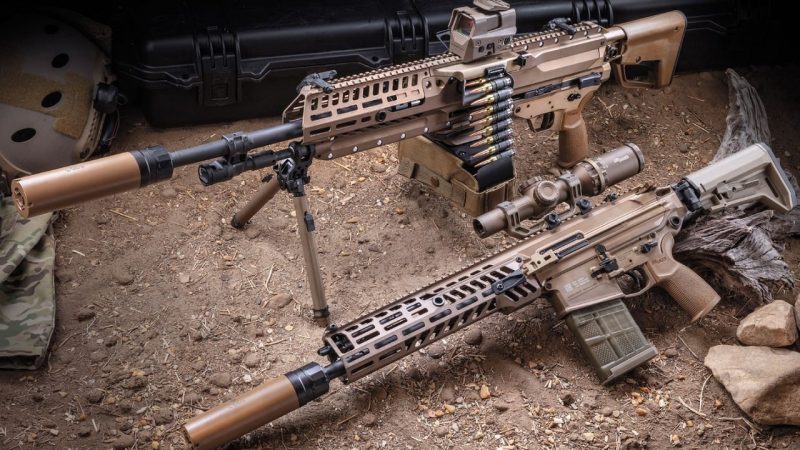 The U.S. Army had sought to replace the legacy small arms with a new weapon that could serve as both the main battle rifle and squad automatic weapon (SAW) – both chambered in the newly developed 6.8mm round.

The Army had been conducting tests of the three previously selected weapons from General Dynamics Ordnance, Sig Sauer, and Textron Systems. Each of the prototypes differed in design, yet all three were chambered for the aforementioned 6.8mm round, although with different case. The goal of the NGSW was to find a single weapon that could replace the two legacy platforms with an adaptable, modular firearm.

The Sig Sauer design was based on its MCX firearms line. The rifle version has a 13-inch barrel and thus is as compact as the M4 Carbine it will replace, while the machine gun version is equipped with a 16-inch heavy barrel and can also be belt-fed to provide suppressing fire. Both feature folding stock capability to allow for easier storage and transport. The Sig Sauer’s platform is also similar enough to the legacy systems that soldiers wouldn’t need additional training.

New ammo is named .277 SIG Fury and is the whole new cartridge. Clean sheet design loosely based off of the legacy 7.62×51 designed with a bi metal case (brass/SS) shooting a 135 gr bullet at 3000 fps. It’s unique feature is an 80k PSI chamber pressure.

End of the Line for the M16 Series

The XM5 rifle will serve as a replacement to the M4, which was introduced in 1994 and is essentially a shorter and lighter variant of the M16A2 assault rifle. The United States Air Force had first adopted the AR-15, later designated the M16, in 1963. The United States Army and United States Marine Corps began to issue the M16 in 1966 to units heading to Vietnam, where it had a not so much stellar start.

The U.S. Army will also “cut out” the SAW – as the XM250 automatic replacement will take on the role that has been served since 1984 by the M249 light machine gun, formerly designated as the M249 Squad Automatic Weapon (SAW).

The value of the initial delivery order for the contract is $20.4 million for weapons and ammunition that will undergo testing, the Army also announced. The contract also covers accessories, spare parts, and contractor support. It will also provide other Department of Defense (DoD) services, and potentially, Foreign Military Sales (FMS) countries the opportunity to purchase the newly selected NGSW weapons.

And why Sig Sauer win?

the fact that Sig was the ONLY company in the end to produce a rifle, LMG, and ammunition combination that actually met the Army’s minimum requirements cannot be overlooked.

Multiple companies submitted options. Only three companies survived the first cut by showing they had a credible potential to be better. One of those (interestingly enough, the Army favorite, Textron – the NGSW RFP was literally written around what AAI – later Textron – was telling the Army they could deliver after 13 years of development that the Army had already funded) flopped in final testing phase and was withdrawn.

That left two choices – the GD/Beretta/True Velocity/Lone Star (replacing GD, once GD realized they were going to lose) and Sig.

The GD/Beretta team didn’t even bother submitting a real LMG. They offered a heavy barrel version of their rifle, with a bipod. A 20 round heavy barreled rifle. For a program whose core (and original goal) was all about selecting a squad light machinegun. Plus, being bullpups, the RM277 variants brought ALL the typical and inherent downsides of bullpups to the table. But, GD (who made the initial basic design choices before they even looked for partners to do the detailed work or develop the ammo) chose a bullpup layout as the only way they could see to get the necessary performance the Army specified, using what was pretty conventonal ammo.

Sig, OTOH, adapted an existing GPMG design (that had proven itself very useful and desirable to SOCOM already) into a slightly smaller LMG (thus having an actual LMG to offer), and adapted an existing and in production rifle platform. So they knew they already had most of the bugs worked out at the beginning.

Now they just had to.figure out how to hit the performance requirements without being too long (as a 20″ barrel like the GD plan would have been) in these conventional layouts. So they developed a new cartridge case design that is actually more.innovative than the True Velocity case (overall) that allowed them to hit the required velocities in a 1e” barrel with minor tweaks to some internal components. Cutting edge barrel.manufacturing also allowed them to achieve DOUBLE the Army required barrel life, even with the ridiculously high chamber pressures required.

So, as of October/November 2021, the Army was faced with the choice of:

1. A bunch of guns that had failed out of testing a few years earlier. (FN, Desert Tech, etc.)

2. A highly ambitious program (AAI/Textron, with their innovating CT cased ammo from the LSAT program) that the Army had already dumped tens of millions of dollars of R&D into… that absolutely failed to deliver when crunch time arrived.

3. An offering that really only promised lighter cartridges, but otherwise was lacking in real.innovation, had ergonomic and operation problems inherent to the basic layout, and the second biggest part of the program goals effectively ignored.

4. Sig, who offered ammunition that delivered on requirements (albeit not as lightweight per round than the other companies, still lighter than equivalent traditinal brass cases would have), and two weapons platforms that both met (and in most regards, exceeded) the program requirements, and both of which were based closely on proven systems in actual production and use.

I called this result back in 2019. If the Textron program didn’t deliver a credible performance at an acceptable price (yes, it would have been higher because of the unique nature of ammo and weapons, but as long as it didn’t head into “completely unaffordable” the price would be OK), then Sig was going to win. The LSAT derived Textron offering was the best option, *provided* it worked… but it was a hugh risk option *because* every piece of it was groundbreaking. All they had to do to.
win was *work* and not break the bank.

Sig was offering the Army what they actually asked for, at a very low risk, with readily estimated actual costs that we could reliably presume would be reasonable. So they were the clear “safe bet” overall and “Plan B” if Textron failed (as they did).