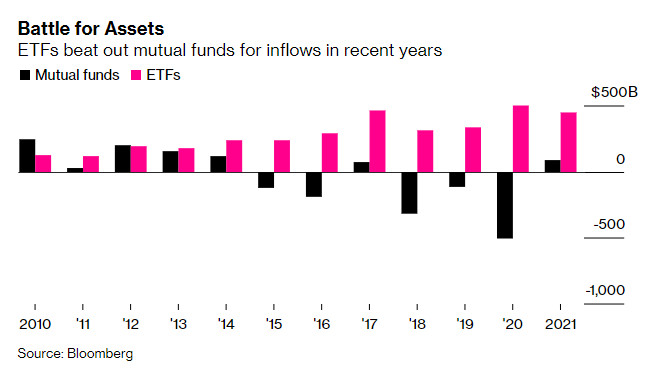 2021 is set to smash records, with $488.5 billion and counting moving into ETFs in just 7 months so far this year, far surpassing the previous full year record of $497 billion from 2020, according to Bloomberg.

The move comes at the same time the mutual fund industry is seeing an exodus from its products into ETFs, which are easier to trade and more tax efficient. Almost all major firms now offer a plan to “convert” from mutual funds to ETFs. Mutual funds saw net withdrawals of $506 billion in 2020.

Fund assets are up a record $6.6 trillion, Bloomberg notes, up from $3.7 “at the height of last year’s selloff”.

ETF expert Eric Balchunas of Bloomberg said: “There’s a format change. In the same way that people went from buying CDs to using streaming or digital music, or from using cabs to Uber.”

Among other reasons that people move to ETFs is a “mistrust” of money managers that has loomed since the 2008 financial crisis.

Ben Johnson, Morningstar’s global director of ETF research, told Bloomberg: “The stress period we lived through in the first quarter of 2020 further validated not just the ETF structure but the ETF ecosystem in its entirety. It gave more investors greater confidence than ever that this is a suitable way to package and deliver not just different market exposures, but different investment strategies.”

Vanguard – long known as offering the cheapest ETFs that investors can buy – remains top of the heap in terms of ETF flows, with their $239 billion Vanguard S&P 500 ETF tacking on $29 billion year to date and its $256 billion Total Stock Market ETF adding $21.5 billion. They’re followed by BlackRock Inc.’s iShares Core S&P 500 ETF, which added $13.1 billion, and the Vanguard Total Bond Market ETF that added about $12 billion.

Dimensional Fund Advisors is also helping facilitate conversions of ETFs into mutual funds. It has “shifted about $29 billion of assets into ETFs” already and has plans for more.

Nate Geraci, president of the ETF Store, said: “It will be paramount that every existing asset manager have a viable ETF strategy moving forward. The asset managers just now joining the ETF party are late, but they can still get in the door. The longer this goes on, the more difficult it is.”

And the concentration in the ETF industry is something to behold: according to Bloomberg, BlackRock, Vanguard and State Street Corp. account for about 80% of the ETF market and “control vast chunks of corporate America” as a result.

Fiona Cincotta, senior financial markets analyst at City Index, said: “The stock market has been on an incredible journey over the past year. That sense of wanting to get involved and that fear of missing out is a big driver for getting money invested in the market.”

And of course, we couldn’t mention ETFs without mentioning Cathie Wood, who had pulled in $15.3 billion this year.

Johnson concluded: “ETFs are an easy button of sorts that you can hit to get exposure to any number of different segments of the market, which draws from a much broader investor base than mutual funds ever had.”