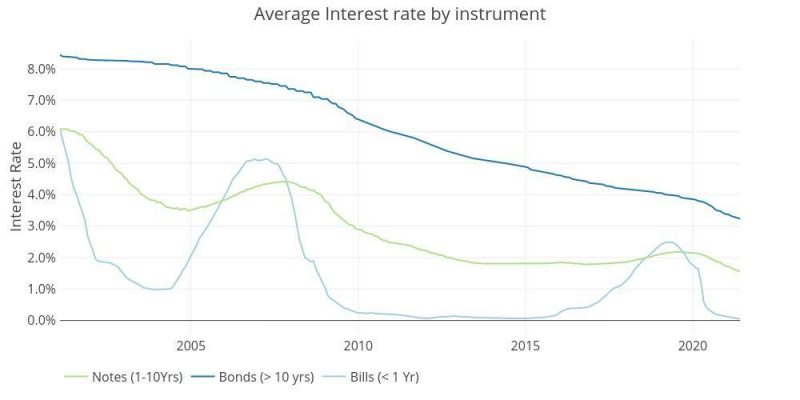 When the economy was shut down in March 2020, the government responded with massive fiscal and monetary support. The fiscal stimulus totaled $4T+ in relief packages. All of this spending was paid for with debt issued by the Treasury. The Treasury mostly issued short-term debt. With rates being held at zero by the Fed, and strong demand for short-term debt, it made sense to quickly raise cash using Treasury Bills as interest-free loans.

Note: By definition, inflation is an expansion of the money supply. In this article, inflation will be used interchangeably with rising prices (usually as a result of money supply expansion)

The Fed monetary policy was two fold, slash short-term rates to zero and inject $1.5 trillion into the long-term debt treasury market. The effect was to bring down interest rates across the entire yield curve. After the initial debt binge, QE went on auto-pilot, with the central bank buying about $80B a month in long-term debt (plus another $40B in Mortgage debt). Over the last year, the Treasury has continued to issue long-term debt, averaging more than the $80B the Fed has been buying. This has caused long-term rates to rise.

All of this fiscal and monetary stimulus is not without cost. Historically this type of activity almost always leads to higher inflation. The Fed may have recently indicated it wants higher inflation, but this is not true. This stance simply provides cover for them to not act in the face of rising prices. To actually fight inflation, the Fed would have to increase short-term rates above the rate of inflation. First Part of this series went into detail about how US short-term debt has doubled from $2.5T to $4.5T. This makes even small changes in short-term rates an immediate risk to the federal government, not to mention the much higher rates needed in a true inflation fight.

In theory, the Fed could leave short-term rates at 0% while ending QE and even shrinking its balance sheet. This would push long-term rates up to combat inflation. In the short/medium term the Treasury can mathematically handle higher long-term rates because it takes time for the higher rates to work their way through long-term debt. See the chart below that shows how the last tightening cycle worked its way through the average interest rate across debt instrument. Specifically, look at Notes compared to Bills. The average weighted interest rate on Bills moved very quickly where the rate on Notes barely had time to increase before rates dropped again.

In summer 2020, the Treasury issued enough debt to build up a significant cash reserve. In response to rising long-term rates in Q1 2021, it appears the Treasury strategically used its cash reserves to slow down the issuance of long-term debt. With total short-term debt outstanding already so high, the cash balance gave the Treasury ammunition to decrease debt issuance just as a $1.9T stimulus bill was passed and inflation was set to explode higher. This would have been perfect timing to support the Feds narrative that inflation is transitory to keep expectations from snowballing out of control.

If inflation doesn’t slow in the coming months, the Fed may be forced to step in. With the Treasury poised to issue more debt, it can no longer rely on its one-time use of excess cash reserves. This will put more pressure on the Fed to clamp down long-term rates by increasing rather than decreasing QE. Yes, the Fed may decide to print more money (leading to higher prices) to fight rising inflation expectations (higher long-term interest rates).

Last year, when the pandemic hit, the US Government started spending trillions of dollars. Massive spending plans were approved in the name of stimulus and COVID relief. Because the government does not have much money on hand, and taxes cannot quickly be raised, the Treasury issued trillions in debt. The markets can easily absorb short-term US Treasury Bills, so when the Fed abruptly cut rates to 0%, the Treasury responded by issuing short-term debt to the tune of $2.4T from March to June 2020.

In tandem, the Fed bought up trillions of dollars in US Debt, but the Fed was buying on the long end of the curve while the Treasury was issuing debt on the short end. This caused long-term rates to collapse. The Fed purchased enough long-term debt to absorb more than a year’s worth of long-term debt issuance. The chart below shows how the month over month and cumulative change in the Feds balance sheet compared to the Treasury Debt Issuance of long-term notes and bonds.

This action by the Fed had a massive impact on long-term rates. The chart below shows the difference between the two bars above, specifically the difference in Fed Buying and Treasury issuance of long-term debt for each individual month since Jan 2020. These values are not cumulative. The right Y-Axis shows the month-end interest rate of the 10-year bond. Looking at this chart shows something extremely clear: When the Fed buying exceeds debt issuance, rates are flat or falling; however when long-term debt issuance surpasses the Fed’s buying, rates rise.

The impact of the Fed can first be seen as interest rates fell from 1.5% to .6% during the initial buying spree. After the initial burst, the Fed put QE on auto-pilot, buying “only” $80B a month in long-term Treasuries. However, because the Treasury was issuing more than $80B a month as depicted by the positive bars starting in June 2020, interest rates started rising.

This trend started to accelerate in November of 2020, as long-term debt issuance was outpacing Fed Buying by around $200B. Things really started to escalate in the first quarter of 2021 as Treasury Debt issuance surpassed Fed buying by $286B in March right as interest rates were crossing above 1.7%.

Then, suddenly, long-term debt issuance started falling in April and was almost even with Fed buying in May. This consequently led to a fall in long-term rates, which are now hovering back around 1.5%. How did this happen just as Biden was pushing through a $1.9 stimulus package? Unlike 2020, when short-term debt issuance was used to plug the gap,

Why such a massive and sudden drawdown in the cash balance? In truth, there could be lots of reasons, but it does seem extremely sudden. One would think the Treasury, led by Yellen, would be very deliberate and thoughtful about how to use up $1T+ in dry powder. For the past 3 months, the Fed has been shouting from the rooftops that inflation is transitory. At the June FOMC press conference, Powell stood up and explained how long-term inflation expectations remain well-anchored. A proxy for inflation expectations is long-term interest rates.

Had interest rates continued to rise similar to the recent trajectory (climbing from .8% in Nov to 1.7% in March), this would have been a difficult narrative to push. The Fed needs inflation expectations to remain in check or else inflation will be anything but transitory. Thus, the perfect time for the Treasury to pause issuance of long-term debt would be April-June 2021 just as the economy is re-opening and the Fed is forecasting inflation to be at its worst before coming back down.

While this is speculation, it would be a very strategic move from both Powell and Yellen. Regardless of the intention though, the problem is that the Treasury has now spent its large cash balance. It could return to the short-term debt market, but the outstanding balance is still sitting above $4T (see part 1). It needs to be converting that short-term debt to long-term debt while long-term interest rates are still low and the Fed is still buying. But the Fed is simply not buying enough at $80B to convert all that debt!

If inflation persists beyond a few months, then interest rates are going to rise in a hurry as the market demands higher rates. Adding fuel to the fire will be the Treasury debt issuance overwhelming the $80B Fed buying as it did from November to March.

Who is absorbing the long-term debt to keep interest rates from returning to the upward trajectory from Aug 2020 – Mar 2021?

With the economy reopening, the Treasury deployed its cash balance at the most opportune time, unless of course inflation numbers continue to increase (which based on all the data, anecdotal evidence, and liquidity in the repo market seems like a strong possibility). Unfortunately for the Fed, the Treasury will have to begin re-issuing debt again. Will it lean towards short-term debt hoping the Fed keeps interest rates low, or long-term debt hoping the Fed will expand QE?

But Fed may be constrained either way because it has its own problem. Powell must be praying that inflation readings come in low AND job numbers disappoint. If both don’t occur, then tough questions will be asked to justify more stimulus. Yellen and Powell may be best buds, but simple coordination will not be enough. They will need magic and luck to keep the course steady heading into 2H 2021 and 2022.

If the Fed is lucky enough to get low inflation readings out of its rigged CPI, it may provide cover to begin tapering. Rising long-term rates won’t have the same compounding effect on inflation expectations in a “low” inflation environment. Unfortunately, long-term rates will not be tenable over the medium term as the government has to finance more and more debt. As the market this year has indicated, when issuance surpasses Fed buying, rates have gone up. So what happens to rates when the Fed leaves the market entirely? Presumably, they go up a lot. How high will the Fed let rates go before re-entering?

Just because something is inevitable (US Debt spiral) does not make it imminent; however, the next six months of data may shine a bright light on all the irresponsibility over the last 12 years if inflation proves not so transitory. Chances are, the only thing transitory will be “talking about talking about” tapering.