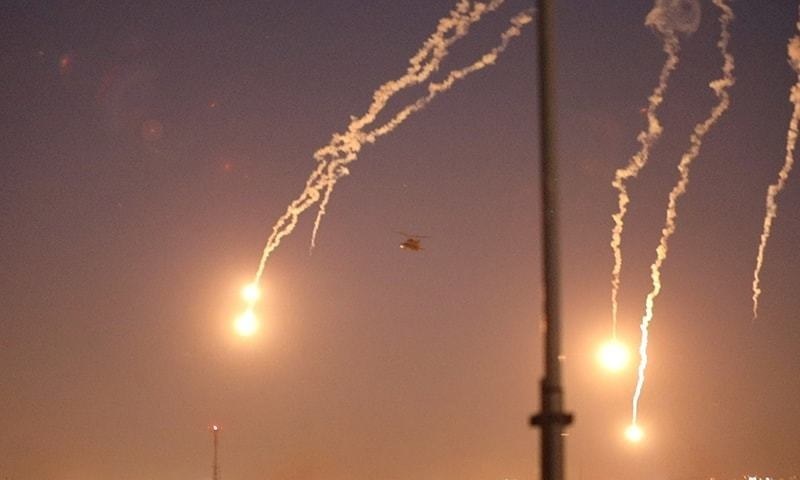 The US has bombed Syria and Iraq again, apparently just because it can, giving little or no thought to the consequences.

The timing and nature of the US airstrikes against Iraqi militia forces operating inside Syria and Iraq begs the question of what, if anything, the US hoped to accomplish.

Sometimes one must wonder if those who plan military strikes at the Pentagon have any situational awareness about the geopolitical realities in the regions they attack, or if their actions are guided by ignorance-laced hubris that shields them from any connection to the real world.

This disconnect with reality was on full display on June 27, 2021, when US military aircraft launched strikes against three targets affiliated with the Iraqi Popular Mobilization Forces (PMF), a state-sanctioned umbrella organization of primarily Iranian-backed Shi’a militias formed in 2014 to fight the Islamic State (IS, formerly ISIS).

Among the sites claimed to have been struck were a weapons storage facility, and another claimed by the US to have been used by the PMF to launch and recover drones. The sites, located in the vicinity of the Syrian city of Abu Kamal and the Iraqi border town of Al-Qa’im, were claimed by the US to be affiliated with the Kata’ib Hezbollah and Kata’ib Sayyid al-Shuhada brigades of the PMF. Locations allegedly affiliated with these two organizations, again in the Abu Kamal/Al-Qaim region, were struck by the US on February 25, 2021.

The US justified its actions as legitimate self-defense against a spate of drone attacks on its forces and facilities in Iraq, ostensibly at the hands of the targeted militias. In April, a drone damaged a top-secret CIA hangar in Erbil. A month later, on May 8, a drone attacked the Ain al-Asad airbase, but failed to cause any damage. On June 6, the same base was attacked by two drones, which were shot down before reaching their target. Then, on June 9, three drones attacked a US airbase in Baghdad. One of these was shot down, but two managed to reach their targets.

The attack profile of the drones is such that they evade detection until the moment of attack, meaning the US does not know with absolute certainty where the attacks came from. Moreover, because the drones in question can be launched from specially equipped vehicles, identifying a fixed site worthy of military attack is impossible. While no organization claimed responsibility for the attacks, the drones used were of Iranian origin. This affiliation, combined with the fact that the PMF has been observed by US reconnaissance operating drones from a site near Abu Kamal, appear to provide the underpinning justification for the strikes on June 27.

Just what the US hoped to accomplish through these strikes is unclear. From a purely military standpoint, the strikes in question did nothing to prevent the continuation of drone attacks on US forces in Iraq. The drones in question are cheap, mobile, and inherently difficult to target. While some may have been destroyed in the June 27 attack, there is little doubt that Iran is ready and able to replace any destroyed drones with new ones.

Likewise, the attack was next to useless if its justification was punishment-based deterrence. The timing of the attack – 01:00 local time – seemed to have been selected to reduce the potential for casualties, although it appears that several PMF militia, and possibly some civilians, were killed. Likewise, the infrastructure destroyed can be easily rebuilt. If the goal were to intimidate the PMF, the mission failed. The PMF has promised to avenge those who were martyred in the air strikes and said its attacks on US forces in Iraq would continue unabated.

The most perplexing aspect of this air strike, however, is its timing, coming only one day after Iraqi Prime Minister Mustafa al-Kadhimi attended a celebration of the seventh anniversary of the creation of the PMF, held at Camp Ashraf, the former headquarters of the anti-Iranian Mujahedeen-e-Khalq terrorist group, located about 100 kilometers (62 miles) northeast of Baghdad. The PMF paraded thousands of its fighters, along with tanks, rocket launchers, and drones, before a reviewing stand that, in addition to Kadhimi, included Defense Minister Juma Inad, Interior Minister Othman Ghanmi, Iraqi Army Chief of Staff Lt. Gen. Abdul Amir Yarallah, and PMF Chief of Staff Abdul Aziz al-Mohammadawi.

More important than the list of attendees, however, is what Kadhimi said about the PMF. In a tweet released during the parade, the prime minister noted that “[w]e attended the parade of our heroic army on December 6 (2020), as well as the brave police parade, and today we attended the parade of our sons in the Popular Mobilization Forces. We affirm that our work is under the banner of Iraq, and protecting its land and people is our duty. Yes to Iraq! Yes to Iraq, the strong and capable country.” Kadhimi went on to highlight the fact that the PMF was a state service, and praised its role in the ongoing struggle against Islamic State.

To reiterate, one day after the prime minister of Iraq, in the company of his military and national security team, declared the PMF to be an essential part of his nation’s state security, the US undertook to bomb these same forces at locations in Syria and Iraq from where the PMF carry out the very anti-IS operations praised by the Iraqi PM – and did so without either informing the Iraqi government beforehand, or seeking its permission.

In response, Kadhimi convened an emergency meeting of his national security staff and issued a pointed condemnation of the US strikes as a clear violation of Iraqi sovereignty that would prompt his government to study all legal options in response.

That returns us to the original question: what, if anything, was the Pentagon thinking when planning these strikes? From a military standpoint, they accomplished worse than nothing. By attacking resources that can be readily replaced, all the US did was provide additional motive and justification for retaliatory strikes against US targets in Iraq, perpetuating the cycle of violence the attacks were ostensibly intended to halt. This appeared to be the case today after Iranian backed Shia militias launched an attack on the Al-Omar Oil Field, which the US uses as a base. From a political perspective, they alienated the very Iraqi government officials whose continued support they needed to justify their presence in Iraq– and, by extension, Syria – to begin with.

But it is the absolute dearth of geopolitical awareness that makes the US action so perplexing. It appears the US bombs simply because it can – consequences, be damned. We act like a bunch of petulant teenagers who, having dragged a hornets’ nest into a closed room, cry when, after kicking it, the hornets emerge to sting.