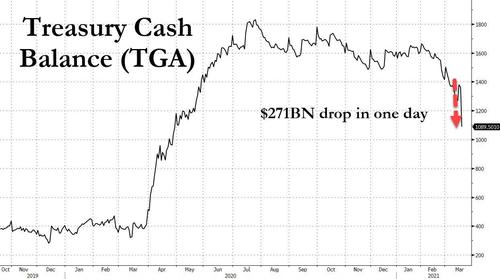 A month ago analysts noted that in line with the Treasury’s forecast for huge net debt drawdown in the current quarter, a record $1.1 trillion in cash and reserves was about to hit the market. Fast forward to today when catalyzed by the latest Biden stimulus bill, this flood has officially begun, and as the latest Daily Treasury Statement showed, on March 17, the Treasury cash held at the Fed in the Treasury General Account dropped by from $1.361 trillion to $1.090 trillion, the lowest since April 2020.

The offset to the drain in the TGA was a surge in bank depository cash, which soared to a record $3.873 trillion, a $220BN increase in one week.

Once this avalanche of liquidity in the form of cash and reserves hits the system and once deposits soared, it “would trigger a multi-faceted domino effect across assets, potentially pushing funding rates (FRA-OIS, repo, etc) negative”, and sure enough that’s precisely what happened today, with the rate on overnight general collateral repurchase agreements sliding below zero amid the monthly influx of cash from both the Treasury and GSEs.

None other than JPMorgan warned in its Q4 earnings presentation that a flood of new deposit activity could push rates even more negative.

The scramble for collateral is so aggressive that direct bidders in Thursday’s 4-Week Bill were awarded the largest share of the takedown in seven years despite the near-zero stopout yield, an indication that investors expect it may become more difficult to find positive-yielding short-term assets. For those who missed it, the Treasury sold $40BN four-week bills at 0.05%, the lowest stopout yield since March 26, 2020, and as Jefferies economist Thomas Simons wrote, the direct bidder award of 21% – largest since February 2014 – is an “extraordinarily large takedown that essentially defies explanation.”

“It is not clear why a bidder who participates in auctions so regularly as to justify bidding directly would want 4-week bills at half a basis point, but it seems like positive-yielding assets in this area of the curve are about to become harder and harder to find,” Simons said.

Which means to expect even lower negative rates: as Bloomberg’s Alexandra Harris notes, even when GSE cash exits, funding rates may remain pinned near zero as banks’ reserve balances at the Fed swell due to ongoing asset purchases and a faster deceleration in the Treasury General Account. It’s also what Zoltan Pozsar predicted, especially now that we know that the SLR won’t be extended, potentially forcing banks to shrink their balance sheets.

One more point: keep an eye on the Fed’s RRP facility as the combination of an “ever- expanding Fed portfolio” and a declining TGA releases more cash into the system, “some of that is likely to end up in the RRP facility rather than in bank reserve balances,” Wrightson ICAP economist Lou Crandall says in note.