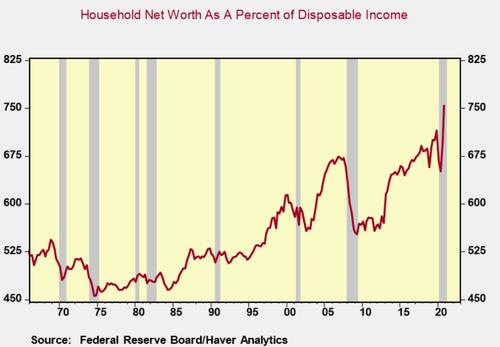 Once again, household portfolios are oversized and unbalanced, driven higher by a massive gain in a single asset (equities). Unbalanced portfolios have proven to be vulnerable to abrupt and sharp corrections. Will history repeat?

The most significant vulnerability for household portfolios is a sharp rise in market interest rates. And the odds of that happening in 2021 are far greater than what is expected by investors.

In 2020, household net worth increased an astonishing $12 trillion, nearly half of which was due to unprecedented gain in equities’ market valuation. The boost in equity values ($5.7 trillion) was the second-largest on record, bettered only by 2019 gain, and the fact that it occurred in a year marked by recession makes it even more unusual. In the recessions of the early 2000s and 2008/09, declines in household equity holdings were in the trillions of dollars.

The surge in wealth lifted the ratio of household net worth to income to a record 753%. That’s 100 basis points above the highs recorded at the housing bubble’s peak and nearly 150 basis points over the tech-equity bubble period. High wealth to income ratios are not predictive but have proven to be signs of vulnerability and tipping points.

Household portfolios are most vulnerable when a single asset class dominates. At the tech bubble peak, household holdings of equities equaled 26% of total asset holdings, nearly twice its historical average. At the height of the housing bubble, the market valuation of real estate accounted for 33% of total household assets, almost a third above the norm.

In 2020, history was repeating itself as equities accounted for 27% of total assets, above the tech-bubble level. Even after reaching record levels, equity investors are bullish on 2021, with many expecting double-digit returns. In the equity investors’ paradise, profits and valuations don’t matter, interest rates never rise, and stock prices only go up. In reality, none of that is accurate, and 2021 will test investors’ mettle.

Growth expectations for 2021 have ratcheted up, and so too have investors’ expectations on equity returns. Several analysts are expecting the fastest growth in the US economy since 1984, when the economy grew 7.2%, generating solid gains in companies’ earnings and higher stock prices.

In 1984, fiscal stimulus equaled 3% of GDP, whereas, in 2021, the scale is closer to 10%. The $1.9 trillion stimulus bill signed into law last week is humongous, unprecedented in scale and breadth. It provides consumers, state and local governments, airlines, and others with a trillion-dollar debit card while also providing billions in aid to cover unpaid rent, mortgage, and utility bills, tax-free unemployment benefits, forgivable loans to small businesses, and much more.

In 1984, the growth surge, driven by massive federal stimulus and borrowings, brought about higher inflation and a sharp increase in interest rates. The headline and core consumer prices rose 4% and 5%, respectively, and ten-year Treasury yields surged 400 basis points, hitting 14% at one point in the year.

In 2021 the economy will be absorbing enormous amounts of liquidity as nominal GDP expands close to 10% ($2 trillion), while broad money growth slows to a few hundred billion. Market interest rates will have to readjust upward, calibrating the liquidity needs of the economy and finance. A 200 basis point increase in 10-year yields to 3% in 2021 (half of what happened in 1984) sounds large, but long-term interest rates would still be low and far below nominal GDP growth.

Some analysts predict that a 2% 10-year, up only 40 basis points from current levels, would trigger a 20% correction in stock prices. How big of a drop in equity prices if 10-year yields rise to 3%? Investors forewarned.