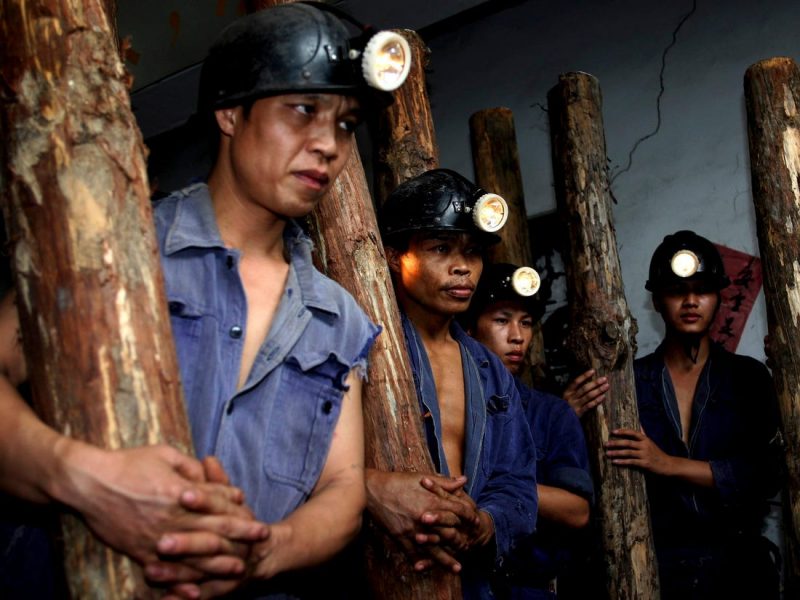 Something unexpected happened in China last week and it triggered a shockwave across Chinese bond markets.

The abrupt 1 billion yuan ($151 million) bond default on Friday of a state-owned coal mining company in Central China’s Henan province, one of China’s most populous provinces with more than 95 million people, set off reverberations across China affecting its parent company, industry peers and other state-owned bond issuers and triggered an investigation by the interbank bond market regulator. The default came just weeks after Brilliance Auto, a carmaker owned by the Liaoning provincial government which owns 25% of a venture with BMW, announced it would default on a 1 billion yuan bond which matured in late October.

As Caixin reports, Yongcheng Coal and Electricity Holding Group, which just last month got the highest possible, AAA rating from a domestic credit rating company, failed to repay an ultra-short-term bond that matured Tuesday, according to a statement posted by the Shanghai Clearing House.

The default of Yongcheng’s bond – which now has 24.4 billion yuan worth of bonds outstanding, among which 6 billion yuan will mature by the end of 2020 according to Bloomberg- immediately set off a chain reaction affecting other coal mining companies and local government financing vehicles in other provinces. As shown in the chart below, local government bonds as far away as Yunnan province were affected.

Coal mining enterprises in Shanxi and Hebei provinces either canceled bond issuance plans or slashed fundraising targets. Traded coal bonds plunged across China. On Friday, the SSE 50 Index of Shanghai’s largest stocks slumped as much as 2.1%, led by banks and insurers as bonds of Chinese commodity producers tumbled after the Yongcheng default.

“The wind has changed direction,” a senior bond market participant told Caixin. Under the pressure of debt replacement, many local governments may have more incentive to let debt-ridden LGFVs or state-owned enterprises go bankrupt and restructure, the market participant said.

To be sure, the Yongcheng default is likely just the first of many: China’s coal industry suffered a big hit from the Covid-19 pandemic as demand weakened. Data from the National Bureau of Statistics indicated that the sector’s profits fell 30.1% year-on-year in the first nine months. Yongcheng Coal is also involved in fuel processing, an industry where profits plunged 66.2% during the same period.

In response, the National Association of Financial Market Institutional Investors (NAFMII), China’s interbank bond market regulator, said last Thursday it was launching a “self-disciplinary” investigation into Yongcheng and related intermediary institutions. NAFMII said the probe would look into whether Yongcheng and intermediary companies fully disclosed risks and could result in penalties or referrals to “relevant departments” if fraud and violations are found.

As media reported a few months ago, parent company Henan Energy and Chemical Industry Group, the province’s largest state-owned company by assets, also defaulted on its own debt. The Henan government bailed it out, giving creditors some peace of mind, but this time, some institutional bondholders that failed to get their money back say they fear the provincial government won’t extend a helping hand.

Meanwhile, according to Caixin sources, the Henan government’s senior officials are debating whether the government should bail out Yongcheng.

The first company to take a hit was the parent company. In a statement, Henan Energy and Chemical said that existing debt financing instruments have cross-protection clauses for investors that were triggered by Yongcheng’s default.

Yongcheng and its parent have a total of 26.5 billion yuan of bonds that have such cross-protection clauses with a grace period of 10 business days. This means that if Yongcheng’s default constitutes a default of the parent’s corresponding debt, it may lead to further pressure on short-term debt payments.

The default, which marked a sea-change in how investors view China’s propensity to bailout SOE, immediately affected borrowing planned by other coal mining companies and local government financing vehicles (LGFVs). Shangqiu, a city next to Yongcheng, canceled a planned issuance of 500 million yuan of LGFV bonds Thursday. A bond market participant told Caixin that the underwriters for the Shangqiu bond said a day earlier that the issuance would go as planned.

And yet, as bonds tumbled the “Robinhooders” of the institutional world quickly swooped in to BTFD: according to the FT, vulture funds are racing to buy bonds of troubled Chinese state-owned enterprises, after the sharp sell-off.

“The central government won’t allow the situation to deteriorate as that could lead to systemic risks,” said a hopeful David Huang, a Shanghai-based bond fund manager who spent Rmb20m to buy a three-year note by Brilliance Auto for 20 cents on the dollar. “That creates an investment opportunity” he added hoping that the PBOC would do what the Fed did in March and backstop the distressed issuers.

Not everyone agreed: other investors viewed the defaults as a sign that government bailouts of distressed state companies, once taken for granted by most investors, could no longer be guaranteed. “Our investment decision had been based on the belief that triple-A rated state firms are safe investments regardless of their fundamentals,” said the chief ratings officer at a Shanghai-based bond fund. “That’s no longer the case.”

And as investors grappled with the new reality of a China where risk of default is once again an overarching consideration, they were also puzzled by the defaults in part because many of the SOEs had previously boasted seemingly strong fundamentals. As noted above both Yongcheng and Brilliance had received triple A ratings and each had more than 20 billion yuan in  cash on their balance sheet, according to their most recent financial statements.

“What else can we trust if both the rating agencies and financial statements aren’t credible?” asked the Shanghai fund manager.

Making matters worse, investors were also unnerved that Yongcheng and Brilliance have spun off profitable assets before defaulting, including Brilliance’s shares in the BMW joint venture: “This has set a bad example, that the SOEs can be as irresponsible as private firms in avoiding debt payment,” one Yongcheng creditor said, shocked that the Chinese government can be, gasp, “irresponsible”.

Yet for the BTFDers of the world, the crash presents a buying opportunity: managers of vulture funds told the Financial Times they had placed “significant” purchase orders for bonds issued by struggling SOEs, under the expectation that regional governments will step in (and effectively bail them out if they made the wrong decision: “If they let Yongcheng or Brilliance go under, no state firms in Henan or Liaoning will ever be able to tap the bond market again,” said Mr Huang. “The government won’t let that happen.”

Maybe… but suddenly bets that China will just keeping bail everyone out look far more risky. In a lengthy twitter thread, famed China strategist and finance professor Michael Pettis laid out his thoughts on the subject of vulture funds buying the troubled bonds, and why this could prove to be a catastrophic “strategy”:

Very interesting article: China-based high-yield funds have rushed in to buy bonds of troubled Chinese state-owned enterprises on the back of a sharp sell-off caused by the default last week of a Henan coal-mining SOE.

Their buying, however, has almost nothing to do with credit analyses and is little more than a highly-speculative, binomial bet on whether or not the government will step in, as they have in the past, and restructure liabilities in a way that resolves the default.

Basically these funds are betting that, once again, the regulators will be so frightened by the short-term impact of allowing a default that they back away and arrange a bailout. One fund manager cited in this article makes no bones about the strategy: “The central government won’t allow the situation to deteriorate as that could lead to systemic risks.”

He adds: “If they let Yongcheng or Brilliance go under, no state firms in Henan or Liaoning will ever be able to tap the bond market again. The government won’t let that happen.”

I spent much of my career trading developing-country bonds, and I’ve seen many versions of this game before. This really isn’t an investment “strategy”. It is nothing more than a very simple bet that the regulators still have enough firepower to prevent defaults, and that they think the short-term costs of allowing defaults still exceed the long-term benefits. Until the regulators decide that they cannot keep kicking the can down the road, a strategy of buying bad news will always be profitable, after which the strategy will always blow up.

This is just Russian roulette, in other words: you’ll probably win any given round, and every time you win you will be more convinced than ever that the odds are in your favor, but they aren’t. This “strategy” always ends the same way.

The irony here is that longer the game goes on, and the more investors play this game, the more they undermine the long-term ability of the market to act as an efficient allocator of capital, and the more costly they make it for the regulator to keep preventing defaults.

Once regulators believe that long-term costs of keeping the game going exceed short-term cost of allowing real defaults, or once too-high debt levels reduce their ability to kick the can further down the road, they will bite the bullet and allow the defaults to take place.

The only question is when will that time come: in the case of Yongcheng it was last Friday; the problem is that in China there are thousands of similar SOE, which are effectively insolvent absent government support, and if the rug is suddenly pulled from underneath them one by one, China can forget all about the great influx of foreign capital that it needs in a time when it hopes to fund its nascent current account deficit and replicate the US experience of having foreign investors fund China’s economic growth going forward.

Note: As our readers know for long time – there is no future for coal miners and coking plant.