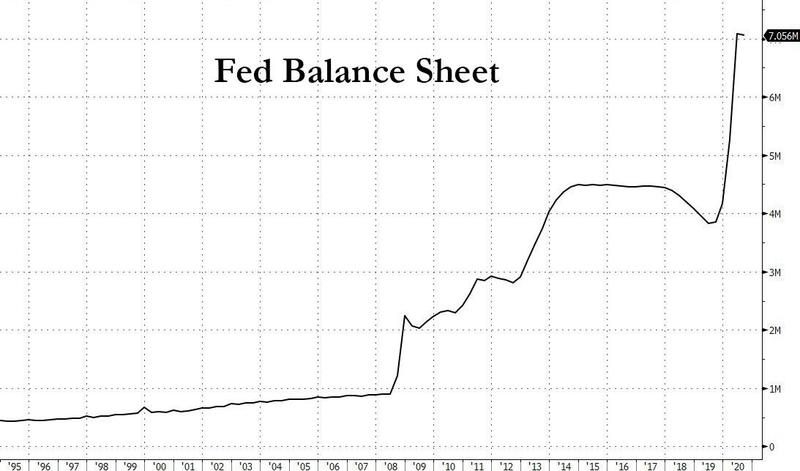 Earlier yesterday, in response to Neel Kashkari’s CNBC interview in which the Minneapolis Fed president said “I don’t see any moral hazard here” when asked if the Fed’s massive liquidity injections have blown a bubble, here is a chart of the Fed’s balance sheet, asking if he sees moral hazard here.
And while some analysts doubt Neel would see moral hazard in the chart above, if it hit him on the head, or even after the biggest asset bubble in history funded by $90 Trillion in central bank liquidity pops, his odds of a successful observation would increase drastically if the Fed follows the advice of senior Fed economist and deputy director of the bank’s financial stability division, Michael Kiley, who calculated that due to the Fed’s inability to cut interest rates further (spoiler alert: the Fed will eventually go NIRP), unless it unleashes another massive round of QE.
How much? Well, according to a paper published by Kiley, the Fed will need to monetize deficit, pardon, purchase bonds equal to 30% of GDP, or $6.5 trillion, in order to offset the impact of the zero lower bound. And since the Fed has already purchased a record $3 Trillion in bonds since March, that implies another $3.5 trillion in QE is needed.
And while the Fed’s latest minutes did not hint at any adjustment to the Fed’s current $120BN in monthly bond purchases, the paper will likely be used to bolster the case for increasing the Fed’s bond purchases in coming months, and certainly once there is a more than 10% correction in the market which has emerged as the clear-cut Powell Put.
But what is scariest is not that the Fed will continue monetizing every single dollar of US debt issuance for the foreseeable future, and perhaps indefinitely which considering the CBO’s latest forecast means a long, long time … but rather that the Fed no longer even pretends to know what it is doing: as the Fed economist admitted, his findings are based on models developed prior to the Covid-19 outbreak that “may fail to capture how pandemic shocks affect investment and other decisions.” In other words, as even Bloomberg concedes, “economists don’t really know how or whether the pandemic might disrupt the impact they expect from bond purchases on real economic activity.”
What is by far the scariest is that the US economy is now literally on perpetual life support. As recent events have shown too clearly, unless there is a fresh trillion in either fiscal or monetary stimulus, the economy and stock market would both disintegrate. And as Neel Kashkari said so clearly today in his CNBC interview, the Fed has – and never had – any other strategy of resetting this vicious cycle where ever more and more stimulus is needed just to avoid collapse – or as he put it, the Fed would never “start a forest fire now to avoid a far greater forest fire later.”
The only thing that Fed does have is doing more of the same debt-buying can-kicking down the street.