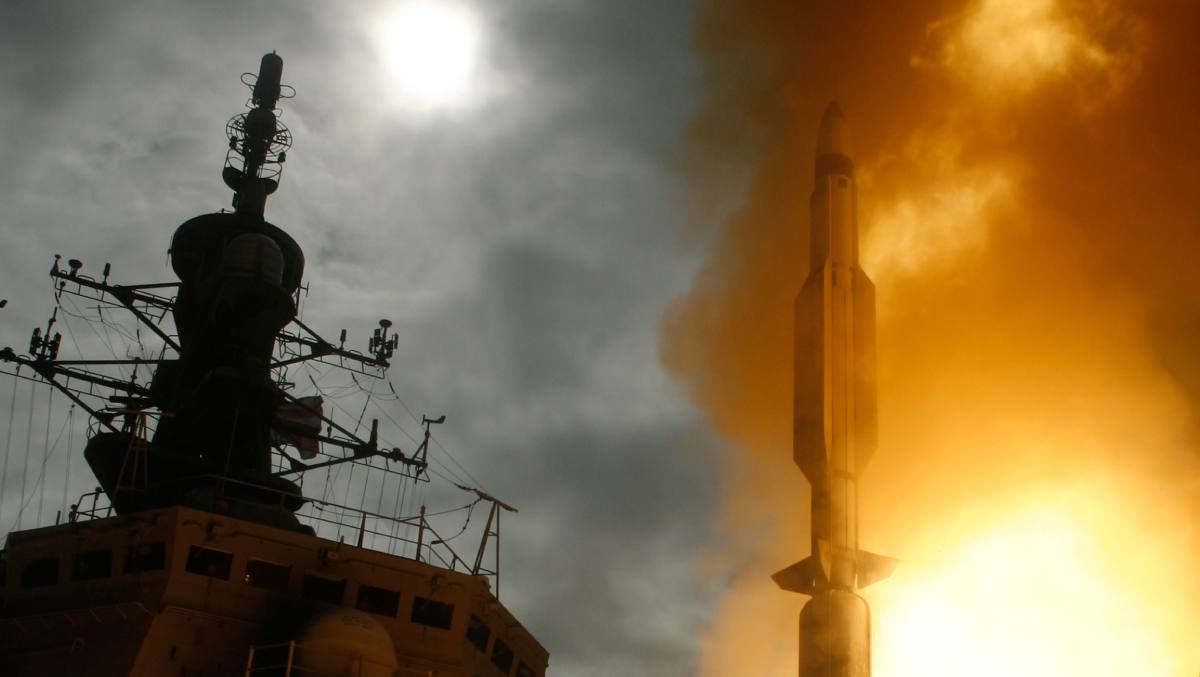 Washington and Tokyo have been allies for 60 years. Both agree they’re spending too much.

Japanese Defense Minister Taro Kono was seething after a June 3 briefing in his office. “Why didn’t you figure that out sooner?” he snapped.

Officials had just learned of a critical flaw in a U.S.-made missile defense system that would derail a multibillion-dollar defense deal.

Three years previously, Japan had decided to buy the $4.2 billion system, known as Aegis Ashore, amid a fusillade of missile launches by North Korea — not to mention veiled threats by U.S. President Donald Trump that its allies should spend more on their defenses, and buy American. 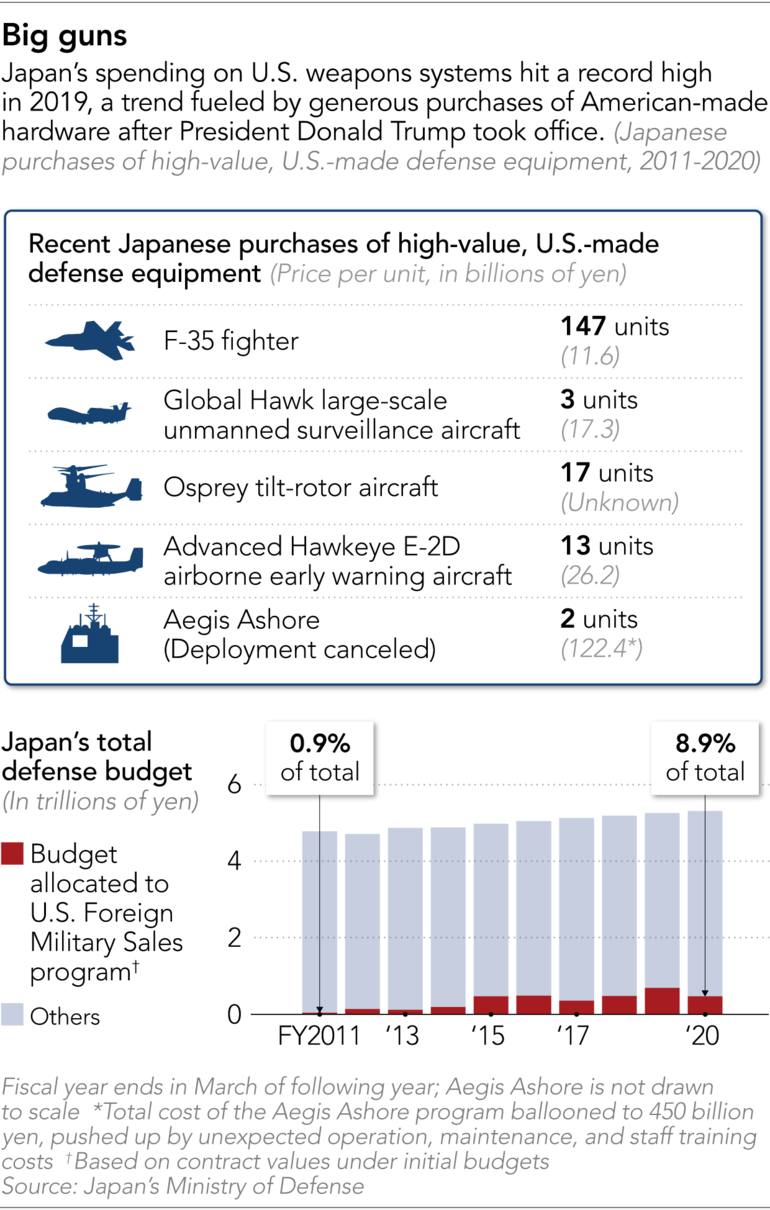 But now the Department of Defense was saying it would cost 200 billion yen ($1.89 billion) and take 12 years to fix a problem with the Aegis booster rocket, the one that Japanese officials had just discovered.

It turned out these boosters could fall in a much wider arc than previous estimates suggested, potentially hitting nearby residential areas in Yamaguchi and Akita prefectures where the system was to be based. Defense Ministry officials had only learned of the defect before informing Kono, who was furious.

In a previous era, canceling the project would have been off the table. Costly, often delayed armaments were part of the price Tokyo paid for its U.S. alliance, which dates from a 1960 treaty signed by current Prime Minister Shinzo Abe’s grandfather. Japan’s reliance on Washington to ensure security has undergirded decades of Japanese pacifism and low defense expenditures.

But it has become clear that times have changed. The day after he was briefed, Kono went to Prime Minister Abe’s office and told him, “We’ve just learned the system has a critical flaw. We cannot proceed with this plan.”

Even before his decision to cancel the program, Kono was widely considered a reformer. He has long criticized wasteful government spending. Eccentric by Japanese establishment standards, he has a penchant for wearing suspenders and carrying a small beige and violet case. He has never revealed what is inside, but aides joke that it is Japan’s (nonexistent) “nuclear briefcase.”

Other things set him apart from Japan’s mainstream political class: his fluent English, the product of a Georgetown education and Capitol Hill internship, and his 1.6 million Twitter followers. And while he loves taking on the establishment, he himself is its embodiment in many ways, the scion of one of Japan’s most formidable political dynasties.

His father was a foreign minister and president of the ruling Liberal Democratic Party, and his grandfather was a deputy prime minister. But he has established himself as something of a maverick who has opposed traditional LDP positions on issues like nuclear power generation.

Kono has pursued what he sees as wasteful military spending with a passion. Soon after assuming the post of defense minister in 2019, he directed a broad review of purchasing U.S. hardware through special agreements known as foreign military sales, which symbolized what many Japanese see as a one-sided relationship.

FMS agreements require the buyer to accept all conditions put forward by the U.S. Buyers are not allowed to negotiate price. Defense ministry officials complain that delivery dates are “estimates,” and delays, which incur no penalties, are common. All equipment required after the initial deal is an option to be paid separately, and cost overruns are endemic.”

In January 2020, Kono broke what is almost an official taboo on criticizing the FMS: “Japan and the United States should speed up efforts to resolve the issue of undelivered and unsettled arms purchases.” Aegis Ashore may have come into his crosshairs as part of this review, a project symbolic of the growing amount of FMS purchases in recent years. Kono asked officials to study potential outcomes if Japan were to cancel contracts for “equipment whose price has skyrocketed since its introduction was decided.”

A Pentagon spokesperson said of the litany of Japanese complaints that they are “aware of concerns expressed by the Government of Japan about the FMS process” and that “The United States remains committed to addressing these and other issues, and maintaining our important and steadfast security cooperation partnership with Japan.”

“We are continuously reforming the FMS process to make it more agile and effective,” said Lt. Col. Uriah Orland, a Department of Defense spokesperson.

But there is another reason mooted by experts about the collapse of the Aegis purchase: It simply would not work.

Northeast Asia is an increasingly dangerous neighborhood, with both a nuclear-armed North Korea and an expansionist China. According to a defense white paper released by the Japanese government in July, North Korea has tested 33 missiles since May 2019. These tests have included a simulated “saturation attack” where multiple missiles swarm a target, and it has also tested a lofted-trajectory missile, a type particularly difficult to shoot down.

Meanwhile, Chinese government ships sailed into the waters surrounding the Japanese-administered Senkaku Islands for the 111th straight day on Sunday, having spent weeks testing boundaries in the East China and South China seas.

China ‘s defense spending has increased at double digits annually for much of the past three decades, while Japan’s has only increased gradually over the same period. A new generation of Chinese weapons, particularly its ballistic missiles, could almost certainly defeat Japan’s defenses. Overwhelming an expensive antimissile system is fairly straightforward, given that anti-ballistic missile interceptors are many times more expensive than their targets.

“When the government said Japan needed Aegis Ashore, we already knew that missile defense was not effective in all situations,” Heigo Sato at Takushoku University said. “It would eventually take nearly a decade to deploy Aegis Ashore. In the meantime, our adversaries would be developing more effective weapons aimed at weakening missile defense.”