It took Jerome Powell just two days to confirm what analysts said late on Friday, namely that with the Fed expected to boost QE by over $3 Trillion (assuming Powell doesn’t cut rates negative), the Fed chair said that “there’s a lot more we can do” and just so everyone, including Ben Bernanke understands what the Fed does, he added “We print [money] digitally… we have the ability to create money digitally and we do that by buying Treasury Bills or bonds or other government guaranteed securities.” Of course, traders ignored the “other” part of Powell’s message, namely that the recovery would take at least until the end of 2021, or the implication that stocks first need to crash before the Fed unleashes more QE, and as a result S&P futures surged more than 2% overnigh.

Powell vowing to crank up the printing presses helped not just stocks, but also gold which traded at its highest price in seven years, fast approaching all time highs, and while silver jumped it has a way to go to catch up to gold … .. while West Texas oil rose above $30 a barrel for the first time in two months as producers in the U.S. and elsewhere continued to cut activity. 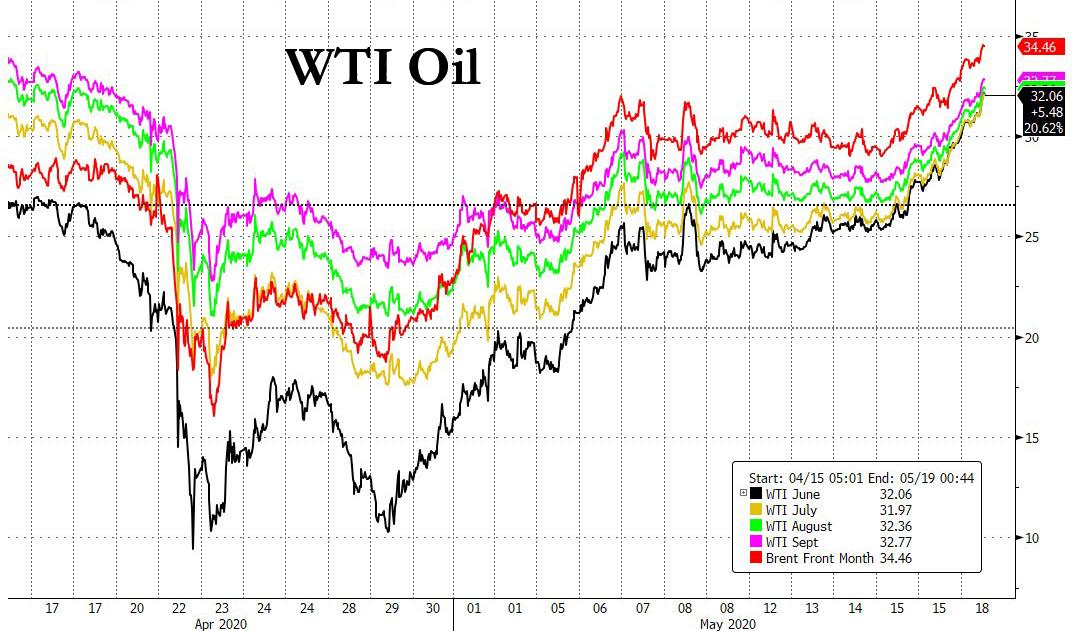 Furthermore, reports via Energy Intel noted that OPEC+ could reportedly extend current production cuts to year-end. The production cuts are to be eased from July according to the original pact. Sticking with OPEC, Saudi and Kuwait also agreed to suspend output at the Khafji field in the neutral zone in June, expected cuts to total 80mln BPD. Meanwhile, Friday’s Baker Hughes Rig Count continued to show receding US drilling activity. WTI June and July both trade comfortably above USD 30/bbl, with the front-month holding up heading into tomorrow’s June expiry, thus far suggesting subsiding fears of storage scarcity. Despite a lion’s share of open interest and volume in the July contract, participants will be observing the June contract after WTI May fell deep into negative territory heading into its expiration. Brent July also remains on the front-foot, towards the top if a USD 32.69-34.00/bbl intraday band. WTI June had risen over WTI July in early trade.

Powell also reiterated that the Fed hadn’t exhausted its options for aiding the economy and noted that the Fed can increase its emergency lending programs and make monetary policy more supportive through forward guidance and by adjusting the Fed’s asset-purchase strategy. Mr Powell will be speaking again before the Senate Banking Committee tomorrow, and then making some opening remarks at a Fed Listens event on Thursday. So plenty of opportunity for him to continue to get this message across this week.

Just a few weeks ago, the following chart from Deutsche Bank would have been a joke in serious financial circles. Not any more.

With the Fed’s balance sheet surging to $7 trillion amid heated discussions just how much bigger it will get in the next year as the Fed is tasked with monetizing the US bailout program, DB’s Torsten Slok has come up with a rather “ingenious” and disturbingly non-comedic estimate of what the potential maximum size of central bank’s balance sheet could be. To calculate it, Slok assumes that the Fed may, at some point, monetize all US assets, including but not limited to equities, residential real estate, commercial real estate, all treasury and corporate bonds, farmland and so on. 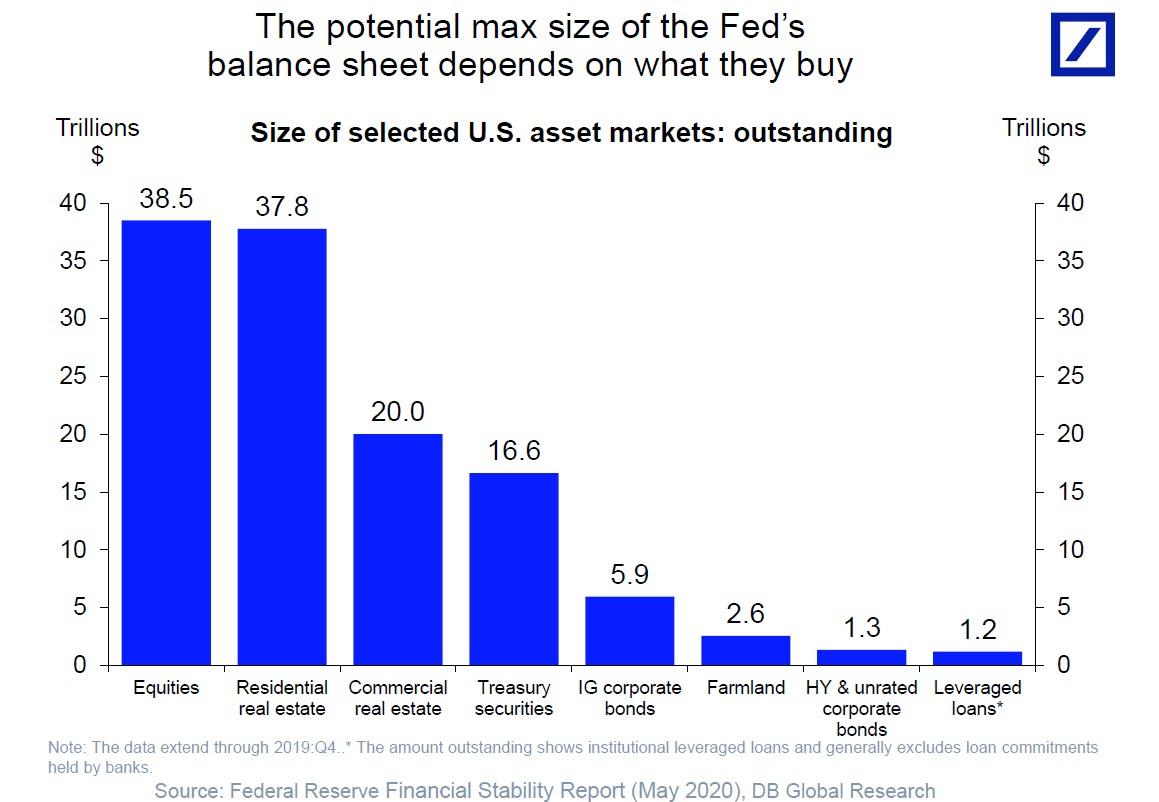 $130 trillion is also a number which even MMTers would admit is the endgame as there will be nothing left to nationalize, or privatize depending on one’s view of who ultimately owns the Federal Reserve.