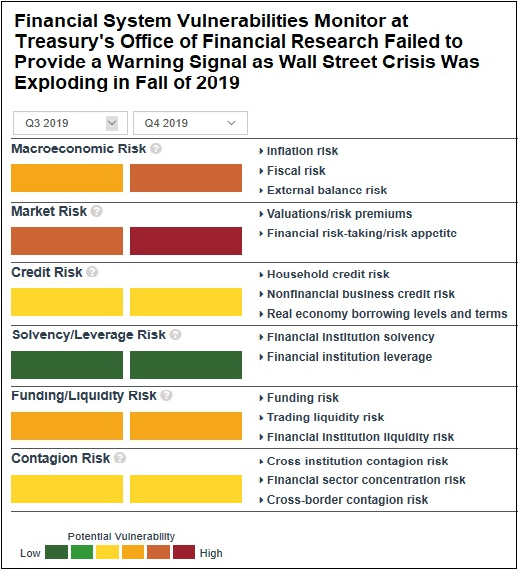 The Office of Financial Research (OFR) was created under the Dodd-Frank financial reform legislation of 2010 to keep the Financial Stability Oversight Council (F-SOC) informed on emerging threats that have the potential to implode the financial system — as occurred in 2008 in the worst financial crash since the Great Depression. The Trump administration has gutted both its funding and staff.

One of the early warning systems of an impending financial crisis that OFR was supposed to have created is the heat map above. Green means low risk; yellow tones mean moderate risk; while red tones flash a warning of a serious problem.

On September 17, 2019, liquidity was so strained on Wall Street that the Federal Reserve had to step in and began providing hundreds of billions of dollars per week in repo loans. By January 27, 2020 (before one death from coronavirus had been reported in the United States) Wall Street on Parade reported that the Fed had pumped in a cumulative total of $6.6 trillion in liquidity to the trading houses on Wall Street.

And yet, take a look at the OFR’s heat map above. Contagion Risk, Funding/Liquidity Risk, Solvency/Leverage Risk, and Credit Risk failed to flash red through either the third or fourth quarter of last year.

The extent to which federal regulatory and monitoring agencies have been dis-empowered from doing their jobs is becoming a critical concern to Americans in a time of both a health and financial crisis.

The Associated Press is reporting that a 17-page report from the Centers for Disease Control and Prevention team, titled “Guidance for Implementing the Opening Up America Again Framework,” was withheld from the public by the Trump administration after “agency scientists were told the guidance ‘would never see the light of day’ ” according to the AP report. The report has now been leaked to the AP.

Rick Bright, a former director of the Biomedical Advanced Research and Development Authority, has filed an 89-page complaint with the Office of Special Counsel alleging corruption and cronyism among the leaders of the pandemic response. In the complaint, Bright alleges that leaders at the Department of Health and Human Services ignored his early warnings about an impending shortage of N95 masks, asked him to consider an unproven drug being pushed by a consultant with political ties, and was pressured to award contracts to politically-connected companies. The head of the Department of Health and Human Services, Alex Azar, is a former executive of Big Pharma firm, Eli Lilly.

The Chairman of the Securities and Exchange Commission, Jay Clayton, the top watchdog of Wall Street, had represented 8 of the 10 largest Wall Street firms in the three years prior to his appointment by Trump to head the SEC.

Andrew Wheeler, the head of the Environmental Protection Agency, is a former coal industry lobbyist. The U.S. Treasury Secretary, Steve Mnuchin, was a foreclosure king during the last financial crisis. Folks could go on and on but you get the picture.