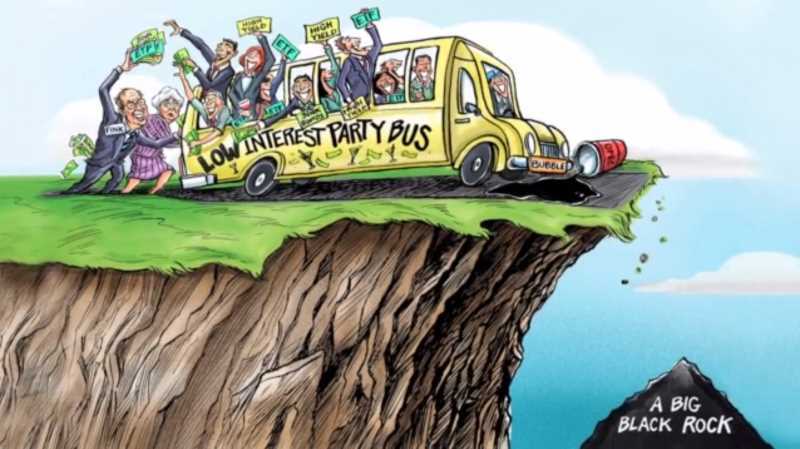 BlackRock begins buying junk bond ETFs for the FED today and it’s already at work for the Central Bank of Israel.

It’s off to the races today for BlackRock. The New York Fed, with authority from the Federal Reserve Board and backstopped with taxpayers’ money, will begin the first phase of the Fed’s unprecedented leap into shoring up the sagging prices of investment grade corporate debt and junk bonds. BlackRock has been selected by the New York Fed to be the investment manager for these bailout facilities and will begin Phase I today by buying up Exchange Traded Funds (ETFs) containing investment grade corporate bonds as well as junk bonds. Making the situation particularly dicey is that BlackRock just happens to be one of the largest purveyors of said ETFs.

The screaming conflict-of-interest that this raises in the minds of many is not ruffling any feathers at the New York Fed (which is itself a bundle of conflicts wrapped in a fraud monetization spigot that creates money out of thin air.) The New York Fed has swiftly dismissed this problem with the following language in its Investment Management Agreement with BlackRock:

The New York Fed’s answer to teetering highly-leveraged corporate debt is to set up a highly-leveraged bailout facility run by Wall Street insider, BlackRock, which is also managing U.S. securities purchases for the central bank of Israel.

The stimulus bill known as the CARES Act allocated $454 billion of taxpayers’ money to effectively bail out all of the New York Fed’s bad supervisory decisions over the past decade. The $454 billion has been designated as “loss absorbing capital” to soak up the first 10 to 25 percent of losses in the Fed’s alphabet soup list of bailout facilities. The New York Fed will use $75 billion of the $454 billion for its two corporate bond buying programs, the Primary Market Corporate Credit Facility and the Secondary Market Corporate Credit Facility. Those programs will be leveraged by an approximate factor of 10 to 1 to create $750 in corporate bond bailouts. Given the size of the corporate bond problem, we strongly suspect that’s just the beginning.

It’s the Fed, of course, that has allowed the mega Wall Street banks it “regulates” to issue this mountain of questionable debt since it oversaw its last $29 trillion Wall Street bailout from 2007 to 2010, which also resulted from its failed supervision of those same banks.

As clear proof that this is a further bailout of the mega banks on Wall Street that are supervised by the New York Fed (JPMorgan Chase, Citigroup, Goldman Sachs and Morgan Stanley), the New York Fed’s announcement yesterday about this Phase I said that one of the considerations about what corporate bond ETFs are purchased will be based on “the amount of debt held in depository institutions.” Another clue is that the firms that BlackRock will be initially allowed to deal with are the New York Fed’s “primary dealers,” which, of course, include the trading units of JPMorgan Chase, Citigroup, Goldman Sachs and Morgan Stanley.

Corporate debt, junk bonds, toxic waste in money market funds and commercial paper, along with stocks (which are now being accepted as collateral in the Fed’s Primary Dealer Credit Facility bailout program) now join the mega banks on Wall Street as too-big-to-fail. And with the Fed’s own balance sheet hovering just under $7 trillion from these debt nationalization schemes – wrapped in the garb of helping American families and small businesses – the Fed itself has become too-big-to-fail since the taxpayer would be on the hook for that $7 trillion along with the Federal government’s outstanding debt of $24 trillion.

The conflict that BlackRock is now in charge of buying up its own ETFs, which Carl Icahn predicted in 2015 was a flawed product that was going to fail in a liquidity crisis, comes on top of another conflict we reported last Tuesday: Federal Reserve Chairman Jerome Powell  Has Upwards of $11.6 Million Invested with BlackRock.

As analyst Pam Martens has discovered over the years, when it comes to the New York Fed, conflicts of interest can be brushed away as easily as a speck of lint on a black tuxedo. For example, as we reported in 2012, the wife of the prior President of the New York Fed, Bill Dudley, was being paid $190,000 annually by JPMorgan Chase as Dudley was supervising the bank and it was under investigation by New York Fed examiners for using insured deposits to gamble in derivatives in London and lose $6.2 billion.