The catastrophe in Class 8 heavy duty truck orders continues. Still struggling with the remnants of an order backlog that started almost two years ago with record orders in August 2018, the industry was unable to find an equilibrium prior to the coronavirus pandemic. Orders were sluggish and numerous trucking companies closed up shop altogether in 2019.

Post-pandemic, things look even more helpless. In April, the industry posted its worst order number on record as the economy ground to a halt as a result of the nationwide lockdown. Only 4,000 Class 8 orders were made last month, which is down 73% year over year and 44% from March.

It was the lowest reading since FTR began tracking orders in 1996. Many companies canceled or delayed new orders as demand, measured by the ratio of loads to trucks, fell 66% in April, according to the Wall Street Journal.

The uncertain outlook going forward has prompted many companies that would normally be shelling out for new infrastructure to rein in their spending. For example, logistics company TFI’s Chief Executive Alain Bédard said in an April 22 call: “Everything has been canceled.” 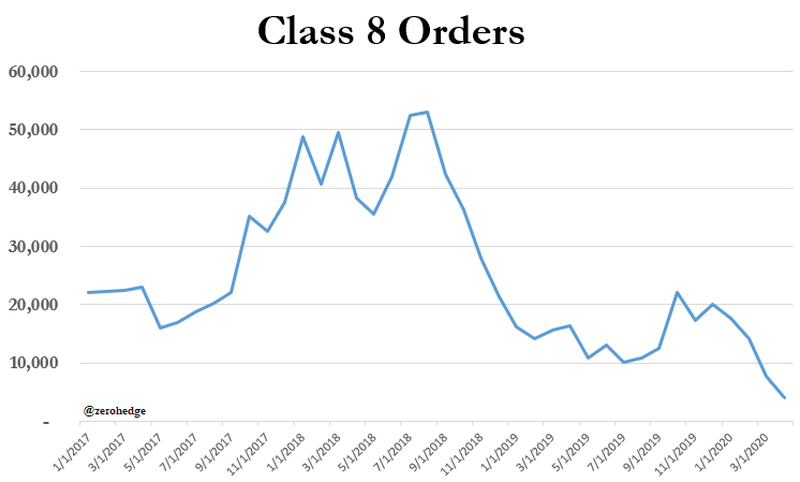 Don Ake, FTR’s vice president of commercial vehicles said: “Fleets don’t need a lot of trucks in the short term and they’re unsure what they’ll need in the next few months, so they’re being cautious.”

Ake says the backlog of heavy duty trucks is still above 100,000 units, but could dip below 2017 levels once factories are back up and running. “The industry was going slow anyway, and the backlog will probably go below that 94,000 mark [in 2017] eventually,” he said.

“Fleets will remain extremely cautious going forward, but we expect orders to modestly increase as the freight markets recover,” Ake told FreightWaves. “We have already seen some signs of life in refrigerated freight and expect improvement in dry van freight soon. The industry recovery will begin in May, but it will be gradual, just like the overall economy.”

Daimler Trucks has suspended production at its plant in Oregon and two additional facilities in North Carolina. “The work outpaced the current capabilities of the supply chain,” the company said at the time. The factories are set to re-open and resume production on May 11.

Kenny Vieth, president of market forecaster ACT Research concluded: “The ramp out of this is going to be arduous. You can only build at the speed of your slowest supplier.”

He continued: “Given broadly halted economic output leading to a sharp drop in freight volumes and rates, as well as more empty miles from fragmented supply chains further impacting carriers’ profitability, a negative order number was within the realm of possibilities.”