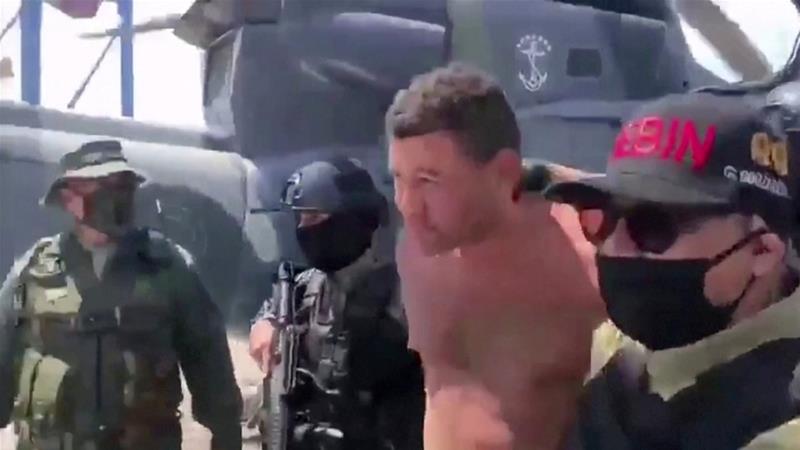 An astounding and unexpected development which is about to launch US regime change efforts in Venezuela straight back into the headlines. The Maduro government says it has captured two Americans who were leading a ‘Rambo-style’ armed coup effort.

Venezuelan President Nicolas Maduro says two American mercenaries have been apprehended after a failed coup attempt launched over the weekend.

In a live address on state television late Monday, Maduro brandished what he claimed were the US passports and drivers licenses of the two men, along with what he said were their ID cards for Silvercorp, a Florida-based security services company.

Silvercorp, it must be remembered from reporting days ago based on the Associated Press, is a Florida-based private security firm founded by a former Green Beret soldier who hooked up with Venezuelan military officer defectors for a half-baked ‘armed invasion’ of the socialist country in order to overthrow Maduro.

Nicolas Maduro: Among the terrorist captured today they were 2 U.S. military officials from Texas. According to a member of the band they are “intermediaries with Trump’s head of security”. Their names are Luke Denman and Aaron Barry, members of the company Silver Corp.

It total Maduro said 13 terrorists had been captured by authorities in connection with a bid to invade the country and stoke insurrection on Sunday.

Maduro paraded what were described as passports and other identification cards of Airan Berry and Luke Denman, described as employees of Silvercorp.

Thirteen alleged infiltrators were arrested after the attempted incursion, Caracas says, while eight men were shot dead in the showdown. During a televised address on Monday, the socialist leader displayed what he said were the passports and other identification of the two US citizens, named as Airan Berry and Luke Denman, who are now reportedly in custody.

Jordan Goudreau, an American military veteran who heads up a security firm based in Florida, Silvercorp USA, told several news agencies that the two men worked for his company, noting to Reuters: “They’re working with me. Those are my guys.”

While the Associated Press reported that it could not verify Goudreau’s claims, the outlet cited him as saying the two Americans were on a mission dubbed Operation Gideon, aimed at overthrowing Maduro on behalf of opposition figurehead Juan Guaido.

Despite images of an alleged $212 million contract making the rounds online, said to be the deal the opposition leader signed with Silvercorp to carry out the mission, Guaido denied that he had anything to do with the plot, but called on the Maduro government to respect “the human rights… of the people captured.”

According to Drew White, a former business partner at Silvercorp, Goudreau was introduced to Trump’s longtime bodyguard Keith Schiller through a mutual acquaintance in private security, accompanying him to meet with Guaido’s representatives in Miami last May, the AP reported. While Schiller soon cut off contact with Goudreau, believing he was unfit to lead any mission in Venezuela, the veteran reportedly made his own contacts with military deserters inside the country and continued to plan operations.

Venezuela’s Interior Ministry first reported the attempted incursion on Sunday morning, when the group of infiltrators were intercepted as they made their way to the country’s shore on speedboats from Colombian territory. The ministry later published images of arms and equipment seized in the arrests, including machine guns, military rifles, and a large cache of ammunition.