Trump administration is “preparing to evacuate” about 1,000 U.S. troops from northern Syria “as safely and quickly as possible,” CBS reports.

“In the last 24 hours, we learned that [the Turks] likely intend to extend their attack further south than originally planned, and to the west,” Esper said. “We also have learned in the last 24 hours that the… SDF are looking to cut a deal, if you will, with the Syrians and the Russians to counterattack against the Turks in the north.”

This as President Trump has also announced the US Treasury is “ready to go” with sanctions on Turkey.

This also comes after a week ago Trump ordered the withdrawal of US troops from northern border posts ahead of a Turkish military incursion to establish a so-called ‘safe zone’. That decision has been met with fierce push back among Congressional leaders and pundits, angry at the US “betrayal” of its Syrian Kurdish partners, namely the US-funded and trained Syrian Democratic Forces (SDF).

In his comments to “Face the Nation,” set to air on Sunday, Esper further explainedthat American forces were now caught between the Turkish assault and the SDF.

“And so we find ourselves, we have American forces likely caught between two opposing advancing armies, and it’s a very untenable situation,” Esper said. “So I spoke with the president last night, after discussions with the rest of the national security team, and he directed that we begin a deliberate withdrawal of forces from northern Syria.”

Following a Friday incident wherein Turkish artillery shells landed near US positions in Kobani, Pentagon officials accused Turkey of deliberately “bracketing” American forces by firing on both sides of the observation post.

While Turkey claimed it was a ‘mistake,’ US officials said Ankara had known about that specific base for months and that it could have only been intentional.

Esper said on Sunday that US troops “have the right to self defense and we will execute it if necessary” when asked about the incident and future rules of engagement.

Meanwhile Trump tweeted early Sunday: “Very smart not to be involved in the intense fighting along the Turkish Border, for a change. Those that mistakenly got us into the Middle East Wars are still pushing to fight. They have no idea what a bad decision they have made. Why are they not asking for a Declaration of War?” 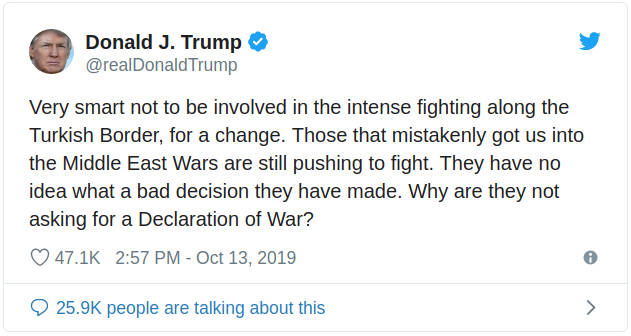