The End Is Unforeseeable. Former Federal Reserve Chairman Alan Greenspan recently said he wouldn’t be surprised if yields on U.S. bonds turned negative and if they do, it wouldn’t be “that big a of a deal.”

That seems to be a sentiment widely held in central banking circles these days, but it’s wrong. Negative interest rates represent a threat to the financial system. 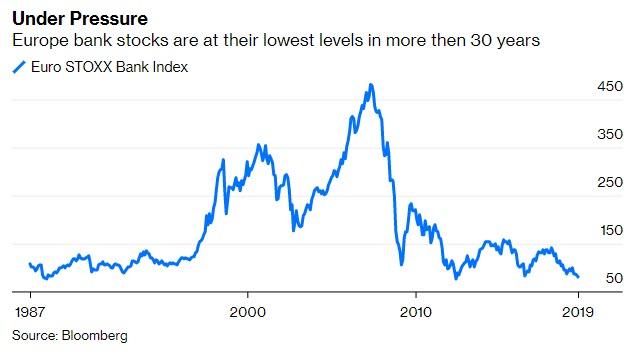 To understand why, let’s start with the existing fractional reserve banking system, which is more than a century old. For every dollar that goes into a bank, some set amount (usually about 10%) must go into a reserve account to be overseen by the central bank. The rest is either lent out or used to buy securities.

In other words, the fractional reserve banking system is leveraged to interest rates. This works when rates are positive. Loans are made and securities bought because they will generate income for the bank. In a negative rate environment, the bank must pay to hold loans and securities. In other words, banks would be punished for providing credit, which is the lifeblood of an economy. As German bankers recently explained to the European Central Bank:

We already have a devastating interest rate situation today, the end of which is unforeseeable,” Peter Schneider, who represents public-sector savings banks in the southern German state of Baden-Wuerttemberg, said on Wednesday. “If the ECB aggravates this course, that would hit not only the entire financial sector hard, but especially savers.

Valuation models are another area of finance that need to be tweaked in a negative rate environment. Nobel prizes have been awarded to economists that developed concepts such as the efficient frontier, the Capital Asset Pricing Model and the Black-Scholes option pricing model. But when a negative value is assumed for the risk-free rate in these types of models, fair value results shoot off toward infinity. With trillions of securities and derivatives dependent on these models, valuation is critical.

In a similar vein, pensions use a discount interest rate to determine if they are properly funded. If one plugs in a negative interest rate as the discount rate, all pensions would technically be underfunded. The only pensions that would be properly funded would be those with assets exceeding expected liabilities. No pension is set up this way. Negative rates on fixed-income securities also means there is no way pension funds can ever generate enough income to meet their obligations.

When repurchase, or repo, rates go negative, lenders of securities must pay rather than receive income. Why would anyone lend out their securities if they also must pay for the privilege of doing so? Repos are the basic plumbing of the financial system, enabling the trade and settlement of securities transactions. If this market becomes dysfunctional, it is akin to the pipes in your walls leaking.

To see the results of low or negative rate environments, look no further than the euro zone and Japan. They account for 87% of the negative rates worldwide. Europe is essentially in recession with negative GDP in Italy, Germany and elsewhere. Its banking system is a mess, thanks to negative rates. As the chart below shows, European banks are trading at the lowest levels in more than 30 years.

Japan is not doing much better. Economists are projecting negative GDP in the fourth quarter and the Japanese banking system is even worse than Europe’s, trading at some of the lowest since the early 1980s. 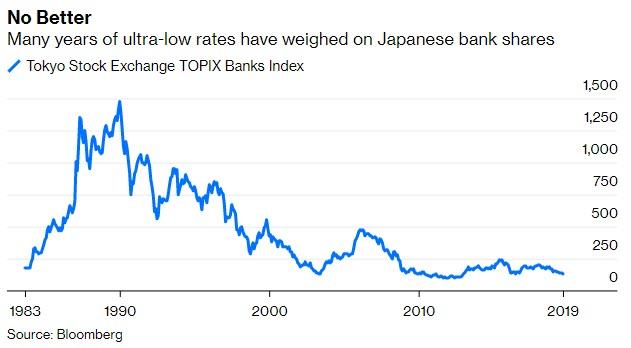 These are not isolated occurrences. The first instances of modern negative interest rates arrived in Switzerland in the 1970s. As Bloomberg Opinion Columnist Stephen Mihm recently detailed, the results were not pretty.

The U.S., UK, Canada, Australia and New Zealand are the only developed bond markets that do not have negative rates anywhere on their yield curves. Should these countries join the rest of the developed world in moving to negative rates, the financial system will be under much more stress. If negative rates become more widespread across the globe, then the financial system needs to be rebuilt on a new set of assumptions. The problem is we do not yet know what those should be or how they would work.