A new quarterly report from logistics company DHL, measured global air and sea cargo trade volumes between March and June, found trade data continues to deteriorate in the US and China as there is still no resolution to end the trade war, reported South China Morning Post (SCMP).

Chinese imports were “losing significant momentum,” the report stated, indicating the epicenter of the slowdown was situated in basic raw materials, capital equipment and machinery, and consumer fashion goods. The loss of momentum in DHL trade data has also been confirmed in official Chinese import data releases.

The report indicated that the US trade outlook is more dangerous than China: DHL expected a “significant downturn, driven by heavy losses in exports outlook.” DHL said both air and sea freight have plunged into negative territory in 2Q19, with extreme weakness in basic raw materials, chemicals, and technology.

“The declining outlook for US exports indicates that, so far, the US is missing its goal of strengthening its export economy with a harsher trade course against China,” DHL said.

DHL’s Global Trade Barometer measured air and sea container freight for seven countries, which together accounted for more than 75% of world trade

The report focused on early-cycle commodities to detect turning points in global trade flows — goods such as automobile bumpers, touch screens for smartphones, and brand labels for clothes.

If shipments of early-cycle commodities edged down, DHL was able to forecast lower demand finished goods.

During the observed period, there was a tremendous escalation of the trade war when President Trump raised tariffs on $200 billion of Chinese goods from 10% to 25%, while China retaliated with 25% tariffs on $60 billion of US goods.

A synchronized decline in global trade has also sent JPMorgan’s Global Manufacturing PMI to its lowest level for over six-and-a-half years and posted back-to-back sub-50.0 readings for the first time since the second half of 2012. 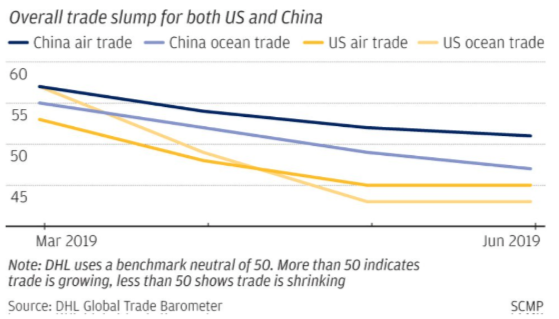