The world’s largest airline by international passengers hit an air pocket in the 12 months through April, with net income falling by more than two-thirds to its lowest level since 2002.

On the far side of the Arabian Sea, meanwhile, an upstart competitor has been limbering up. InterGlobe Aviation Ltd. looks to have flown clear of a horror year for India’s aviation industry, posting a fourfold increase in fourth-quarter profit Monday as the collapse of Jet Airways India Ltd. allowed the rest of the industry to bounce back.

With 50% of India’s domestic market, the carrier known as IndiGo isn’t resting on its laurels. Capacity on international routes rose by 60%, compared with 24% domestic growth, to about a fifth of the total. A long-held dream for IndiGo – and India, for that matter – seems within grasp: to become a serious player on global routes.

That’s a threat to Gulf carriers such as Emirates. About a quarter of India’s international air traffic is carried on Gulf airlines, rising to almost 40% if you include Etihad Airways PJSC’s late partner Jet. More than half of Indians flying overseas travel via hub airports in the United Arab Emirates, and routes to and from India alone account for about 9.4 percent of Emirates’ traffic.

A major change came at the end of last year, when IndiGo received the first of the 150 A321neoaircraft it has on order. Those longer-range jets put all of the Middle East and East Asia within reach, and potentially a slice of eastern Europe. At some point, perhaps with an order for wide-body aircraft, low-cost flights to London might even be on the cards.

Most airlines have to be careful about expanding their international presence because such routes tend to be more competitive than the sewn-up domestic market where they’re based. In India, it’s the other way around, with steep fuel taxes levied only on domestic flights and short-haul tickets that sell for just a few rupees making overseas flying a relatively attractive option.

IndiGo’s fleet of single-aisle planes and no-frills services means its costs are drastically lower thanthe competition. Per available seat kilometer, it spent about 5.17 cents in the year through March, about a quarter less than the 6.8 cents expense at Emirates. On top of that, IndiGo’s revenue grew 13.6% in the past 12 months on international routes versus 6.2% domestically.

There are risks in going global. With the demise of Jet, IndiGo is the only carrier in the industry with a share of departures above the 20% level where adding flights leads to compounding benefits for passenger traffic. Should its share of departures hit 50% – which seems likely, given forecast 30% growth in capacity over the coming 12 months – the carrier’s passenger share ought to stand a good change of rising towards 60%, at which point its domestic position will be near-impregnable.

That’s probably the one danger for IndiGo in this strategy. In taking on the Gulf carriers, it will have to go to war with deep-pocketed rivals in a market that’s thick with political risk. Routes between India and the U.A.E. are already at capacity, with further expansion dependent on diplomats agreeing to a revised air-services agreement in which Emirates and Etihad will want their interests protected.

Capital deployed on international routes is capital that won’t be deployed onsandbagging IndiGo’s formidable domestic position – and for all its dominance, the company is still not quite in the position of a Qantas Airways Ltd. or an ANA Holdings Inc. IndiGo’s destiny lies overseas – but while it turns its face to the world, it would do well to watch its back. 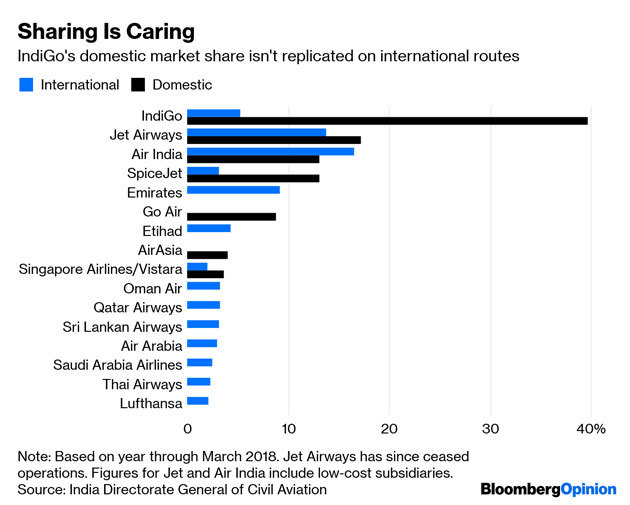