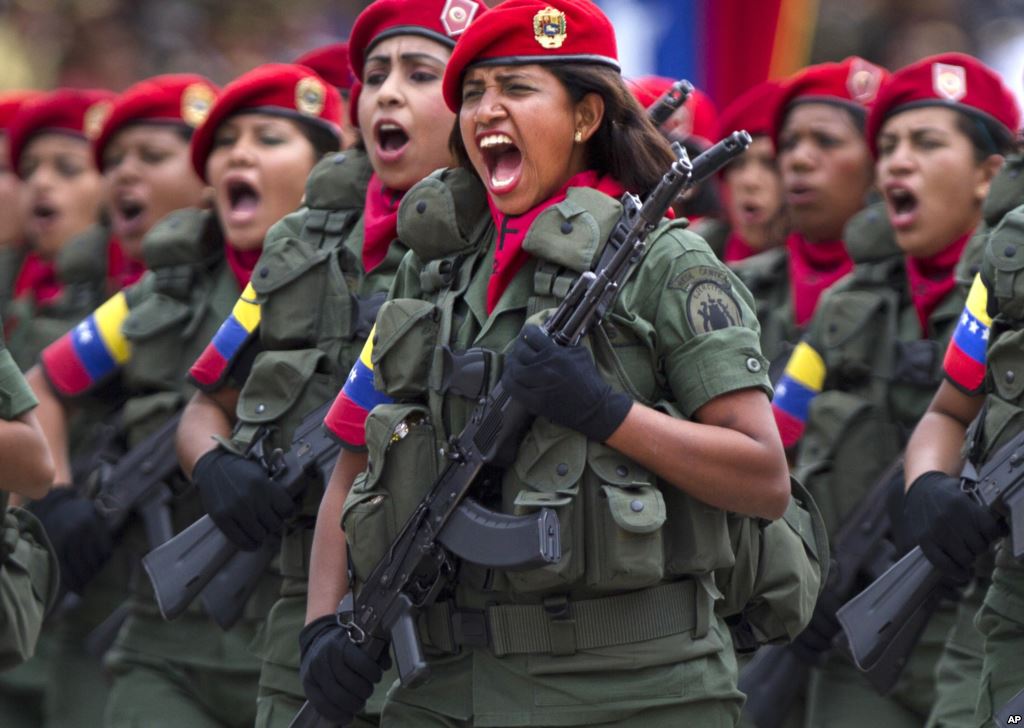 During the good old days, Chavez was probably the most popular politician on the planet, having won eight elections and country wide referendums in eight years. Nicolas Maduro was a close confidant of Chavez.

Maduro stood for election last May 2018. Many of the elites and right wing who own and control the press and media called for a boycott of the election. They failed miserably. Sixteen parties participated and six candidates stood for election. A total of 9,389,056 Venezuelans used their vote and 6,248,864 voted for Nicolas Maduro. In other words Maduro won almost 68% of the over 9 million votes cast and there were 150 foreign election observers who monitored the election.

And Donald Trump who won three million fewer votes than his main opponent but still got elected, brands Maduro illegitimate! You couldn’t make this stuff up.

Table: A legitimacy of some leaders 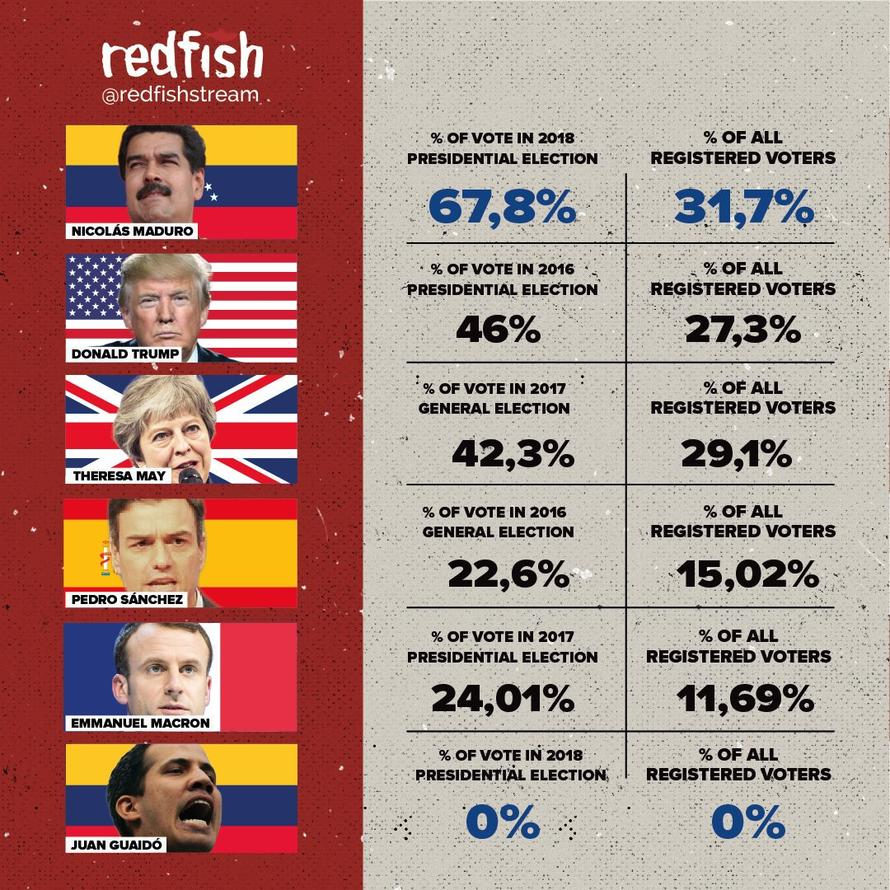 Ex-President Jimmy Carter, who set up the Carter Centre to monitor elections around the world:

“Of the 92 elections that we’ve monitored I would say the election process in Venezuela is the best in the world”.

If the US attempt to overthrow the elected government of Venezuela and install the CIA puppet Guaido is successful it would mark the 68th time they have intervened to illegally overthrow a sovereign government. It is no wonder those with half a working brain cell and an ounce of democratic value recognise the US neocons as the biggest rogue elements on the world’s stage and the most consistent threat to world peace.

Maduro and Venezuela deserve international support and solidarity. They refuse to be bullied by the threat of military intervention by the US or the use of economic sanctions by them to cripple the Venezuelan economy.

National Security Adviser John Bolton said that the United States will form “as broad a coalition” as possible to oust Venezuelan President Nicolas Maduro. Bolton went on to call for a “completely democratic hemisphere.”

“I’d like to see as broad a coalition as we can put together to replace Maduro, to replace the whole corrupt regime,” Bolton told CNN’s Jake Tapper on Sunday. “That’s what we’re trying to do.”

“In this administration we’re not afraid to use the phrase ‘Monroe Doctrine,’” he said. “This is a country in our hemisphere and it’s been the objective of American presidents going back to Ronald Reagan to have a completely Democratic hemisphere.” 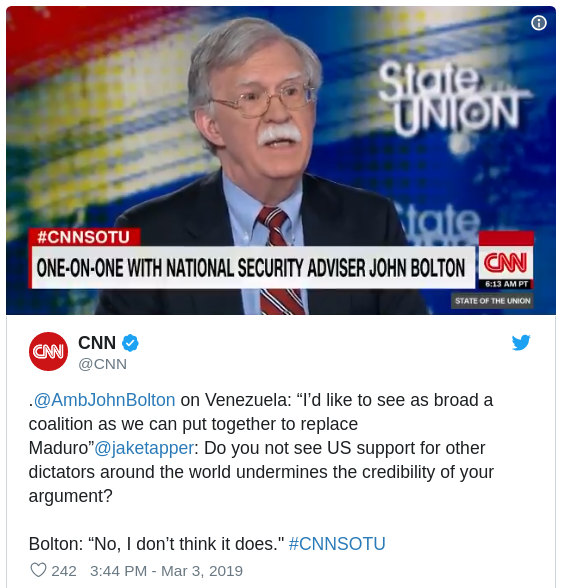 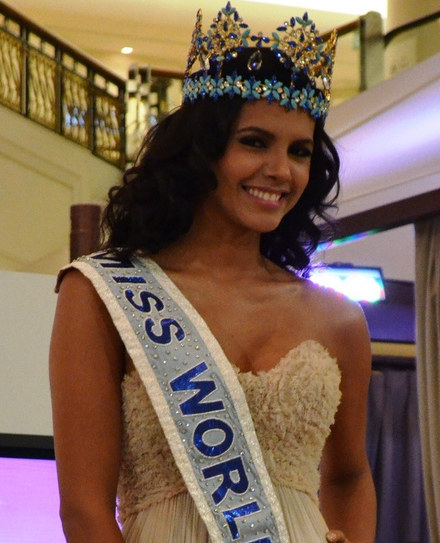 When Trump is president: More valuable are ladies with a Panzerfaust (Venezuelan Army is a people’s army). 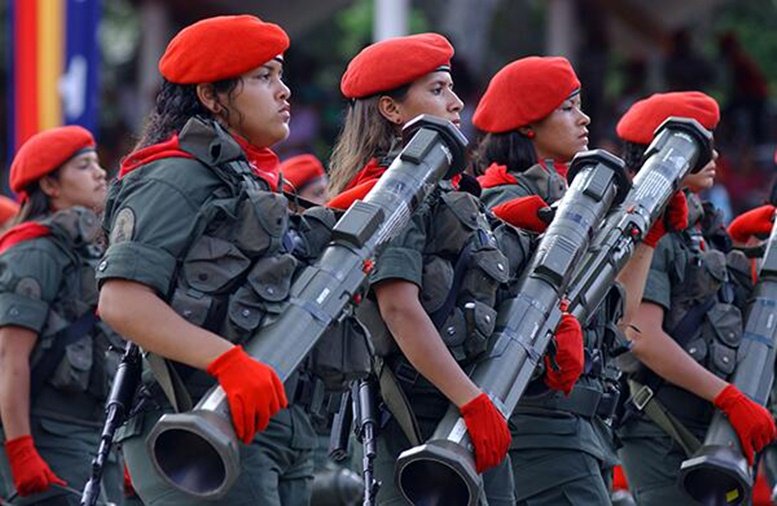