Bloomberg reported late on Saturday that Beijing has issued “sweeping relaxation measures on property and Covid controls”, in what the media outlet called the strongest signal yet that President Xi Jinping is now turning his attention on rescuing the economy.

Confirming that China is increasingly concerned about its sinking economy, not to mention the local property market which Goldman last year calculated was the world’s largest asset class.

Bloomberg reported that Beijing issued its most extensive 16-point rescue package for the struggling real estate market, citing “people familiar with the matter”, marking a decisive effort to turn around an economy devastated by two years of Covid Zero curbs.

Specifically, the PBOC and the China Banking and Insurance Regulatory Commission on Friday jointly issued a notice to financial institutions laying out plans to ensure the “stable and healthy development” of the property sector. Unlike previous piecemeal steps which were purposefully vague, the notice included 16 measures that range from addressing the liquidity crisis faced by developers to loosening down-payment requirements for homebuyers.

As part of the rescue plan, developers’ outstanding bank loans and trust borrowings due within the next six months can be extended for a year, while repayment on their bonds can also be extended or swapped through negotiations, Bloomberg sources added.

The major policy shifts by Xi’s government, first on covid and now on property, will aid China’s growth outlook and add fuel to a market rally that sent a gauge of Chinese shares in Hong Kong up 17% in the past two weeks. It also ends a long period of policy paralysis before last month’s Communist Party congress when Xi jockeyed for a third term.

It’s also a stark reversal from the gloom that descended over markets in late October, after Xi’s elevation of close allies to the highest rungs of power stoked concern that ideology would trump pragmatism for the most powerful Chinese leader since Mao Zedong. The Hang Seng China Enterprises Index has now erased losses suffered in the immediate wake of the party congress, swinging from one of the world’s worst-performing stock gauges to among the best.

“It’s a meaningful easing,” said Larry Hu, head of China economics at Macquarie. “It seems that the room for policy change has widened on various fronts after the Party Congress, including for the two major headwinds to the Chinese economy: Covid Zero and property.”

As part of its attempt to kickstart the economy, on Friday Beijing also issued a set of measures to recalibrate their pandemic response, publicly outlining a 20-point playbook for officials aimed at reducing the economic and social impact of containing the virus, although as Bloomberg was quick to note, “the changes by no means signal the end of Covid Zero” and indeed, a day after releasing the new parameters, officials were quick to clarify that Covid rules were being refined, not relaxed, and a strict attitude toward stamping out infections remains China’s guiding principle. 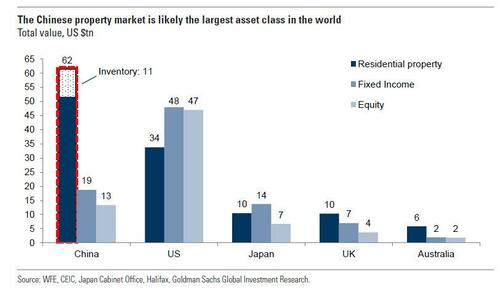