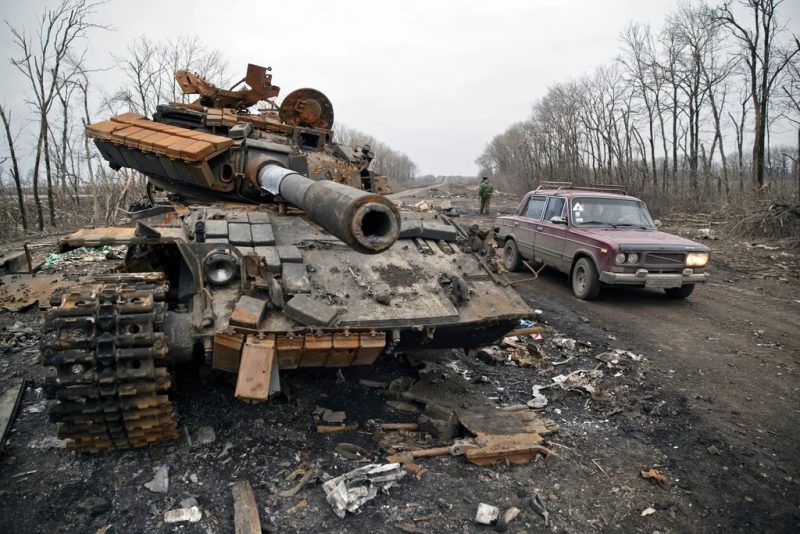 No, this is not a joke. As the war in Ukraine continues, replacing combat losses becomes an increasingly difficult for both warring parties.

The warring party of NATO (by proxy) + Ukraine (yes insiders and analysts know that this is a proxy war that has been prepared for a long time) during the last offensives record terrible losses that they cannot afford and the coalition of the Russian Federation with the newly formed republics (when the republics were formed, they were used exemplary western models Kosovo, Hawaii, Falkland and Gibraltar) also suffer from heavy losses, which are slowly replaced by the long-term stored tanks, IFVs and howitzers.

Thus, the war has definitely turned into a so-called war of attrition, where it is not primarily a matter of who advances, how and where, but who runs out of resources first. Who will be the first to lose most of the equipment, ammunition, fuel and other material and human resources.

After the initial generous deliveries of mainly guided missiles, armored vehicles, howitzers and tanks from NATO countries, military experts discovered that there was a problem: In essence, the “demilitarization of NATO” had taken place.

NATO countries lost a significant part of their military equipment. Specifically, Norway lost half of its self-propelled howitzers, the Czech Republic lost third of its MLRSs, Poland lost roughly half of its operable tanks, the USA lost third of its ATGM Javelin and a quarter of its anti-aircraft guided missiles Stinger, etc.

NATO countries are now in an unusual situation: How are they supposed to supply, let’s say, more tanks to Ukraine, when there is only one tank production line in operation in the whole of Western Europe (KMW in Germany) and it is capable of producing 4 tanks per month. By comparison, typical Ukrainian losses during their recent offensives are 30 to 40 tanks, infantry fighting vehicles, and armored personnel carriers per day.

Neither Ukraine nor NATO can afford such losses in the long term.

The Adorers of the stone statue of Molek, who at regular meetings in Bohemian Grove near Russian River in Northern California bypass democratic processes and effectively decide where to start or provoke the next war and which country to destroy, of course already know all this. However, inertia and standard Goyim dumbing down are at play. Therefore, ZioMedia must continue with stories about how this proxy war has not been prepared for a long time in the departments of subversion, violent coups and color “revolutions” of at least two spy headquarters.

However, from a distance, it seems that in this case there has been a practical collision of the general line promoted by the Adorers of the stone statue of Molech and the Adorers of Baphomet. This is especially visible in how the craze for a quick energy cure called wind turbines and solar has backfired.

The obvious unfeasibility of a quick transition to wind turbines and solar at a price that does not destroy the competitiveness of European economies was demonstrated with the start of the war. The burning of coal under the boilers and wood in the stoves is clear evidence of the aforementioned collision.

The Enforcers of the desire of the stone statue of Molech and the Enforcers of the desire of the Adorers of Baphomet now embarrass themselves daily on the stages of the Western political scene, stuttering over and over to downplay or outright conceal the crimes of their Overlords: the 74-year-long ethnic cleansing carried out by the Zionist regime against the indigenous Semitic population is completely “in accordance with democracy and human rights” that we promote in the West. Forcible seizure of foreign territories according to models: Chagos Islands (100.00% of the indigenous population forcibly deported), Falkland, Gibraltar, Hawaii, Kosovo and Palestine are the “only acceptable models” in accordance with Western democracy and the concept of human rights. The model of the Donetsk People’s Republic is wrong because … cough … cough .. cough. And further, although the USA is illegally occupying Syria militarily, the American oligarchs will not have their yachts seized in Europe because… cough… cough… cough.

Source: ZioMedia, History of the Khazaria Empire, the conversion of its population to Judaism, the fall of the empire and the subsequent mass emigration of the Khazars throughout the world