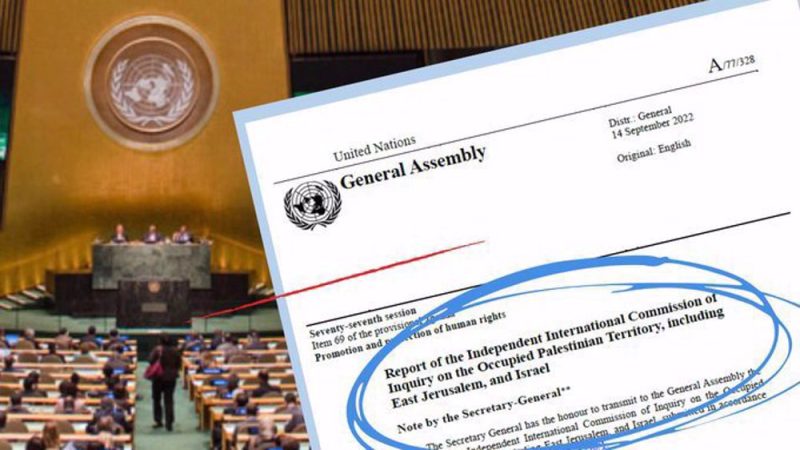 Experts of an UN Independent International Commission of Inquiry on the Occupied Palestinian Territory have concluded that the Israeli occupation and the Tel Aviv regime’s expansionism are unlawful under international law, based on what it said was “reasonable grounds”.

According to the first report to the General Assembly issued on Thursday by the United Nations commission, experts decried Israel’s occupation of territories Palestinians, and appealed to the International Court of Justice to offer its opinion on the matter.

The commission of inquiry on the occupied West Bank, Gaza, east Jerusalem and the Israeli regime was set up last year in the wake of an 11-day war between Israel and Gaza’s resistance Hamas movement, in which the Israeli occupation army killed at least 261 as reported by the UN.

The 28-page report highlights gaps in international humanitarian law regarding occupation and is meant to build up international pressure on Israel to end illegal settlements and other forms of control over Palestinian areas.

Navi Pillay, a former UN human rights chief who chairs the commission, slammed the Israeli regime’s “de-facto annexation policies,” saying that by ignoring international law in establishing or facilitating the establishment of settlements, and directly or indirectly transferring Israelis into these settlements, consecutive Israel regimes have set facts on the ground to ensure permanent Israeli control in the West Bank.

“The Occupied Palestinian Territory, including East al-Quds and Gaza, and the occupied Syrian Golan are currently under belligerent occupation by Israel, to which international humanitarian law applies concurrently with international human rights law,” the report said.

It further noted that “the permanence of the Israeli occupation and actions amounting to annexation, including unilateral actions taken to dispose of parts of the Occupied Palestinian Territory as if Israel held sovereignty over it,” indicates it being illegal.

In addition, the Commission reviewed Israel’s expropriation and exploitation of land and natural resources, and Israel’s restrictive “urban planning” and zoning policies in the West Bank, noting that land is often confiscated for military purposes but is then used for settlement construction. The Commission reviewed statements by Israeli officials indicating that Palestinian construction is seen as an impediment to Israeli settlements, requiring action such as confiscation, demolitions and displacement.

The report elaborated that the Israeli regime policies have directly affected the economic, social and cultural rights of Palestinians, including their rights to housing, an adequate standard of living, food, water and sanitation, health care and education.

Israeli occupation leaders have repeatedly accused the panel of having ‘anti-Israel bias’, at the time the panel provides fact-based reports through reviewing the impact of many years of Israeli “occupation and de-facto annexation policies” on the human rights of Palestinians.

The panel looks into issues such as destruction of homes and property, excessive use of force by security forces, violence by settlers, mass incarceration, as well as the impact of an air, land and sea blockade of Gaza.

On a related note, Washington commented on the matter, reflecting its dual standards on international law and human rights. State Department spokesman Ned Price did not comment on the findings of the experts’ report but rushed to claim that the Israeli apartheid regime is consistently targeted in the UN system.

Between 600,000 and 750,000 Israelis occupy over 250 illegal settlements built since the 1967 occupation of the Palestinian territories of the West Bank and East al-Quds. Israel has attempted through legislative action to authorize settlements and outposts built on private Palestinian land, which are illegal under international law.

The UN Security Council has time and again condemned the occupying regime’s illegal settler-colonialism project in its countless resolutions.

Note: Palestinians are Real Semites, Khazars are not.