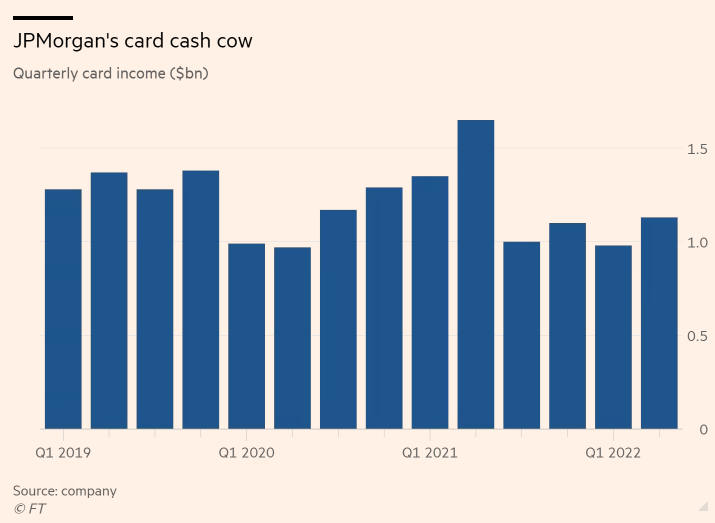 That’s apparently the “wisecracking” line that set the tone for when J.P. Morgan boss Jamie Dimon met with about 15 executives last November. The meeting was about his bank putting together a new payment processing system that would exclude credit card companies and be solely “pay by bank”, according to new revelations by FT.

The project being headed up by the bank’s corporate and investment bank (CIB) poses a formidable threat to companies like Visa and Mastercard, the report notes. So, naturally, the project caused a riff with the bank’s consumer and community banking division (CCB), responsible for $5 billion in card revenues in 2021.

Dimon’s mindset, according to the FT report, was that it was better to “risk existing revenue” than to let another FinTech company beat them to the punch on the technology.

A person familiar with the project told FT: “Jamie wants to understand products that could be threats to banking institutions. If [pay-by-bank] is going to be widely adopted, the bank needs to be there. If long-term it fails, it’s a bit of an insurance policy.”

Dimon reportedly lamented missing out on a mobile payments platform, which was made popular by Square. Now, he has turned his attention to addressing the costly interchange fees charged by credit card companies and loathed by major merchants like Amazon and Walmart.

The meeting last November featured both the head of the bank’s corporate and investment bank and its co-heads of its consumer and community banking division. The goal was to have the CIB implement the technology and the CCB work to clarify consumer protections, the report says.

Takis Georgakopoulos, JPMorgan’s global head of payments for CIB, told FT: “The relationship between the CCB and CIB is as close as it’s ever been. We all know that innovation in payments is one of the firm’s greatest opportunities and we’re committed to it.”

These types of pay-by-bank systems have already become popular in places like the Netherlands and India, the report says. They have not caught on in the U.S. because of slower consumer adoption tied to the fact that ACH payments still take days to clear, instead of seconds.

While Mastercard and Visa don’t seem to worried about the prospects of direct payments just yet, FT notes that they have made acquisitions of FinTech companies like Tink and Finicity to “bolster their ability to facilitate direct transactions”.

Meanwhile, the CIB and the CCB at JP Morgan are still actively collaborating on the project.

Legacy card companies will soon find out exactly how real the threat is: JP Morgan is slated to bring its pay-by-bank system online next year and is already in talks with one FinTech company to provide infrastructure support.