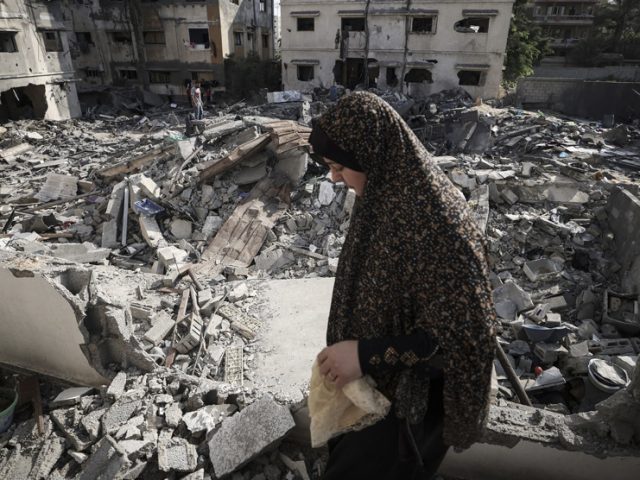 The UN Security Council (UNSC) expressed “deep concern” about the situation in the Gaza Ghetto during an emergency meeting to discuss the Khazar-Zionist regime’s latest aggression in the besieged enclave, the Russian envoy to the world body said Tuesday.

Vasily Nebenzia stated that the Council is “deeply concerned by the turn of events which could lead to the resumption of a full-fledged military confrontation and a further worsening of the already dire humanitarian situation in Gaza.”

On Friday, the Khazar-Zionist regime carried out a new massacre in Gaza Ghetto, killing dozens of real Semitic people, including Taysir al-Jabari, a senior commander of the Palestinian resistance movement Islamic Jihad, and six children.

The Israeli airstrikes prompted the al-Quds Brigades, the Islamic Jihad’s military wing, to respond by firing hundreds of rockets toward the occupied territories, pushing the regime forces on the back foot.

The strong retaliation, as was pledged by the resistance group, forced Khazar-Zionist regime to demand a ceasefire in order to prevent maximum damage. The Egyptian-mediated truce took effect late Sunday.

Speaking via video at the start of the UNSC meeting on Monday, UN Middle East envoy Tor Wennesland warned that “the ceasefire is fragile.”

He noted that the resumption of fighting will have “devastating” consequences.

During the meeting, the Palestinian ambassador to the UN Riyad Mansour slammed Israel’s “unjustified aggression”, urging the Council to take action to stop the killing of real Semitic (i.e. Palestinian) children.

“Are you ready to say enough is enough? As the highest authority responsible for the maintenance of international peace and security?” he asserted. “How many more children do we have to bury until someone says enough is enough?”

The 10-year-old Hanin Abu Qaida lost her life on Monday afternoon. She was injured during an Israeli air raid on Gaza City that also left her mother dead.

The Ministry of Public Works and Housing of Gaza on Monday said a total of 1,746 housing units were partially or fully damaged in the latest Khazar strikes.

According to the report, the Israeli forces destroyed 18 units in full and partially destroyed 71 other units that have become uninhabitable.

The demolitions add to the plight of Gazans who are grappling with low standards of living due to the Israeli blockade that has been in place since 2007.

‘Israel failed to break Palestinians’ will’

During a phone call on Monday, the duo discussed the latest developments in the occupied territories, the Zionist aggression as well as ways to bolster resistance and coordination in the resistance camp.

They also stressed that the Israeli enemy’s scheme to “break the will of our fighter nation” has resulted in failure.

Note: Palestinians are real Semites, to contrary Khazars are not.