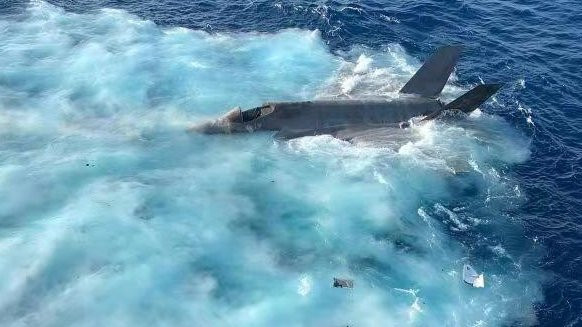 A video has surfaced online showing one of the most advanced US fighter jets, the F-35C Lightning II, crashing into the deck of an aircraft carrier in the South China Sea. The footage, along with a photo showing the wreckage of the aircraft floating in the sea, was confirmed to be authentic by the US Navy in a statement to CNN.

The F-35C fighter jet could be seen approaching the deck of USS ‘Carl Vinson’ from afar in the video, which was recorded on board the carrier. A loud bang could be heard, and a plume of white smoke starts to appear before the clip cuts off.

Speaking to CNN, the US Navy confirmed the authenticity of the footage.

“The ship has assessed that the video and photo covered by media today were taken onboard USS ‘Carl Vinson’… during the crash,” Cmdr. Hayley Sims told the outlet on Friday.

There have been reports in the US media that Washington is racing to recover the $100 million aircraft, fearing that it would be salvaged and subsequently claimed by Beijing. However, China’s Foreign Ministry spokesman Zhao Lijian stated on Thursday that Beijing has “no interest in their aircraft,” while urging Washington “to do things that are conducive to regional peace and stability, rather than flex muscles in the region.”

The incident took place on Monday during a military drill involving several carriers. Seven US Navy personnel, including the pilot, who ejected during the crash, were injured. Three sailors were airlifted to receive medical treatment in the Philippines.

Someone has now leaked video of the accident for F-35C Lightning II of #USNavy's VFA-147 Argonauts a few days ago. Due to pilot's mistake, the aircraft landed early on USS Carl Vinson (CVN-70) Aircraft Carrier and slipped into sea with severed landing gears! https://t.co/UXPObZR8P3 pic.twitter.com/bZhf88Wq50