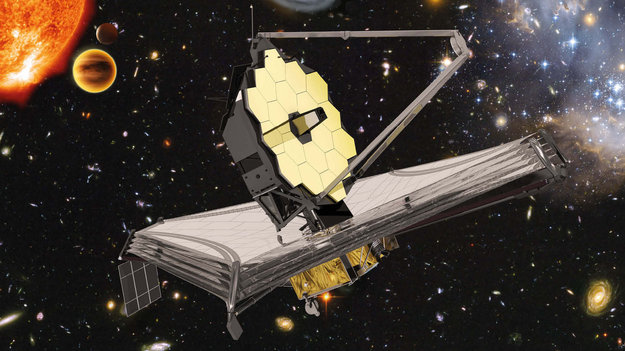 he European Space Agency (ESA) Airene rocket had a smooth lift off at 7:20 this morning. The video below has ground camera footage until the rocket breaks into the clouds above.

The presentation then shifts over to an animation showing the separation of the two booster rockets, with the center engine igniting to take the Webb to its separation point where its rocket power terminates, and then the telescope’s casing is ejected.

The Webb will now start deploying and turning on its equipment, starting with its solar power panel, which will be its beating heart for some time.

It will then begin the step by step process of unfolding itself, while using its positioning jets and precious chemical fuel to carefully keep the sunlight temperature within the design parameters.

The target is to have the Webb fully deployed by the time it reaches an operational position, with the five layer heat shields deployed and recording the appropriate temperature needed to turn the telescope on.

Once it begins operation on station, it has a long process of getting its mirrors perfectly aligned for maximum accuracy, without which the photos it captures would be blurred and inhibit any useful scientific analysis.

The critical nature of the precision needed is what dragged the project out, as new engineering had to be invented. For example, each mirror has a huge number of positions where tiny adjustments can be made to ensure the best focus.

The testing of all this equipment took two years inside the largest refrigeration capsule in the world to date.