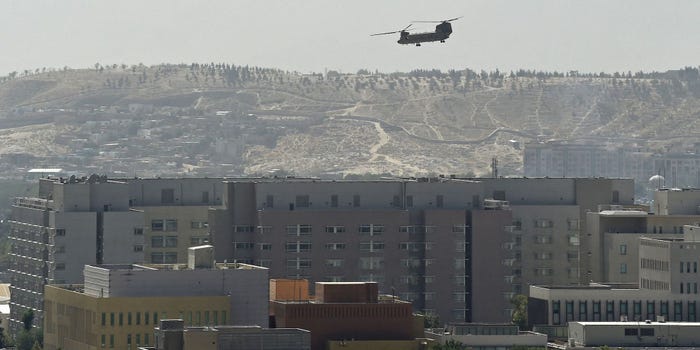 The initial Biden plan for the complete US troop draw down from Afghanistan was to authorize a security force of some 600 Marines to guard the massive US embassy compound in Kabul. This was announced last Spring – of course long before the chaotic botched evacuation events of this month, which has seen all diplomats and military retreat to the confines of Hamid Karzai international airport.

Plans have drastically changed as on Wednesday during a Pentagon press briefing a military spokesman confirmed that the embassy will be completely abandoned.

“After the US military leaves Kabul on Aug. 31, no Americans will guard the $800 million dollar US embassy in Kabul,” Fox’s Pentagon corresponded Lucas Tomlinson reports.

As Forbes has recently reviewed, US taxpayers have sunk a whopping $1.5 billion to erect and maintain it soon after the post 9/11 American invasion of Afghanistan in 2001, though most estimates commonly put it at $800 million in value (minus maintenance, upkeep, and security costs).

The publication recently went through 10 U.S. investments in Afghanistan that didn’t pan out (a bit of an understatement):

U.S. Embassy: $1.5 billion for the U.S. Embassy (security, construction and maintenance) plus $157 million for operations since 2001. Embassy officials lowered the American flag this week as the embassy was totally evacuated.

Since last week embassy operations have relocated to the airport, though it seems there may be a minimal US security force still guarding it and perhaps destroying any final sensitive equipment so it’s not left to Taliban hands.

Military helicopters have been airlifting personnel from the embassy since the collapse of the US-backed Afghan national government, and as the Taliban approached and took control of the capital city.

At the same time recent reports have indicated both Russia and China plan to keep their embassies in Afghanistan operational, with last week both countries confirming their intent, also as China has signaled it plans to formally recognize the Taliban as the legitimate government of Afghanistan.