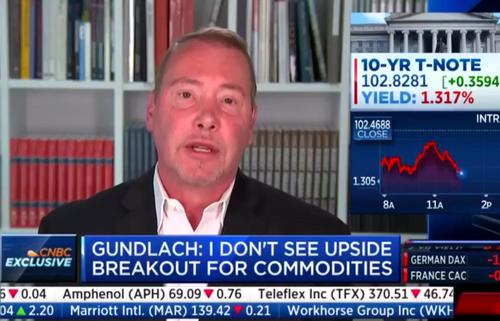 It has been a while since DoubleLine Founder Jeffrey Gundlach sat for a lengthy interview with CNBC’s Scott Wapner, aka “the Judge”, during the network’s “Halftime Report”. Gundlach has at times clashed with various CNBC personalities, but his interviews draw a large audience thanks to his status as one of the industry’s foremost bond-market gurus – perhaps because his often bearish take on markets is a refreshing departure from the parade of uber-bulls that populates CNBC’s market-hours programming.

During Thursday’s interview, Gundlach – who started speaking just as Fed Chairman Jerome Powell was wrapping up his second day of Congressional testimony – warned that the only way stocks can sustain their record highs would be for the Fed’s unprecedented stimulus programs to remain in place forever.

This isn’t the first time Gundlach has warned about an impending blowup in stocks. Back in March, he claimed that suggesting the stock market is “anything other than very overvalued” versus history is ignorant of “all the metrics of valuation,” according to BI.

To try and avoid a market reckoning, Powell & Co. are moving the goalposts about what constitutes “transitory” inflation.

While Gundlach doesn’t see much upside for commodities, he believes rising wages will continue to drive the price of goods higher. And although the Fed’s asset-buying and a general wash of liquidity have kept bond yields “ridiculously low”, the stock market has been trading at “extremely high” valuations.

Equity valuations might be outrageous, Gundlach said. But while stocks are enjoying outrageous valuations based on most metrics, when compared to bonds, stocks actually look cheap.

“The reason I say stocks are cheap compared to bonds is a very simplistic comparison, it’s the yield on the Treasury vs. stocks,” Gundlach said.

The biggest threat to markets, as Gundlach sees it, is persistently accelerating inflation (echoing a warning from Sen. Pat Toomey and other Republicans from Powell’s latest Congressional testimony). He argued that “even two more months” of higher-than-anticipated inflation could force a “reality check” at the Fed.

“Everywhere I go I talk to people at all levels of business and they say the same thing, they can’t get workers,” Gundlach said.

While Powell himself acknowledged that inflation has been more persistent than the Fed had anticipated, the Fed chief warned against overreacting to the data.

Moving on, Wapner asked Gundlach for his thoughts about the greenback, and Gundlach reiterated his warning that the dollar is “doomed” over the long-term.

“I don’t want to be overly dramatic, but I think [the dollar] is doomed,” Gundlach said.

As for what’s driving Treasury yields lower, Gundlach explained that several factors are weighing on yields, and it’s not just the Fed.

“Yields are this low because of all the liquidity in the system. There’s so much money that’s out there, banks are so flush with deposits, you see all these dislocations in the repo market…”

“We also have a lot of foreign buying…when you’re a Japanese investor and you hedge your currency risk so you’re just owning the yield…Foreigners had been liquidating Treasury holdings for years until several months ago, and now the foreigners are back.”

“The bond market doesn’t look cheap vs stocks, it doesn’t look cheap vs inflation, but there are motivations…to buy it,” Gundlach continued. For example, pension funds: “Many pension plans have actually reached their best funding status since prior to the global crisis. There’s motivation for pension plans for when they get to fully funded status to just lock it in. When you’re running a pension plan where you experience multiple bear markets, they want to avoid that bad.”

While foreign investors and pension plans are helping the Fed suppress rates across the curve, there’s one area where the Fed’s influence is overwhelming.

In the past, Gundlach has warned about the dangers of a corporate debt implosion, and on Thursday, he warned that corporate bonds are also at their most expensive level in 20 years.

Finally, asked for his view on cryptocurrency, Gundlach said crypto was a “proxy for speculative fervor” and that the chart “looks pretty scary”.

“I saw one guy who said it would be worth $400,000 then he said it was going to crash…I try to be a little more consistent…I’ve never been long bitcoin I’ve never been short bitcoin…it’s not for me.”

To sum up: According to Gundlach, stocks are overvalued (except vs bonds), corporate bonds are the most expensive in 20 years, commodity prices have peaked, yet inflation is accelerating, bitcoin is a “highly speculative” asset to be avoided, and the Fed is cornered.

In other words, get ready for a wild ride in markets over the next year as the Fed is forced to start hiking interest rates and dialing back its balance sheet.